No this is not a spam blog post. Just bear with me. I think I have emerged from the ashes of the Copenhagen Marathon a new runner. Somewhere over the course of the last few months, my running has become more about proving something and feeding my ego than it should be. Running is something I have turned to for many years for fun stress relief. And the way it gradually became the biggest source of stress in my life is a shame. I remember saying to SR at one point that every time I hear the beep of the garmin starting, even when I'm not about to run, I get a panic type of PTSD reaction. Don't get me wrong, I still believe in running intervals, but it doesn't have to be with so much associated stress, does it? I would be lying if I said it had nothing to do with reporting my times on the blog. It has been a motivator, but has made a bit of a monster out of me as well.

And sometimes I cheated on my old love, running. Because all of my running sessions needed to serve a purpose and were always associated with a time/times to report, I began to enjoy swimming and cycling more than running. They were my times to just be happy. Realizing my bikini line was inadequately shaven while standing at the pool edge, bright red circle imprints around my eyes from my goggles and getting a young moth stuck in the medial canthus of my eye while cycling at high speeds. These were marks of pride and moments of joy.

And maybe the reason I have run more miles barefoot than with shoes since the marathon is it is stress-free (and also because I don't notice my hip feels injured when I run barefoot).

At the start line of the Copenhagen Marathon stood two girls. They had very similar 10k, 15k and half marathon PRs. They knew each other only peripherally, yet enough to be aware of what each others' time goals were. They both set goals which were unrealistic. But it was pride that drove them to their demise. I saw the other girl after the half marathon turn around point. She had gone through the half marathon in around 1:34 and, if you've ever seen a nauseated ghost, this is how she looked. And as the other girl (me), waved to her and forced a smile, I realized I felt like she looked. We would both be forced to drop because our egos pushed us too hard.

What I have to keep reminding myself is there is a difference between proving and improving. The first is futile. I love the story of the mythological Phoenix, who bursts into flames and dies only to be born again. A bit dramatic for a DNF in the Copenhangen Marathon? Well, yes. But nothing wrong with having a new outlook. If I can't enjoy my training and racing, it's pointless. The next two races on our schedule are the 24Run relay in Holte in about 10 days and the Storbælt Naturmarathon (instead of Aabenraa. Thanks, Lars!) the week after. If nothing else, they will be fun. Especially because I get to run with this guy (yeah that's my man nearing the end of the CPH marathon): 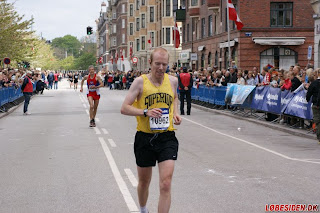 Now if you are the first to explain the title, you get a virtual high five. Wow! So there ARE some good giveaways here once in a while.

Running Song of the Day: All the Right Moves by One Republic
Posted by sea legs girl at 20:56

I am impressed with how quickly you came to these understandings and changed your outlook.
Have a wonderful time at your runs coming up!!

I recently discovered your blog and have really enjoyed reading it. I can absolutely relate to the fun going out of running sometimes and needing to free myself of any kind of pressure or outward praise.

Good luck with your upcoming races.

yep, pretty smart analysis I agree. Enjoy getting back in touch with your love of running...

Just look as it as a wake up call and get back to basics: the true love of running.
Maybe you should do like Olga for a while: leave the watch at home. Just run for the fun of it. Who cares how far you run, as long as you enjoy it?

I also have to explain that Olga's smiley has a bit more meaning behind it since I had been thinking a lot of things I wrote, but hadn't realized that my readers (including Olga, who wrote to me about it) had been thinking the same things and were concerned. Thanks, Olga!

Hey hey, Tam. Thanks for taking the time to comment. Always nice to meet people who can relate.

Fancy title. Do you know Greek, or did you have to look up Phoenix in google translator like I did?
So glad you're feeling better about your running. Isn't that what it should be about most of the time, just the pure enjoyment of getting out there and moving?
Do you always run with your Garmin? I freaked out the day my watch battery died, and I've been to lazy to get it replaced. In some ways, though, it's made me love my runs more, because I don't stress if I have a bad running day. I just go out and do my miles. Of course, I'm not training for anything at the moment, so it doesn't really matter to me. Maybe I'll have to try some barefoot running, too. :)

Sorry to double post, but my typing error is driving me crazy. I meant to write "too lazy." I can't have the blogosphere think I don't know the difference between to and too.

Ouch that one went straight in....I've had this habit of never looking at the watch, just to keep the lovely surprise of how fast I ran in how short time - in order to hurry back to register it on my log! And always hoping for longer distances than the others on the site.

Now I'm working hard on getting back to running after injuring myself and having had to miss my first half marathon....

And man, do I now use my watch as a help to understand and believe what my body tells me....

"If I can't enjoy my training and racing, it's pointless."

Does everything have to have a point?

Still, it IS important to learn how to have fun while pushing oneself.
I also think it would've been a good thing if you hadn't dropped out of the marathon. There's a lot one can learn in the death march to the end... and, since the pressure to do well is off, it's possible to enjoy it (if you're not me).

Diana,
Well, I actually DO know some Greek: the alphabet and how to read it (sort of) and how to say a few basic things. My ex-husband's mom was Greek and I spent some time in Greece. But I had to look it up anyway, just to make sure :).

Steve Q, well, everything doesn't HAVE to have a point, but it's usually preferable. Sometimes the point is just it makes you happy. If there's no "point" you might wonder why you waste your time. But I do know what you mean about self-torture. It certainly has its role in happiness.

Thank you also to everyone for your really great and supportive comments. Like Henriette said, "certainly a delightful running June" coming up. I hope the same for everyone.