Certainly there is something mania-inducing about running a marathon hard (that is what we did yesterday). Why is it that after going to bed at 11:30, I wake up at 4:45am wide awake, looking at my two sons next to me, bursting with love and filled with energy wanting to write a blog post? Well, my sympathetic nervous system is still on overdrive, that's why. (Chemicals, don't strangle my pen! (reference, anyone?))

And maybe we shouldn't run so many marathons. It has been 4 weeks since my 50k trail PR at the Glacial Trail and 5 weeks since both of our marathon road PRs in Milwaukee.

The race du jour was Løberen Skovmarathon, a trail marathon outside of the city of Hillerød, in northern Sjælland (is anyone who reads this even interested in where in Denmark these races are run? How many people, I wonder, who read this blog have gotten so far as to look up where Denmark really is, like precisely? (personally, despite having lived for two years in France, I did not know exactly where Denmark was before meeting SR)).

There were just under 200 runners in the marathon, though 2659 participants in the 10k, half marathon and marathon all together. Big race!

We have not run this before and didn't know if it was hilly or technical or what. But we knew it was all on trails.

They have this ingenious set-up where 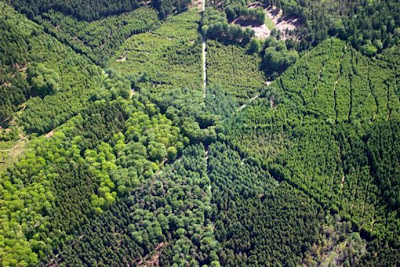 the trail is like spokes of a wheel and you keep running back to the center where there is an aid station with water, sports drink and bananas. (I have perhaps mentioned before how I get extreme low blood sugar from eating bananas while racing, so I had my large stash of chocolate in my belt like usual).
Then you run around some of the periphery back to the start, where you have completed a half marathon. And then you do it all again (this time hopefully faster :). 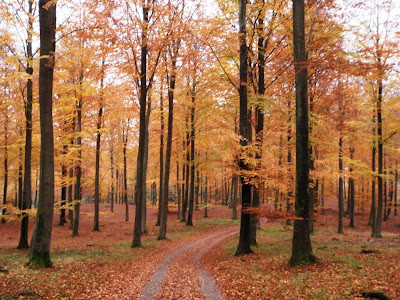 and it is very representative of the race and of Fall in Denmark.

As is usual for me, I ran after pulse/perceived exertion. This leads me to start out very slowly because right when I start, my pulse surges. When I get into my groove, I start passing people, pulse unchanged. Yesterday was no exception.

I came through the half marathon in 1:43 on the button.

Here was SR coming through the half marathon quite a bit earlier in 1:27:11. 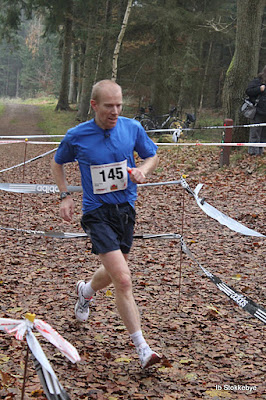 And then I said to myself - now you can really start running and I allowed my pulse to rise a bit. I picked up the pace to sub 7:30 min/mile. It lasted quite a while. I had thought a PR might be possible, but the hills and dirt wore me down too much, I guess. With 4-5k left to go, I became extremely nauseated and almost needed to walk. I thought I would throw up but didn't. I don't really know what happened, but certainly it was related to my being so nervous before the race and having to run to bathrooms/woods with stomach problems many, many times before we started. Plus I think I just reached the point of exhaustion. Better it happened at mile 24 than at mile 16 where it always used to hit me (yes, it is all about not starting too fast. I have learned SOMETHING after nearly 30 marathons and ultras). 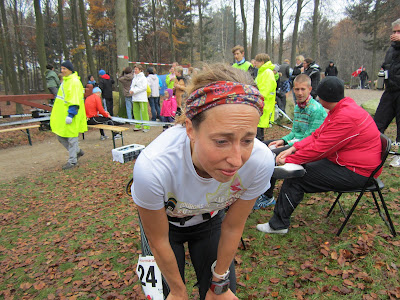 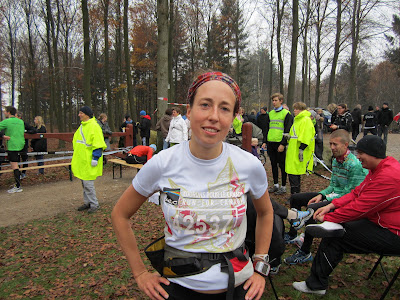 Feeling like maybe the burst of speed that came from pregnancy isn't going to give me much faster times than my PR in Milwaukee. Time to integrate some regular speed work.
SR ran in 2:54:17 and had a few second negative split. He took 3rd place in a really tight and tough field. Here he is modeling the "comfy, cozy" fleece from the Glacial Trail 50k. And I am modeling Piccola Pinecone's super cool French Canadian racing shirt. I took second to the amazing Margrethe Frydenborg, below, who killed the course in 3:08:57! 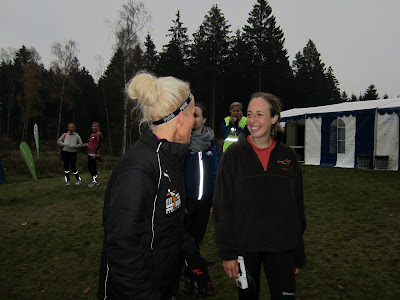 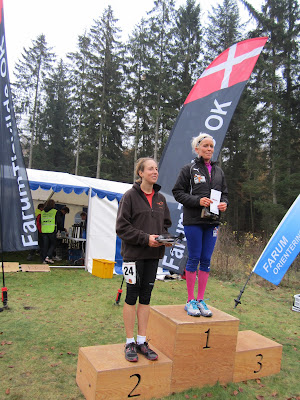 Very fine prizes: 500 kroner gift certificate to Løberen for me plus organic make-up, which is now the only make-up I own! Maybe I should give it a try.

Congrats to Henriette Lisse and Rikke Skudbøl on completing 2 marathons in 2 days! Congrats to Daniel Ditlev and Lars Bergelius on awesome PR's.


(sorry, my odd sense of humor is entirely to blame for the subtitle; this post has, as far as I can tell, very little to do with The Human Plasma Lipidome, which was the title of a review article in this week's New England Journal)

Now I return to studying towards my certificate in Global Health online.
Posted by sea legs girl at 06:08 19 comments: