I have been reading the book Da mennesket blev menneske by Peter Jensen and became interested in the fact that our Australopithecus ancestors, as they moved out of the trees, had a need to run quickly across the African savannahs. Yes, evolutionarily, we are runners. But why is it, I wonder, that some of us are so gosh darn good at running long distances?

The case of May-Britt Hansen and the "ultra gene"

May-Britt, 47, began running 4 years ago and recently became the Danish female champion in the 24 hour run, running about 117 miles.

Here she is running with the guys. 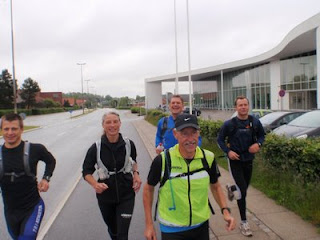 Danish researchers jumped on the chance to do some genetic testing and found she has a double copy (two alleles) of the FTO gene. Carriers of two copies (16% of the Europeans) have a 1.67-fold higher rate of obesity than those with no copies. But this gene may also enhance performance in endurance sports.

On some weekends she runs between 60 and 70 miles, and some weeks this will be her total mileage, but I was unable to find an average amount. More info at her blog http://ultra3460.blogspot.com/ (although it is in Danish).

The case of Helen Lavin

The female record holder at the Voyageur 50 mile is a stand-out ultra-marathoner who began running just 5 years ago. 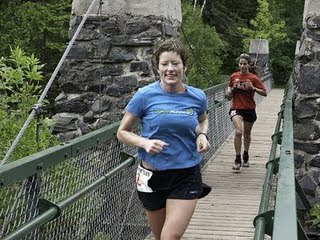 Here she is at the beginning of the Voyageur 50 with Valeria Shuster behind her. Photo courtesy of Jen Pierce.

After the race, I had a wonderful chat with Helen and tried to find the secret to her success.

She says she runs on average 30-40 miles/week during the winter and 50-60 during the summer. I asked about hill training and she said she hasn't really done any in about a year.

One thing she swears by is Bikram Yoga (Yoga at around 100 degrees F) which she does multiple times a week.

I have gathered from her blog http://helenlavin.blogspot.com/ that she doesn't seem to adhere to any particular diet, though has been making an effort to "improve" her eating lately.

One thing is for sure, though, she absolutely loves running. A quote from Helen after 47 miles in the 50 miler "I loved being back in the rocky section."


The case of Jenn Shelton

This is the 25 year old who two years ago broke the female record for fastest 100 miler on trails (this was at Rocky Raccoon in Texas). Her training strategy, according to Christopher McDougal from Outside Magazine, involves waking up and having a veggie burger and then running until she gets too tired to run longer (which ends up being about 20 miles).

She also told Christopher McDougal "I started running ultras to become a better person. I thought if you could run 100 miles you'd be in this Zen state. You'd be the Buddha, bringing peace and a smile to the world. It didn't work in my case. I'm the same old punk-ass as before, but there's always hope."


Let's turn to a guy just to contrast.

The case of Anton Krupicka

He just ran and set the course record at the White River 50 (The USATF 50 mile championship). His time was an incredible 6:32. His training is at 10,000 feet at his home in Leadville, CO. He runs about 160 miles per week (if not injured from exactly that). More info here http://antonkrupicka.blogspot.com/.

But is it actually Anton Krupicka's minimalist approach that makes him so good? 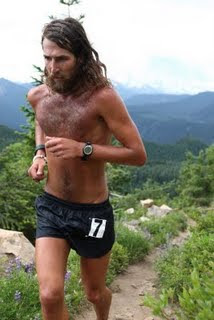 A hair tie would just be too much accessorizing.

But the most amazing thing is, in these shorts, he had stored a water bottle, four gels and a bunch of S-Caps. Where are they?

So women, you might just need to tuck a water bottle and a bunch of food in your compression shorts and, if you can avoid pseudo camel toe, you might have the secret!

What is it that all of these runners have in common? One thing I have noticed, is considering how extremely talented they all are at ultramarathons, none has an exceptionally fast marathon PR. What else? They all make time for very long runs and, well, they absolutely love to run long, long trail runs. And there's no doubt there are multiple genetic factors at play. But I've failed to find any specific training secret. Are there any readers with ideas?

What have I changed? I did just sign up for Yoga again (though no Bikram to be found in Denmark) but I've decided to keep my hair ties. And now that I can get up from the toilet without using my hands after the 50 miler, I might start some serious running.

OMG you are funny. I think we should sent Krupicka a scruchie.

My impression is that a great ultra runner would be someone who has some base talent (I could train my butt off and would never be "great"), loves to run and trains hard AND smart.

I can't even fathom running that far yet! I don't know if ultras are in my future. I'm still working on 5K!

I'm searching that picture of Krupicka trying to figure out where he hides all that in those tiny shorts! That's more than I can carry in my purse!

I had to turn my answer into an entire post.

I used to look like a skinnier, blonder version of Anton.(sigh)
If you look closely, I think the photo shows a black strap over his shorts, which would hold the water bottle at the small of his back.

And I think the ink on races numbers is made from black holes, making one heavier. Note Anton has number 7, Helen 2. I usually get 103 or higher.

I've followed your blog for awhile (I found you when I was curious about what to expect while running through pregnancy) but haven't commented yet.

I am very interested in ultras. I haven't done a full for a long time and am wondering if I could skip a full and jump to an ultra. Right now I'm running to run, not training for anything in particular - but I'll keep reading what you learn too.

Is that a water bottle in those shorts, or are you just happy to see me? ;-)

I take back my strap comment. Now I've spent WAY too long staring at Anton's shorts and have to go do something manly.

Yeah, for those of you who want more info on the subject, see Steve Q's response post, which has lots of enjoyable insignt.

It is awesome to hear from those of you who are getting interested in ultras (and nice to meet you jsmarslender). And Phat Girl Slim, running a first 5k is a much bigger deal than running a first marathon or ultra. I remember my first 5k clearly (in college). After that, I thought, "I am a runner." So cheers to becoming a runner!

I really like your blog...I am an ultrarunner and RN in Texas. I am currently 13 wks pregnant with my first, still running strong, but struggling a little with not being able to plan a big fall ultra run, like I do most years. Your blog is helpful in reminding me the trails will still be there when I come back...and it is still possible to do 50 milers after giving birth!

Awesome, Clea! Thanks for that comment. I wish you a happy pregnancy and hope to hear more from you.

very fun post! and a reminder to me that I do need to put in at least a few serious hill training sessions between now and my race in Sept :)

glad you found a yoga class. i do really think it helps me.

Steve Q - I am sorry to be the one to tell you but really you never looked like Anton ;)

Wow, a fourth comment from me - I have to get my records somehow! I decided I had to do a series of posts about the specifics of what makes a good ultrarunner.

And Helen: I did so. I have the photos. You were about 4 years old at the time and Anton may not have been born yet.

he he - I knew that would get another comment :)

check out the video on Kurt's blog and then produce some photos!!

Wow! I'm so honored to have the former Anton AND a star of my blog post commenting. Who's next? Gandhi?

If you have any time, you should pick up "Born to run" by Christopher McDougall. In it, are a few chapters about a man named Dr. Joe Vigil. Who wanted to figure out why nothing about ultramarathons made sense. Why for instance, nearly 90% of women who enter the Leadville 100 will finish while only 50% of men do. Why the gap between men and women closes the longer the race gets. Dr. Vigils theory as to what makes a good ultrarunner? Their capacity to love.

Of course I am paraphrasing and probably doing a bad job at that. Anyway, it's a good book although it ended way too soon!

Born to Run was a fantastic book! There was a PBS special on PBS that you can find almost all of on youtube called Race for the Soul Western states 100. It was super inspiring.

I am glad I found your blog and was just thinking about how if I ever have any more children how I would keep running during pregnancy.

I love how Anton cuts down his shoes! I always wondered how he could go out on long ass runs and not take water but apparently he was stashing some somewhere.....

i see this is an old post but never mind. i had fun reading it! :D i just started running and am traning for my first 15km. i love reading about female runners who've been doing it for years. i just want to create a mindset that i can keep adding distance to my latest limit until i reach marathon level :D