If that title doesn't keep you away, what will? I keep trying to write a grand summary of what has happened since I stopped blogging on May 20th. It seems the mere fact that I have not been blogging has left me incapable of putting it into words. Oh well. 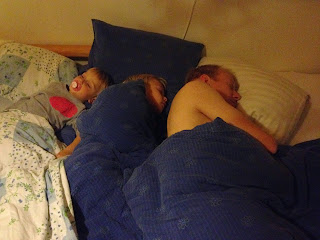 On Wednesday SR returned from Duluth, MN. We have spent the last year living on two different continents. I am also having trouble finding the words to describe how wonderful it is to have him back.

It was kind of a rough summer finishing my PhD alone with the two kids, working another job (to retain my Danish residency), learning my American driver's license wasn't valid in Denmark, getting plantar fasciitits from using the babyjogger for most transportation, etc.

SR had a rough summer living in a hotel and missed us. We're all happy now and discussing our next adventures.

After I finished my PhD we took a trip to Frisco, Colorado. I can't say enough good things about this town and we are thinking of moving there for three months in the spring before our big move to California. We would normally just move right to California, but I have been contacted by a friend who, due to illness in the family, would like to switch residency positions with me. Due to the American residency match rules we are not allowed to find out if this will happen until we have both done 45 days at the program we "matched" to. The real problem is SR doesn't know yet where he should apply for a job. So why not move to Frisco in the mean time? Or Flagstaff, AZ?

SR had a great race. He came in second after Matt Flaherty in the 50k. He loved the trails. I really like mountain running, too. Honestly, my favorite running is with steep uphillls and downhills. I also love training at altitude and I think because I had been in Lake Tahoe over the summer (for the Western States Endurance Conference -- writing for iRunFar here) and taking iron all the while, by the time we got to Frisco, the altitude didn't come as too much of a shock.

My mom, on the other hand, got blue hands the last day we were in Frisco. Had it been the 3rd or 4th day, I would have driven her to Denver. She and my sister have always had problems with altitude and I wonder what genetic condition this is. Had we not gone to the Rockies every year since I was a kid, we would have never known about it.

I think I'm going to ease into writing about running again. I have to admit, I am a bit fatiguée, as they say, of a society that values individual accompishment so much (ie. marathon PR, ironman, straight A's, etc etc). Well, it gets old. Sometimes I would look back at my old blog posts over the summer and wonder who I had become. I have to point out that my favorite runner at the moment, Sylvia Kiberenge, is the most modest person I know.

Anyway, I love running more than ever- especially after a long injury, it is awesome to be back.

Yesterday, in Holte, the last Salomon Trail Tour race (held in Rude Skov) was one of the highlights of the year. It was a 16k of very technical, hilly trails and ended up being one of the most tactical races I have been in. All the females started together and we eventually learned that we had to keep running in a pack (the lead group was a pack of four) because otherwise the woman in the lead would get lost and look back to the others for help. Anyway, we had a blast and the women's race ended with a sprint finish on the track.

SR had fun, but got very lost, so not quite the placement he had hoped for.

Here was a shot of the top 3 women and men from yesterday.

I have a lot more to say, but why not set the bar low for the next post? Of course you have heard these. But if not, why not take a listen?
Posted by sea legs girl at 21:18 6 comments: