As we stood by the baggage carousel once again at Chicago O'Hare, I surveyed what remained in my life: 3 suitcases, two boys, a baby jogger. Rolls (and a little Brie) fom the plane. We were all tired and how would I wheel all of this out the door alone? And why had I said good-bye to my whole life once again?

Just the day before I had run Skodsborg Marathon.

A nice cool day, light breeze, no ice or snow. Here are Henriette and I right before the start. Would you believe my hands were too cold the whole race to turn on my music?? 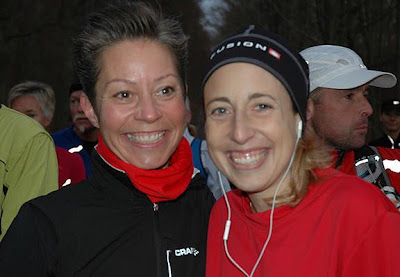 Rasmus let me run since I'd be with the boys for two weeks without him. I ran the hilly trail marathon in a comfortable 3:32 (well, 3:29 when I came through 26.2 miles), taking second overall, first woman and, as far as I can see a female record on that course (!). I felt awesome. I guess for a lot of reasons. It's about running, it's about loving this area of the world, the people, the life that has become my own. Eating a lot at aid stations. 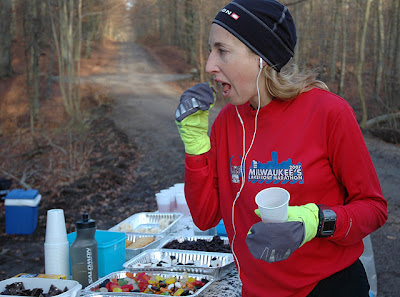 And then there was O'Hare Airport. I was glad to see my mom, but fell asleep on the way home, not knowing what life would bring. But happy I had some Diet A&W Root Beer at my side.

We've had a number of mornings in a row waking up early: 2:30, 1:45, 2:30, etc. then when the child care opens at the YMCA, I am there! And so are lots of other moms. They are thin, maybe a little hungry, maybe in a bad mood because of that. Or perhaps they're lonely and bored. Just like me. What am I doing in Oconomowoc? Maybe I could make some new friends. Maybe I should get my act together and contact my old friends...

SR has two weeks left of his fellowship. Then he will be joining us at our new rented house in La Crosse.

In the meantime it is the kids 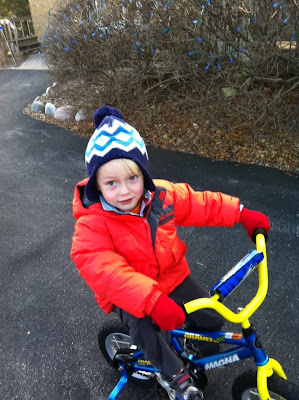 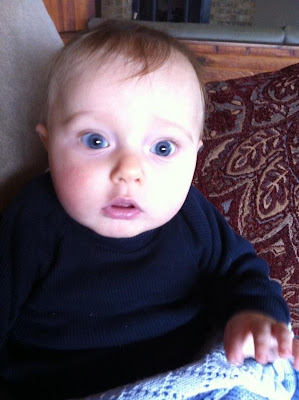 , me, my parents. I need to get adjusted. But even my work is over the computer via VPN to the hospital intranet in Denmark. I look at Danish peoples' eyes from the US. Wild. I'm just so glad it works.

At times like this, I never feel like focusing on getting fast. I just want to lose weight. It's sad but true. I am down to 113 lbs. I was between 118 and 120 just 2 months ago when we were in the US. It's a way to get control, of course. But when the woman at the Y saw me with Mattias and said "you are so skinny and you just had a baby!!??" I should have been happy, but I wasn't. Is my life about being thin and in shape? Or um.

This morning I woke up with the boys and there was snow outside. I was happy, too, because SR had read me a letter from Værn om Synet (Vision Protection) saying my PhD project had been awared 200,000 kroner! (like $40,000, though less now that the Euro is doing so poorly). My mom watched the boys while I went for a snowy trail run, 17.5 miles, watching the sun come up and life was more than okay. I got home and told my mom I was going to make a lot of food for Christmas this year for us and the relatives from California: æbelskiver, rød kål, sild, ris à l'amande. I can't just forget that life in Denmark (I just hope this does result in less work for my mom and not just weird, bad food. Anyone who really knows me knows I am not joking.).

And some running music:

Danish of course:
Church of the Real by I've Got You on Tape
Finnish with a Danish record company:
Ode to the Bouncer by Studio Killers

Estoy de vuelta! I'm late wishing you all "bon hiver" since our first snow was a couple weeks ago, but who knows what it is like in your part of the world.

All is well here. And in just 4 days we're moving back to the US for nearly 8 months. So I figured I had better post some pictures before I don't have access to them anymore! Plus I got SR to babysit (this is the time I normally go to Spanish) while I blog. I never thought it would come to this, but with two kids, if one doesn't need something the other one does. And it wasn't doing a lot for my psyche to ignore them while writing a blog post.

I've missed a lot of you readers. Granted, I've heard from some of you via email and followed some of your lives on Facebook.

Just in case you were wondering, I have not been exercising less. It turns out Mattias loves the babyjogger and he loves going to exercise classes at our gym.

He also kind of likes sitting there in the kitchen while I cook. 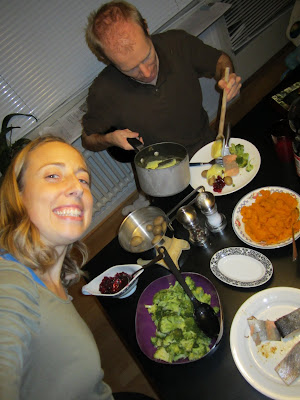 And some sadly pastel Christmas cookies that The Lorax chooses to cover up with his piece of cinnamon roll. 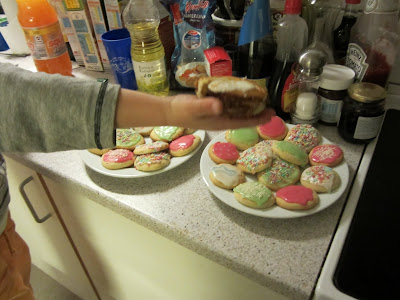 Go figure, he also likes playing (not sure why this is sideways). 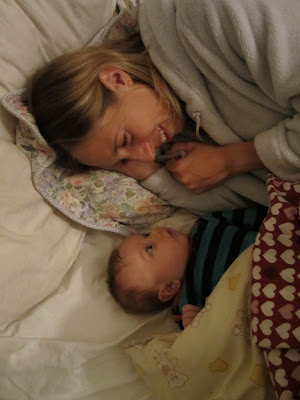 But Mattias HATES it when I sit down at the computer. This is his trigger to start crying. So every minute he is sleeping, I am working on my PhD project. And finally, I'm caught up!

As for running, I might as well not keep it a secret any longer: my new goal is to run the 100km Copenhagen Ultra in April (when back for work) in less than 9:30. If I do this, I can be an alternate on the Danish national team. And, if I switch my citizenship, I may be able to run the world 100k championships. Lots of if's here. I feel the need to mention that our big training race for this will be 3 days of Syllamo in the Ozark Moutains (150k over 3 days). And that will be a lot more fun than the flat 100k.

SR says that my setting ultra goals is an excuse to not get fast. The thing is, I am now certain I've never been faster. I just couldn't prove it until today.

We had run three races that were just odd. But two of them, I took second in overall!!

1. A cannonball marathon outside of Næstved up and down a hill, which I just ran as a training run. I ran it comfortably in 3:34 with a negative split, feeling I could maybe run it again. 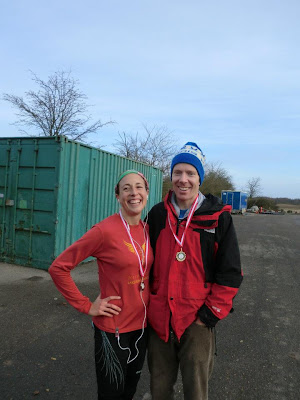 I always forget to wear something to cover those nips. Oh well (that's yet another thing Mattias likes). SR had been going for a half marathon PR that day - on a tough route. He ended up with a time just over 1:16 - one should menion he got lost because he ran faster than the leadout bike. Thanks, Lasse, for the picture.

2. A half marathon on sand and seaweed (and road) (Falster Jagtmarathon). I had never thought of seaweed as a running surface but Jørgen showed us all differently. In fact, it felt like perhaps the most authentic Danish experience I have had. 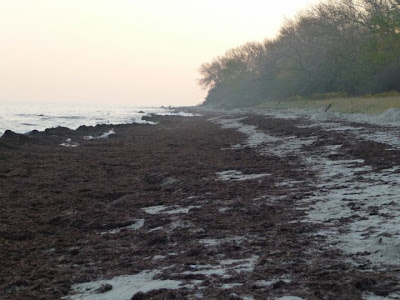 I ran the first and last 5k in 21 minutes, but the beach in the middle really got to me and I took a wrong turn at the end. Final time 1:40:07. This, somehow, got me second overall.

SR ran with the babyjogger, though took an alternate, non-weedy route. 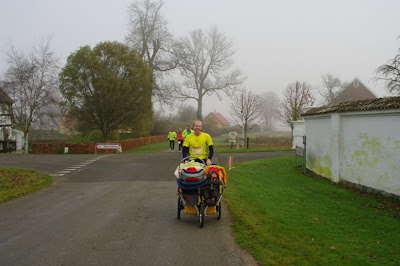 3. A babyjogger mud 10k (Herlufsholm Serieløb). So I had no idea it would get so warm that the race would turn into a mud bath, but it did. I got stuck in mud going on an extreme uphill so that I needed to carry the babyjogger out, all the while slipping all over the place with Mattias in it and then the side wheel got stuck in the mud and fell off. But all of the while there were women fast and furiously trying to catch up with me so I had to sprint the runnable sections. 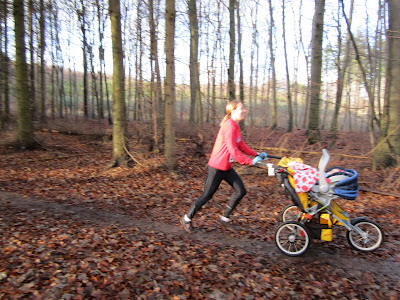 His blanket of course was blown off at some point, too. Final time was 51 something. Nothing to write home about but my entire body hurt like never before after that race. I was strangely proud and the good people of our town learned how entirely nuts I am. And I took second for the women!

Here a picture from the home stretch of the race. 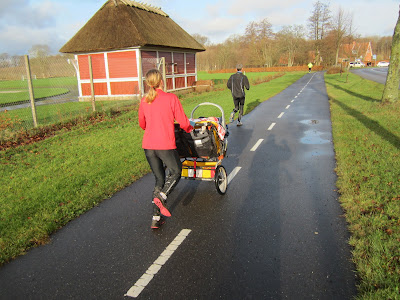 You probably think you see my underwear there through my pants, but it's just my really white cheeks ;). And that track just to the left is where I run all of my intervals, just so you know.

So, SR was sick of me "frittering away (as Piccola Pinecone says) my speed" on these types of races. He was totally convinced that my every other day three hour runs on rest days were ruining my training. So, I got so fed up that today (after of course a 3 hour run yesterday) I suddenly decided to run a 5k on the treadmill. I had no particular plan as I'm still not used to km/hr so I just ran hard. Ha. And I ended up running a 5k PR! 19:33. (you may remember I had a previous PR of 19:20, but that was from a relay where the time was miscalculated (too fast) and I never corrected it). I just wish I had a race I could run to prove to the world that I am fast. But instead, I will work on"frittering away" my speed on Sunday, running a hilly trail marathon. And it will be great!

Lately I have been listening to Coffee Break Spanish when I run (have gotten through over 30 hours of lessons!), but today during my 5k I listened to "Vi to" by Medina. And that Maroon 5 song "Moves Like Jagger" is such a good song to run to provided you sing out loud and change the lyrics to "I've got to move my jacket!" Much funnier that way.

And if you want a song to simply curl up to in your warm house, appreciating your loved ones "Calgary" by Bon Iver (yeah "Bon hiver"), may be the way to go.