Okay, I thought I would not be able to SURVIVE through last week. Life could not have been busier. But thank God for the weekend and two amazingly fun runs.

We had our first sponsored run on Saturday. SR and I were part of a 4 person relay team sponsored by the company Damgaard Teknik. Their vice president actually contacted me through Facebook. He happens to have the same first name as SR and also ran on our team.

SR was our first runner (probably not the best idea) and came through with a nice 16:30 5k. 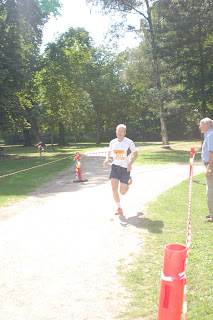 Next came, as I call him, Jul Tre, or the VP of Damgaard Teknik. He ran in just under 19 minutes 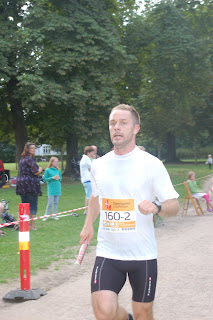 and handed off to me. Mind you I wasn't expecting much since I had only slept 4 hours the night before and about the same all the other nights that week. BUT, this was the first 5k I had ever run on an empty stomach. I have said many times to SR that my biggest limiting factor when I run shorter races (ie less than a marathon) is stomach pain. Well, I should always give myself a few hours without eating before races, because I shaved 25 seconds off my previous 5k PR and handed off the baton with a time of 19:20(!!!). 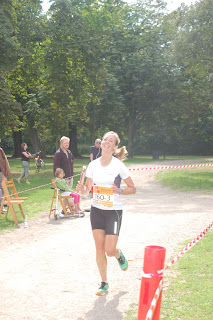 Our final runner is a good friend from our Atletik club and was unfortunately passed at the last minute by the female from another mix team, but we were happy with our second place.

A good time was had by all. 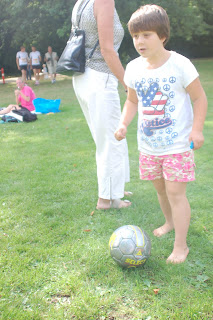 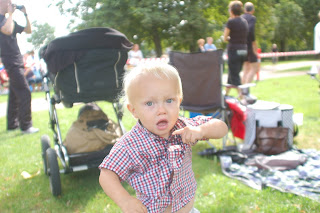 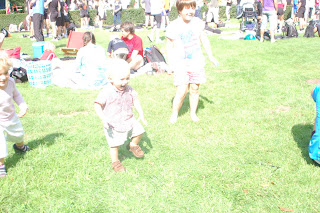 The next day, SR and I ran the most picturesque race we have run. It was in forest, formerly undiscovered by us, just 15 minutes from our home.

We drove down a long road into a dark, midieval forest, to see many runners gathering in a valley around a villa from the 1800's. It is called Villa Galina (as was the race) and was built as a hotel and restaurant for horse and buggy travelers between Copenhagen and Næstved.

It was the first race I had run that wasn't advertised on a website. It was all word of mouth. And there must have been nearly 200 participants. The 14 k race was on hilly trails in the forest, skirting some sparkling ponds. The weather was perfect. And what a great day to forget our camera!

SR won the men's race and I took second in the women's.

Since I don't have any pictures of the second race, here's a picture of The Lorax aka Billy Ray and Step Daughter trying on their clothing for our Danish wedding on Saturday. 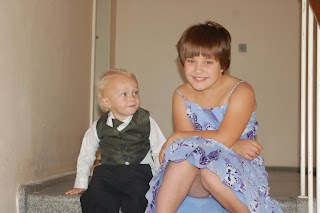 Running Song of The Day: You Only Believe Me When I'm Lying by Zoe Muth and the Lost High Rollers
Posted by sea legs girl at 17:07 2 comments:

German retro or just a mullet? 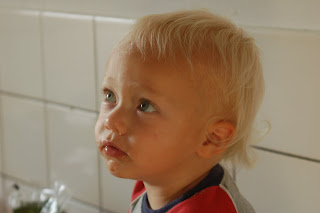 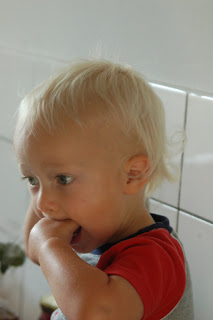 I had an attack of submania on Wednesday which started with waking up at 4, working on the PhD project and then going on the fastest morning run I've ever had in the gorgeous rising sun. I proceeded to go to work and offer to take all of the Christmas call shifts which no one wanted (??!!luckily SR was cool with this) and then removed some microscopic stitches with my naked eye that the others in the department couldn't remove with a microscope. Yes, I felt like a superhuman. The day culminated in the above haircut, which SR and I created together.

I feel less than super and barely human today due to fatigue, but we're looking forward to the relay run at 2pm.

Step-daughter update: she continues to say she is really happy here and, hey, she's lost 3 lbs! She looks awesome.

I wish this post were about a running race.

But it's about a husband and a wife who have gotten in a bit over their heads with work, research, running and parenting. 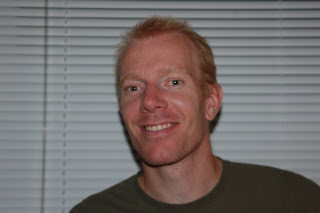 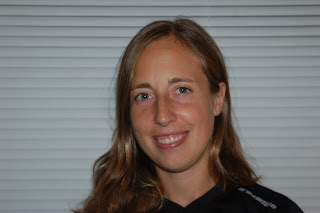 Above are photos for our TransAlpine Run passes. The run starts September 5th. Unfortunately, we haven't had much time to train for it.

Instead we've been trying to plan this huge party/Danish wedding we're having in two weeks. And my job has gotten crazy with the planning of my PhD project and working full time in my regular job. Plus SR's job has not become less stressful and he continues, understandably, to be quite affected by every "you're dying" conversation he has with his patients and their families.

Sometimes I wish we could just relax with a duck and a good book. 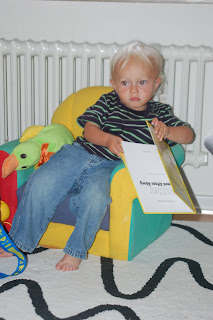 There have been some highlights in the past week, though.


-SR and I got in some practicing with him pushing my butt as I run uphill. This is one of our tactics for the TransAlpine race. We have no mountains here, but make do with these steep but small hills around here called Åse. (I also love running with my new Gregory Wasatch backpack and I'm looking forward to using it at the TransAlpine Run 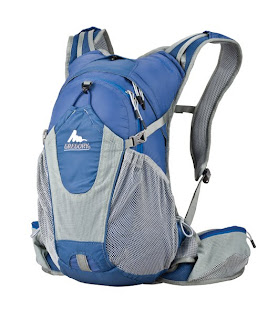 
-We were invited to participate in a 5k relay by a friend who's company is going to sponsor us!!! In the race, all 4 participants run 5k. Not only is the race paid for, but we get clothing, too. Our first sponsor. That race is next weekend. The great thing about a relay, of course, is we don't need a babysitter.


Running Songs of The Day:

The Flaming Lips - Race For The Prize (Sacrifice Of The New Scientists)
The following song has pretty lame lyrics, but I love running to it: French Navy by Camera Obscura
Posted by sea legs girl at 09:09 8 comments:

I suddenly have a daughter 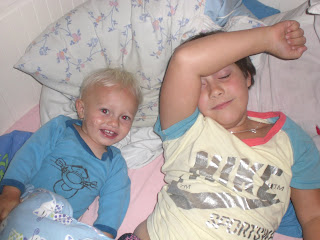 Ever wonder how to start being a full time parent of an eight year old girl? Two weeks ago step-daughter moved in to live with SR, The Lorax and me in Næstved. I was more than a little nervous about it. What do I (or SR for that matter) know about allowances, house rules, chores, etc? Add to that the fact that step-daughter loves a meat and potatoes diet and I have been a vegetarian for my entire adult life and don't have a clue how to prepare meat. Plus, her moving in corresponded with me starting a new full time job in Ophthalmlogy.

But what did step-daughter think? There were a million things going on subconsciously in her mind, but what she talked about was wanting frequent fast food, dessert with every meal, full access to the Disney Channel and not being forced to ride a bike.

I remember what it was like to be a kid. I would have been devastated if someone had taken away my Nintendo, Reading Rainbow or desserts!!

The thing is, SR and I just weren't going to put up with nights sitting around the tv eating fast food. We are too interested in the outdoors, exercise and staying healthy to live a life like that.

How could this work? One important thing SR has taught me is as long as kids have routines and attention, they are happy. As it turns out, we could decide the daily routine and still make step-daughter happy.

Here's how it's worked:

First we taught her to ride her bike. It involved a small amount of money. But now she loves it and she can ride to school and back and also ride along side of us while we run. Dare I say she is proud of how good she has gotten?

Here she is with SR after a muddy ride. 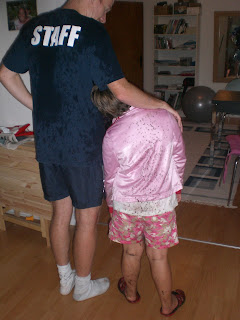 We have also played tennis with her a bunch of times and now she is good enough to start playing along. The Lorax takes pride in being the ball boy and also swings the racket a bit.


Yesterday we went to the pool and I taught her the crawl. She was an amazingly fast learner and is already better than a lot of adults. She can even put her head under and breath correctly. Now she can do laps next to me at the pool. I'm excited to see how quickly she will progress.

Arranging a healthy eating plan has not been as easy. We said no candy or desserts except for on the weekend. And we make three healthy meals a day. This has worked remarkably well as far as SR and me losing weight, but we're not so sure it's working yet for step-daughter. I knew we had a set back when I found a garbage can half full of peanut butter cup wrappers that had been smuggled in from the US. 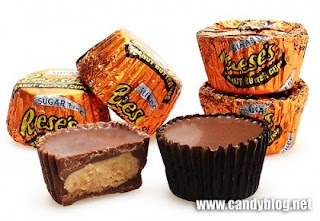 What kind of rules do you use with your kids in regards to eating? I'm certainly open to suggestions.

Here is a poem she just wrote:


But the best part of having step-daughter here is no doubt how close we've become. Some of our best moments were taking walks in the woods, playing Matador (Danish Monopoly) or sitting in the sauna and talking about how gross boys are. 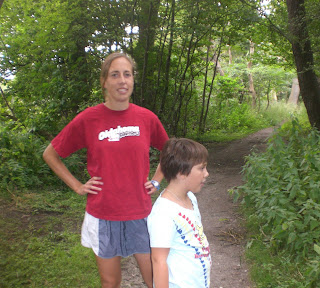 Last night she made some comment about not wanting to visit the United States unless it was with me. She is the type of girl who knows the right thing to say, but I think she meant it. We have both changed a lot, but perhaps me the most. She is no longer afraid of me deserting her and I am no longer afraid of really loving her.

Running Song of the Day:

The Way I Are by Timberland
Posted by sea legs girl at 15:50 6 comments: