Yesterday's 6 hour run was definitely one for the books. Not just the race itself, but the entire experience of travelling from Næstved to Grenaa, staying at a lovely home in Sangstrup and being part of the Grenaa 6 hour weekend. Honestly, had it not been this particular 6 hour race and the timing of it, I may have never run a 6 hour race again. I had this voice in my head that said I could never again run on such an unvaried surface for so long without getting problems with my hip. This was my chance to tackle my fear with a new running technique and new training plan.

The start was really interesting. Almost immediately I noticed I had forgotten to change my Garmin from miles to kilometers and staying on pace for running 70k was going to be a constant challenge of my math skills.

Shortly after that, a woman passed me. I entertained the notion of holding on to her, but she was going 6:30 min/mile pace. I did not recognize her and I doubted a woman out here could run 80 km in 6 hours, so I figured it was smartest to let her go.

Just before the marathon, I passed her and felt very good in my skin.

There were really no lows yesterday. I just enjoyed running. The joy of constantly lapping people doesn't get old. I had also forgotten that about 80% of the course is on forest trails and only 20% on asphalt, so really an ideal surface for someone like me to run a 6 hour race on. Not to mention all of the people cheering at the aid station and really all along the course. This is a big advantage of a compact route.

It was, to be exact, a 3.13 km loop, which had two really sharp turns that really irritated my right hip. And that hip was killing me between miles 10 and 20, but I had also experienced this at Superior and Glacial Trail and it went away. The same thing happened yesterday. The more I live with my dysfunctional hip, the more I realize, the femoral head is simply not attached to the acetabulum correctly. It probably never will be. As I run, the problem gets worse, but then my muscles tighten and get inflamed and the actual hip pain goes away. And, in all honestly, the length and severity of the problem keeps becoming less, so maybe it will actually go away.

I did run with a back pack, despite an aid station every 3 km. I am the picture of someone who should develop hyponatremia. I drank constantly. But I was also constantly thirsty. I have to say, I think I know my body's signals well enough and the principals of exercise-associated hyponatremia that I know how to avoid it.

Ok, but what was 70k?? I kept saying to myself it was 43 miles, but it's actually 43.5 miles! (this is where Garmins in the right units come in handy. Or the ability to do math in your head while running an ultra. It alwasy seems so easy to do this math once I am done!).

Then, with a half an hour to go, things took an unexpected twist. "You're in second" said the race director Ove. "What?!" I told him I thought I was in first. All day, people kept saying I was in first and suddenly I get this information!? On my next and final trip through the aid station, I learned that she was slowing down and "5 minutes ahead". What was the chance I could make up 5 minutes in 15 minutes?! I held onto the hope she was walking and SPRINTED the last 15 minutes, like my life depended on it. I passed woman after woman, but what did she look like? I had passed the woman who started ahead of me... (I thought!).

The horn blew. The six hours were up. I did not know if I was in first or second or how much I had run. My Garmin said 43.03 miles and I thought that was 70 km. Whatever happened I was satisfied! It was actually fun! I could not walk off of the course to save my life, but it WAS fun.

I know this is going to be confusing since I said my Garmin was in miles, but Endomondo automatically reads in kilometers, so above was the final reading.

How I managed to run almost an extra kilometer that was not part of the course, I am not sure, but next time I should not run off into the woods with the first guy I meet named Svendrik. This will be my number one strategy for improvement next year.

Below are the laps times for myself and the first woman, Gitte Sørensen, who ran over 4km longer than she ran at Grenaa last year, so that is awesome! 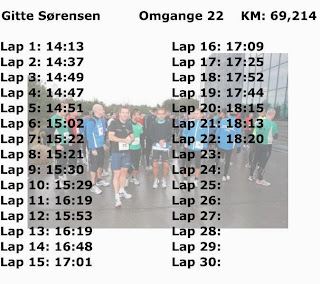 Edit - Ok, this post would not be complete without a shot of this guy, Poul Petersern (sponsored by Asics), who won for the men, running 79.1 km (6 km ahead of the 2nd place Krisitan Birk). This shot, again by Ib Stokkebye, captures his essence. Notice how he calmly yet totally effectively has just tossed his cup into the trash WHILE both feet are off the ground and no pot belly. Throwing away a plastic cup - like a boss. :-) (honestly, it was fun to watch him run; he is good). 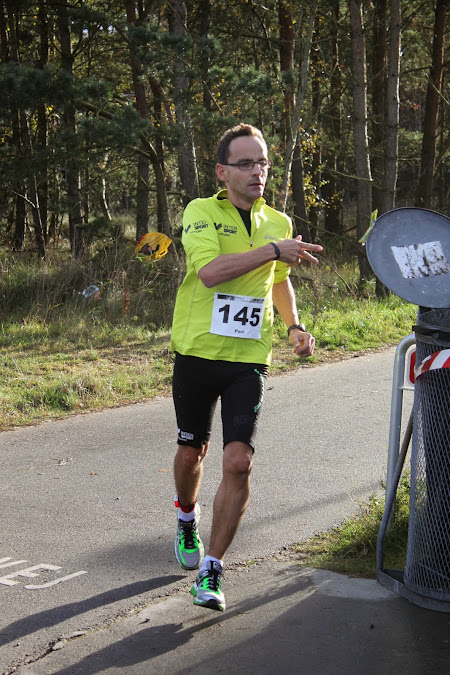 1. I am now going to speak with a Jutland accent all of the time because it is much easier and people can almost not hear I am an American import.

2. When I got home I read the standard for getting on the Danish 100k national team was 70km in six hours. Bøøøøø. So close! But until Denmark allows double citizenship, it doesn't affect me. I just think... wouldn't it be better to have MORE women to choose from on the team so that every time Denmark goes to worlds they have more than 2 or 3 going?! There should ALWAYS be a full team and if there are women on the edge who are fresh and ready to go, they will do better than an injured woman who has previously met the standards and is only luke-warm about going. Just my thoughts. Bring back the alternates!

3. The way into the heart of a Dane is through running. This study was no surprise to me to read (http://loeberne.dk/studerende-laver-faellestraening-til-halvmarathon/) that a country with one of the worst reputations in the world for accepting foreigners, is much more open to foreigners who run races (competere: striving together). Perhaps that helps explain why this clumsy American bookworm has been disguising herself as an athlete :-). Well, no regrets. I am having the time of my life and have never felt so at home in Denmark or so in shape.

It's been a fantastic 3 weeks filled with work, running, time with friends, lectures, but my family is in the US (!) and Tuesday I head back to the states. January, we'll all be back.

I have SO many songs to recommend. Where to begin? Well, I took a 30k bike ride today, windless, sunny, in the 50's

and listened to - on repeat- too many times to admit--

"Ways to Go" by Grouplove. Nothing more than a kick-ass love song.

And I want to say thank you to all of the friends and family members out cheering in Grenaa, Ove Kvist and the many volunteers for a fantastic race, my coach Ole for a training plan that is working, makes me energetic and happy and to Team Salomon Denmark for always supporting me, even off the trails (I LOVE that vest!).

So Svendrik is available again? Excellent, thanks.

Congratulations on such a successful race! Getting through that hip pain must be a big relief. Maybe there is another Bandera in your future...?

Alicia, I think Svendrik is looking forward to seeing you at a race in Denmark soon.

Bandera, and lots of practice on moving rocks. Wish I were yelling your splits/placing for you.

Olga- I wish you would have been there, too! I needed a beautiful Russian on my side for sure. Are you trying to entice me with Bandera, by the way? I would ask if you are running, but I think I know the answer. I would love to come just to see you, but we'll actually be in Denmark then. Would have liked to attempt a better performance than last year!

Is your family going to be able to join you in Denmark/do you know where you'll be leaving "permanently?" You seem to love Denmark so much - I'm sure it's a tough decision no matter how you decide. I'd love to hear more of your thoughts about living, working, and running in two countries.

Best to you,
Kate

Kate, our living and working situation is not ideal right now - and if Denmark allowed dual citizenship our problems would be behind us. I am not here because I am running away from my family in any way, but ensuring our whole family has the right to live in Denmark when we chose. I am the only one in the family without Danish citizenship so there are very strict rules that need to be followed. I miss them incredibly. They WILL all be coming back to Denmark with me in January, thank God! If you have an hour (or five) and a private email address I could discuss this topic ad nauseum. Thanks for caring!

Yes, was trying to entice...would even meet, drive (from Austin) and shelter and crew:) but oh, well, next time. And yes, your answer is correct - for now and for Bandera anyway. Lets pick something else I could help you out at!

I can't speak for Kate, but I too would be really interested in hearing about your experience with two countries/trying to get dual citizenship, especially as I consider options for my own future. If it would be possible to e-mail you sometime, I'd love to hear your (pretty unique) perspective. Also, congratulations on a successful race! - Liz

Olga, stay tuned; just found out Bandera may be a poosibility... All depends on when my interview at Stanford is :-).

Liz, I would love to write with you. sealegsgirlblog@gmail.com

I avoid specific details on this blog for lots of reasons, but I should probably write something about it here sometime!