"That kid will run before he walks"

That was a joke people liked to make when they saw me running races pregnant. I laughed and didn't think much of it.

But then The Lorax turned 14 months and he still wasn't walking. Again, I didn't think much of it. But then people (i.e. impromptu pediatricians) started inquiring: "He's 14 months and he still isn't walking???" I'm not sure what they were worried about. I mean was he going to turn into a 30 year old man who crawled down the street to the store? (If that were the case, I imagine he would still shake his booty in the exaggerated way he does now just to get a laugh.)

Then last night I was sitting at the computer trying to find Kara Goucher's training plan and the sheet music for "Night After Night" by The Sounds, when what to my wondering eyes should appear but The Bois, rising on his own (as he'd never done before), walking across the kitchen floor, over a power cord and a big wodden slat in the doorway, turning a corner and running down the hall to find SR in the distant bathroom.

Some (kinder) people had suggested "Why would he walk when he's such a fast crawler?" Well, I guess he's finally found something faster.

I was reminded of the lengend of my dad. As the story goes, my dad was a good 16 months and still hadn't walked a step. He then, in front of many guests, stepped out of a closet with hangers in his hand, and walked across the floor whistling a little ditty. I'm not so sure how true the whistling part is.

The point is, babies and kids have their own schedule and the way they develop is so fascinatingly varried. I mean, certainly my dad's late walking didn't signal any sort of cognitive delay. He famously told his mom when he turned 4 that he was ready to start school, so he started kindergarten a whole year early. He's now perhaps Wisconsin's best medical malpractice lawyer and a fantastic acordian player to boot.

Well, I'd love to hear all of your baby development stories and folklore. 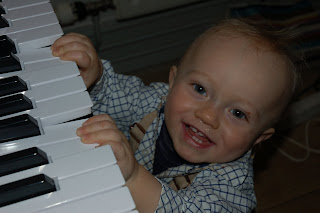 I could play guitar and rope a steer before I learned to stand.

If you can name the song those lyrics are from, you've impressed me and named the running song of the day.
Posted by sea legs girl at 14:05

"Papa Was a Rodeo" by the Magnetic Fields!!

I was a very late talker. My sister always did the talking for me! However, I somehow fixed my neighbor's VCR when I was about 6. Babies definitely all have their own timelines. I can't wait to meet your Lorax this summer!

You're completely right! 14 months is nothing to worry about. It's as if there is something wrong when at 1 year they aren't walking on their birthday. My daughter just barely started walking last week and she's one month younger than the Bois.

My daughter took her first steps at age 15 mos. Didn't start *really* walking consistently until 17 mos., though. I never worried about it and was frankly glad to have her (semi-) contained a little longer! Now she's off to the races - each at their own pace of development, like you said.

You'd know better than I, but I've also heard there are studies showing that kids who walk before they ever crawl have more trouble reading? Or start to read later? Or something like that. Not sure why that would be related, but some pediatricians around her encourage people to get their kids crawling before they walk.

SLG-
I have a question for you and can't figure out how to email you. Will you email me so I can get your address, please? joyschneiter@hotmail.com

Emily,
Right you are with the song! But I actually prefer the Conor Oberst cover to run to. The Lorax is quite excited about meeting you, too.

Abbie, so cool that your daughter is walking. It is just so cute to see, isn't it?

Kate, I have also read it *can* be a sign something is a bit off if kids walk before they crawl. And I believe the studies. But that doesn't mean that walking first is always a bad sign. Also, I don't believe that forcing a kid to crawl when they want to walk first will in any way improve neurocognitive development. That just sounds backwards to me.

JoyJoy, I sent you an email.

It's been said that my first sentence was, "That's not funny." A critic from the start, I guess.

I have two brothers who, instead of crawling, did a backward crabwalk.

The one landmark I've found with an interesting neurological background is that children ALWAYS point before they speak.

My daughter asked me one night (this was before she was talking so she sort of pointed and made noises) if she could pee pee on the potty. And so I put her on and she did, easy as that.

She was barely 17 months old.

OTOH, she did really start talking till she was well past two. And now she never stops.

My son, who is now almost 5.5 didn't walk until he was just about 17 months old when he stood up and walked pretty much perfectly. I like to think he wanted to wait until he knew he could do it well.

He talked very early (14-16 months... full sentences) and could recognize and say all his numbers before he could even walk. It was actually kind of freaky! He also knew and could identify the 50 states by age two... again, freaky.

Needless to say, he's still a smart kid. He has definitely been on the slower end of the spectrum with gross motor skills but he's a great swimmer and has been walking just fine for years. ;) I don't think you have anything to worry about.