Yesterday SR and I ran a half marathon in Copenhagen. It would be our last fast race of the summer (we've got a triathon, Voyageur 50 mile and The Transalpine run to get ready for).

I was excited to see how much running Yasso 800s would help my half marathon time.

Here is a little about the race:

Title: Ørestadsløbet 5k, 10k and 1/2 marathon
Start Time: 14:00
Participants: we heard about 600 in the 1/2 marathon
Route: Not much elevation change, but windy. Half on dirt-rock trails, half on asphalt. 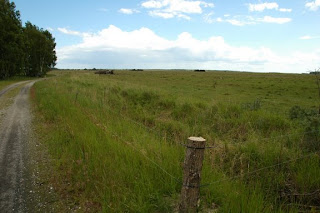 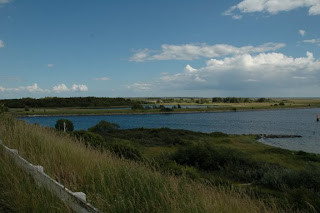 It was pretty scenic for being right next to downtown Copenhagen. Thanks, Robert, for the pictures.

I wore a garmin and was going for 4:15 min/km or about 6:46 min/mile speed. It’s an old garmin, so I thought I was going much slower than I was because it lost satellite signal often in the little patches of woods. So, even with the garmin, I started out too fast.

At around 10k, I got passed by a woman for the number two spot. I have heard quite a bit about Jannie Hansen, so I really didn’t mind getting passed by her. But I did start swearing at her in French in my head at that moment. This is a little thing I do to encourage myself, but probably isn't something I should write on a public blog.

The second half was really rough and I was regretting the decision to wear racing flats. And I was so mad there was no sports drink! I have to say it is actually dangerous to not have sports drink (and just have water) on a hot day. But other than that, it was an amazingly well-organized event.

Anyway, I was so tired and hungry by the end that I might have given up had it not been for a backwind and "Friday I'm in Love" by The Cure on repeat.

But I was in pain and looked like I was stepping on hot coals at the end. 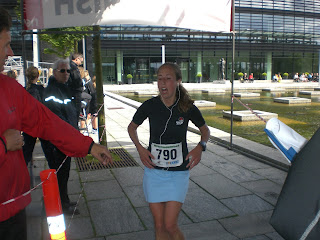 And then stabbed myself with a safety pin. 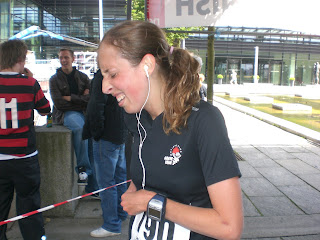 I'm just kidding about the safety pin. I'm not sure why I looked so tortured here. 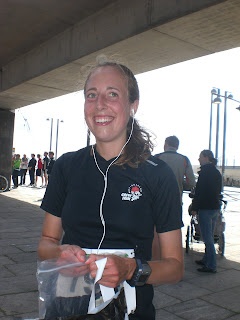 I talked to the second place Jannie after the race and was pleasantly surprised by how friendly and fun she was. It was her trackclub, Amager Atletik, that hosted the race.

And many members of our Herlufsholm trackclub were there to celebrate with afterwards. I am impressed by how most runners at these events come to represent their local club.

SR was the winner for the men with a time of around 1:16. He won some 1100 kroner shoes that didn't fit. He is looking forward to exchanging them at Kaiser Sport for some expensive sports item/s.

I was such a proud wife. 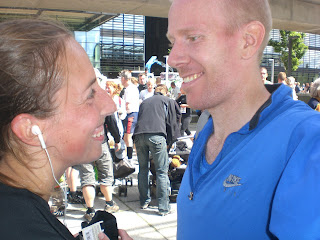 B guess I'm a little disappointed I didn't come close to getting under 1:30. I am not sure what to do differently. I had tapered and gotten some speed work in. My weight is a steady 51kg. Perhaps it's my diet. My 5k and 10k times tell me I have it in me to run longer races faster, I just have to figure out how.

Running Song of The Day: obviously Friday I'm in Love by The Cure
Posted by sea legs girl at 15:05

Nice job though sorry you're disappointed and your feet were unhappy. A PR is always great! And good job to SR.

congratulations on the PR. I'm kinda the opposite. I can race the longer stuff fast, but I can't come close to matching what the predictions say I should be able to do for the short stuff.

Hey, that course looks just like the Voyageur 50 course.