Three Days of Syllamo 2012, now with a few pictures

I could say these past three days have been like a dream, but I have never had close to this much fun in a dream. 95 miles in 3 days in running shoes with marked trails and aid stations. This may just be the best way to discover a new area of the world. And the Ozarks are gorgeous.
After a race like this, It feels almost wrong mentioning placement since this mattered so little compared to the whole experience, but you guys might be curious (like I am when I read other blogs)
But first, I was wrong about the elevation change. It was. 26,000 ft over the 95 miles. I forgot you don't add the ups and downs since it is a measure of net change. Sorry!
Friday 50 km: 5:22
Sat 50 miles (80 km): 10:20
Sunday 14 miles: 2:30
Total:18:12
Second place female after Ashley Nordell, who someone like me does not mind losing to. And this is technical, hilly running. I love uphills, but boulders, slick rocks and cliffs are not my forte. Ashley is good at all of it.
SR ran the 50k and the 14 miler in 4:13 and 1:52. He won both.
Congrats to Nick Lewis, who won for the men, Darrin Schneidewind took second. Ashley Nordell was third overall (and yes, Piccola Pinecone, winning outright means winning overall - also for the men :) . Have you had a baby yet??).
This race far exceeded both of our expectations. It was low-key. These people were there because they love running on trails. Meghan Hicks, Rob Wehner, Paul Schoenlaub, Mindy Coolman, I'm talking about you - thanks for entertaining me on the trails and at dinner.
This trip was made so much better because I realized what a huge gift this was from my parents that a couple with two kids could run this. And over and over on the trails I told myself not to waste this chance. And it worked. I really enjoyed it and forgot about stress. Ha and weight. Wow you need a lot of calories to run fast that far. Everything just clicked this weekend, as they say.
No music all race except for the bluegrass band at dinner. Did ya'll know the city of Mountain View, just below the race start and where we stayed, was founded by musicians who came down the mountain to meet with other musicians and play? And they have a store dedicated to dulcimers.

Here are the first few pictures from my mom's iPhone.

This was after the fifty km. I arrived an hour earlier than we had expected so I had already gone down and waded in the ice cold river by the time my family arrived. That's why I have no socks on. I am sold on the ice cold bathing, though it really hurts the feet. It was the first time I tried it and it seemed to work wonders. 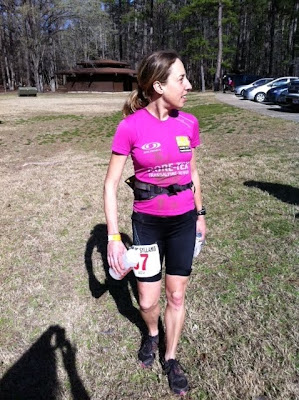 Mattias is waiting for me to finish the fifty miler. Boy was he happy when I arrived. And I finished about 20 minutes earlier than I expected because a gal named Mindy Coolman came out of nowhere and blew by me with about 6 miles to go, running fast. She is a nutrionist and I wonder if that has something to do with the fact she finished super strong in the fifty miler. I went beyond what my body could handle and stayed with her until there very end, where she pulled ahead. 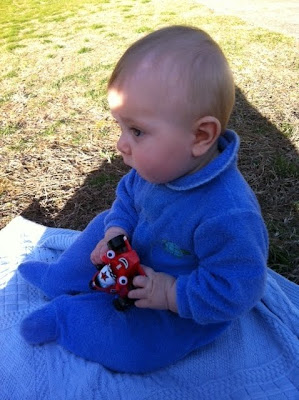 Here is the fifty mile finish and I am freezing! I kept saying "wow! It got cold" and my family gave me weird looks. I breast fed Mattias and soaked my leg, drank a diet root beer. 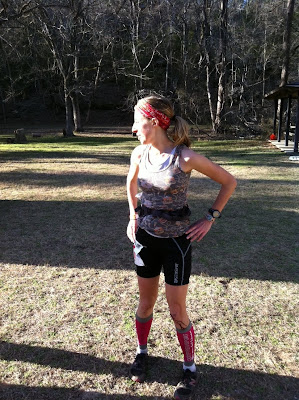 When we arrived at our cabin, I headed straight to the shower because I was so cold and when the hot water hit me the world went white and I fell over, never completely losing consciousness. I yelled for SR to bring me water. Either it was dehydration or heart failure, I thought. "Take me to the ER I yelled!", worried these were my last seconds on earth if we didn't act fast. After I lay down and drank a half a glass of water, I felt a little better. I just kept drinking - all sorts of beverages until I could stand up and then until I could urinate and then I knew I was ok- and ready to run, or at least attempt to, the next day.

I will just add, I had had 14 s caps and drank constantly, but felt nauseated the last 6 miles, trying to keep up with Mindy and got behind on drinking. Just goes to show how careful you have to be in these sorts of races with hydration, especially when it was warm. The reason, of course, I fainted in the shower is I vasodilated when the warm water hit me and there was not enough blood going to my brain. Maybe some people reading this are wondering if that is always the case with me ;).
Posted by sea legs girl at 20:08

happy you had such a great time (and weird to read this as I, as I am in my 8th month, have been barely able to walk, let alone run, for the past week... terrorised this is going to be me for the next 3-4 weeks...).

Nice! Did you wear a 15 pound pack like Meghan did?

Danni, how did I forget to mention I was wearing a 30lb pack? (yeah, right!)

Mapp, that is terrible you are having trouble walking! Where is the pain? Hope you are finding ways torelax yourself and be happy. Easy for me to say, but remember it is only temporary! You will be running again soon and feeling light AND have a beautiful new daughter!

Nice discoverings! And the times are awesome too, both of you:)

Nice job!! I love the camaraderie of trail running. Whether you run fast or slow, you're still just as awesome. The three day race sounds like a fun running summer camp. :)

Awesome SLG, sounds like a prefect SLG weekend. Your repeated comments to PPC are cracking me up) :)

That sounds like a blissful escape from everyday life. Congrats on the fabulous times!

Yay, I was wondering all weekend how it was going for you! It looks like a great place to run. And having seen how fast you went, I have been forced to revise my Chippewa time gap estimate to 27 minutes:(

I'm expecting a report from SR where he downplays his wins, saying he was racing against guys running 50 miles the day between his two runs (and I'm waiting to hear if PPC had two girls, a boy, a monkey and a crocodile, as La Cocotte predicted). It sounds like you had similar elevation-based dehydration to what I had at Leadville; breastfeeding might have put you over the edge.

What do you think of Polyphonic Spree's latest, "What Would You Do?" I'm having mixed feelings.

Great times. Congrats to you and to SR!
Glad you had a great time. I love the Ozarks. Although I've only ever done leisurely float trips and relaxed hikes down there, I can imagine that running trails there would be fun.

Nice! Next year? It's on my calendar...! Hope the recovery is going well. Ice baths are the business.

I love this blog because i learn answers to things like "why do i always feel faint when i take a shower after a long day of swimming/biking/running or a long night of drinking?" :)

does this have any connection with why i seem to always get thirsty in a hot shower?

Congrats on your run! :)