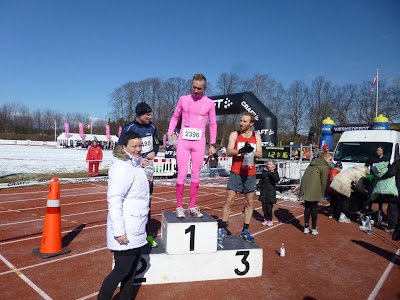 But first, seeing Kenneth Munk in this outfit was not the painful part. Doesn't look the like woman handing out the awards was in pain either.

So dang it all. I arrived this morning feeling I had golden legs. What could go wrong? Nice weather - right around freezing (32F), light wind. It was a PR kind of day. PR kind of course.

The first 3km went exactly as planned despite the headwind - a 3:50min/km pace. Just rolling along, feeling good. Then a bike pulled out in front of me and the guy pushed me over and said "I'm gonna get you Sea Legs Girl".

Alright, I'm just kidding. What really happened is a pacing bike pulled out beside me after a guy said to him "here's the first female". All fine and and well. Rolling along.


Then I had a stabbing pain in my stomach on the right side. If you have ever played soccer as a child and went out really hard running right after drinking a huge cup of orange drink- THIS is what it felt like. I kept praying it would go away but it didn't. In fact it spread to my entire stomach. I had tears in my eyes and was making noises like a horse giving birth. The guy on the bike kept looking at me. Despite my pain I had to laugh on the inside. Was he looking at me because of my neighing and winniing or because I was slowing down. Anyway, I was so embarrassed. Tons of men kept passing me. Where were the women?

I was 1 micrometer from dropping when I told myself to get behind a guy and take some deep breaths and calm down. The pain didn't go away, but I was able to run and felt at least I could finish. 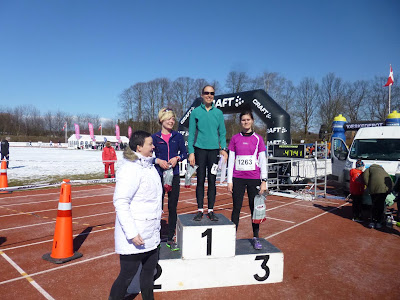 Finish I did in 41:15. First female but probably THE most disappointed runner there today. The conditions were perfect and something still went wrong. My time was similar to what I have been running on 10k tempos just in training. This just isn't right.

Wondering what I ate for breakfast? A Clif Builders Bar like always - over 3 hours before the race. I just don't get it. It wasn't like I downed water right before the start. Why on earth did this happen?

This race is one of the best organized races I have had the pleasure or participating in. And the route is so fast and fun. Griseløbet is THE race for a fast time - for most.

Because my mom is in town, I even got to go to Bikram Yoga right after the race. It was AWESOME. I don't even feel sore or tight now. I also learned what I was doing wrong that keeps injuring my right foot - hint - don't sit Japanese style if your ankle isn't flexible enough.

I love this song- it makes me happy under any circumstance (so far). For some reason I keep thinking this song is so good that it should be made illegal. Especially the parts in harmony.

Sheesh, that's a shitload of winning prizes! I'd work for that! Congrats. May be you're breathing not in tune with running hard?

Aww, sorry SLG. But don't forget, you ran 41:15 while feeling awful. Could you have done that a year ago? Probably not, right? So...progress.

And you won a ton of stuff. You can never go too wrong with that.

Once again I can tell that the running song you've posted is going to jump to my most-played in approximately 3 days! Petra Marlkund and Medina are some of the top played artists on my itunes and I don't even understand their lyrics.

I'd be pretty happy with pulling out a sub 42 10k despite debilitating stomach pains, but as a runner with a pretty finicky stomach and head both during and post runs, I understand your bafflement and frustration.

Sorry you're disappointed. That loot would be enough to make me forget about a bad race. If a 41 min 10K is your bad day, I can't wait to hear what happens on a good day.

Seeing you there in the picture on the 1st place just made me smile big. BIG smile. Good for you and think about what you will be able to do when you feel good.
And remember, you telling what you do when you hurt - teaches me not to be scared....

Munk just ruins the "Spot the Dane" game - could spot him from outer space.

I was enjoying "Breezeblocks" by Alt-J until I decided it sounded like an Adam Sandler parody; now I can't separate the two and I hate it.

Rebecca- I LOVE to get that feeback on the music. Makes me happy to think of you rocking it out to Medina!

Steve Q--- are we related? Any form of Adam Sandler + music is intolerable in my world, too. And now you may have ruined a great song for me. Oh well. I was kind of sick of it anyway. Though the video is really something.

I am just like you, in that I underperform (based on my training) @ 5K-10K. I know how to race the HM and marathon, and I typically get the time that my training points to, but then in the 5K I never do as well as expected. I have a friend who told me that in order to race well at short distances, one needs to run a lot of those races...Good luck, you are faster for sure, whether your races are showing that or not

Dang it! There always seems to be something going wrong at your shorter races. Untied shoes, blizzards, stomach pains... It's like you are a magnet:)

Just keep at it and you will get that sub-40!

I think you're awesome for dealing with the pain and pushing through to the end. I also agree with the comments about the loot. It would take the edge of a disappointing time.

Hello from a new reader! I came across your blog this morning while trying to convince myself that I wasn't damaging my baby by continuing to run through my pregnancy (33 weeks now). Thank you for writing such informative, comprehensive posts! Before I got pregnant I was starting to train for my first ultra, but that's on hold for now. Your blog will certainly provide me with much-needed inspiration when I resume the cause in June!

Right now I've got my sights set on a marathon in May at 36 weeks. I have OB approval and I'm prepared to run/walk the whole thing, but I'm coming up against a lot of opposition from well-meaning friends and family, so it's nice to see that I'm not crazy.

Hi Jene! THANK YOU! It means so much to me when pregnant women find encouragement here. I can't PROMISE you're not crazy, but if you are it is NOT because you want to run a marathon pregnant. :0) As long as you take it easy and listen to your body, you are most certainly in for a good experience. There is actually now the beginnings of a table under the tab at the top "running in pregnancy" where you can read about runners' experiences. I'm hoping to get more contributions- but trust me when I say there are tons of women with positive experiences out there. I still have no evidence or reason to believe that running a marathon in pregnancy is dangerous. I am really happy you have you OB's approval!! Best wishes and thanks for commenting!