Saturday SR and I ran our first 50 mile race. It was near Manistee, MI, in the Manistee National Forest. Driving through the beautiful, heavily wooded area of northern Michigan, we knew we were in for a treat.

We had taken the Milwaukee, WI to Muskeegon, MI ferry with my parents 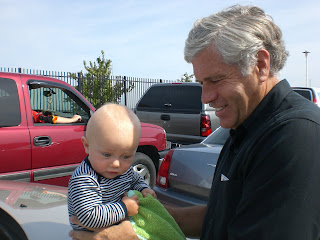 and The Bois. It was a couple hours from the ferry to our little cabin at Pine Creek Lodge, just four miles from the race start. It seemed like the closest lodging to the race.

We eventually found a bar for dinner, called Jackie's in Irons, MI, where pickup trucks lined the parking lot. And almost all the patrons donned cowboy hats. 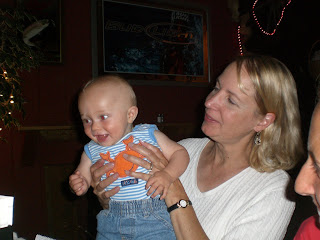 There was plenty of dancing and karaoke. The Bois was as mesmerized as we were. The food was really good, but I for one was really nervous about the race. I started to feel nauseated.

Back at the cabin we tried to get to bed quickly. And we actually did. But it was so warm and the little Lorax was kicking and moving right next to me in our little bed. I kept thinking about how I just wanted to start the race. I was so antsy to run. I finally fell asleep around 2 am. Normally I would be bothered by this, but I rarely get much sleep before races and it actually doesn't seem to affect how I feel the next day.

We woke up at 6:15 to a beautiful, cool morning. I kept imaging the dark woods and winding trails. I drank lots of coffee and think I managed to eat about 1000 calories worth of chocolate chip coconut brownie bars before the start. 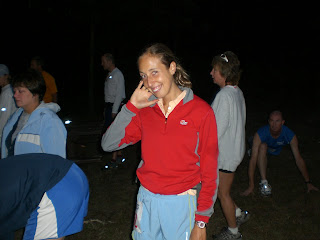 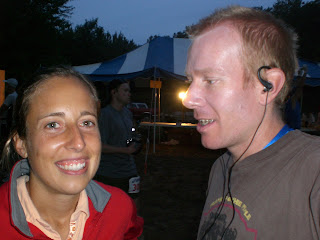 I wore a water belt around my waist with water in it. And I had my ipod. I regret immensely that I didn't bring my camera. I made two trips to the outhouse and, happily, I managed to avoid bowel problems the rest of the day.

This race has a marathon and a 50 miler. Both start at once. There is one loop for the half marathon and the 50 milers do that loop twice. There were about 300 participants there.

It had been a week since my last good run. My entire body was aching to start. I was walking back from saying good luck to SR when the gun went off. For the first mile or so, I went way too fast, just until I could let all of the people at the front pass me. One man was kind enough to tell me that if I was running the 50 miler, I was going too fast :). Strangely, I was a bit hurt by that, but I, of course, slowed down.

At around mile 5, I heard a pack coming up behind me. They were shouting out their pace and seemed to know what they were doing. I latched on to them. Initially, everyone made fun of my accent, which according to my parents has become the same strange mix of a Upper Midwestern-Danish accent that SR has. I was surprised it stood out so much among Michiganites.

I would stay with two of those girls from the pack for the next 3/4 of the race. Their names were Mandy and Rachel. Both from around Ann Arbor, they knew each other from a running club and a running store that Rachel ran. Mandy had a garmin-type device and we were aiming for around a 9 minute pace when we weren't walking hills or stopping at aid stations. Our stops at aid stations were brief. And they convinced me to replace my water with Gatorade to get more calories, which I did.

It sounded like both Rachel and Mandy had had experience winning 50k races in the area (I began thinking I'd do anything just to hang on to them). This was Mandy's first 50 miler and Rachel's second. They did a great job keeping an even pace. After a while we switched off taking the lead. We had such a wonderful time talking about famous ultra runners, enjoying the scenery and sharing bits and pieces about our lives. I would love to run with them more often.

I ate 1 or 2 peanut butter sandwich squares at each aid station and had a cup or two of water or Gatorade.

The second half of the first loop (starting around mile 12) was quite hilly. We walked all of the hills. By the end of the first half, I felt great. I wasn't sore anywhere. This was despite having already taken two tumbles. We did the first 25 miles in 4:15 and found out we were in 3rd, 4th and 5th for the women.

At this point, my parents told me SR was in fifth for the men. The Lorax was looking at his toy fish and wouldn't give me the time of day.

After a brief refueling, the three girls were off again. It was staring to get a bit warmer, but luckily 95% of the course is in the shade of the enormous and amazingly varied trees of the forest. At the start of the first loop, we walked a very gradual incline and I considered pulling ahead. But I knew I had 25 miles to go, so I held back. Then we picked up Jeff (also from Michigan). I knew he would be a lot of fun when he said half of the people he knows call him Tim because of a misunderstanding he never bothered to correct.

At mile 30, Rachel began to feel ill and dropped back. Mandy, Jeff and I made it to the 50k mark at just over 5 hours. I couldn't believe I was ahead of my 50k PR time. I entertained the idea of trying a gu at the aid station, but Mandy warned me not to try anything new on race day.

At around mile 37, I got a big second wind. I took off ahead of Mandy and Jeff. I even thought I might catch SR if I went fast enough. I saw my dad at the next aid station and he said that SR was 1 hour and 20 minutes ahead of me. Wow. I was so proud of him.

I reached a sign that said 3.9 miles to go. I couldn't believe how quickly time had gone! Wow. I put on my music for the first time and mustered up a sprint, knowing I had just over a 5k left. I then reached another aid station at the point I thought would be the finish and they said there were 5 miles to go. There's no crying in baseball, though. (The last sign must have said 3.9 miles to the next aid station)

I told myself over and over "It's just a fun run in the woods." I tried to convince myself I hadn't run at all yet. I listened to music and kept my spirits up. Over and over I heard the crowd at the finish line, but when I took off my headphones, I would realize it was my ears playing tricks. I passed one guy, who served as reassurance that I hadn't gotten off path. He asked me when I dropped the girls. Apparently he was one of the 19 members of their Ann Arbor running club there that day.

The trails were soft dirt winding through one mini ecosystem after another. All of the hills I walked the first time around I ran. I didn't walk at all the last 9 miles, with the exception of one very steep hill. I was a bit sore from my accidental 5k sprint, but not too bad. I finally saw the sign saying there were 0.9 miles left. This last stretch was eternal.

As I saw the finish line, I turned around to see a woman in a white T-shirt and black spandex pants right behind me. My heart nearly jumped out of my chest. I turned back again and she had disappeared. Wow. A real hallucination. As I crossed the finish line, the announcer said "Here's Sealegsgirl... the mom of that cute baby!" 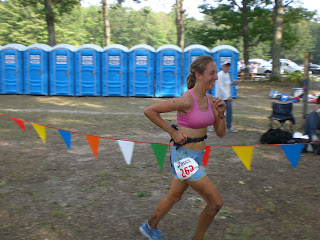 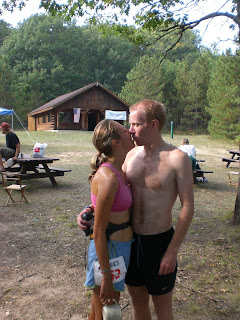 Then my parents came up to us with The Lorax. He was smiling and yelling and holding out his arms to me when he saw me. It was a moment I may remember for the rest of my life.

One of the race directors came up to me to congratulate me and handed me a $50 check! And I received a sweatshirt for first in my age group. On top of that, every finisher receives a really nice mug.

I was so happy. It was a wonderfully organized event on a gorgeous course. And I made some friends. I wanted to stick around to see them finish, but after trying to stomach some food, I became quite ill and we all retreated to the Pine Creek Lodge.

What did I learn? Running 4 miles a day for the 6 days before the race is enough tapering. Drinking Gatorade during the race is a great way to get calories. You don't need gu to do well. Walking the hills during the first 30 miles is probably essential to prevent getting sore. Running with a group is great incentive to keep going at a good, even pace.

Thanks Rachel, Mandy and Jeff if you guys are reading this! A huge thanks to my parents for watching The Lorax. And, of course, I couldn't have done this without SR, my running partner and the love of my life.

We would do this race again in a heartbeat and would recommend it to anyone looking for a 50 mile run. 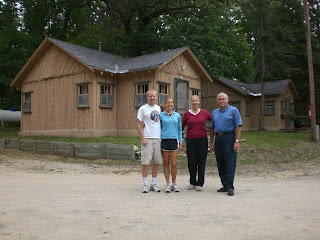 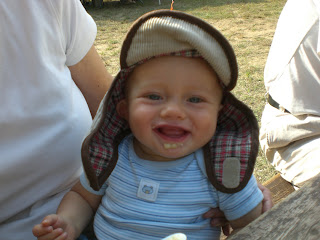 Running song of the day (and my comic relief at mile 47): "Ladies of the World" by Flight of the Conchords
Posted by sea legs girl at 15:08

Way to go! Kudos to you both!

Congrats! You're a superstar!

Love the report too and the finish line story.

As someone who's been more of a lactater (lactator?) over the last year than a runner, I am truly impressed with your ability to do both. You are inspiring.

You learned things in one race that took me many years to learn (well, actually I'm still working on some of them). When I read you PR'ed at 50K, I was expecting a bad crash. Third place! That's great.

What an awesome experience! So happy for both of you guys!

Congrats on finishing your first 50 miler, and for doing it sooooo well! You and your family look great in the photos as well.

Congratulations! What a lovely day for you and your family.

Woman, you are a true Rock Star. For real. Way to GO!

Flight of the Conchords? OMG, we love that show.