I could call the following a race report. Or I could call it advice on how to inspire yourself and PR at a half marathon when you feel completely out of shape.

Anyway, the half marathon was in Greve, Denmark. It's on the East Coast of the country. Don't be fooled by the name of the race.

I haven't been able to do any sort of good training since the marathon two months ago because of my left knee (some sort of tendinitis). But after swimming nearly every day last week and hardly running at all, I finally got rid of that knee pain.

There were about 350 participants today (for both the whole and a half marathon).

SR's parents offered to watch The Bois during the race. We are just so lucky to have them living nearby. 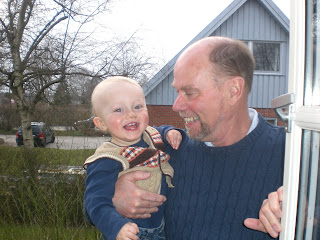 As is typical in this land, the race started at noon. Many longer races here start out by running a loop around a track at the town's sportscenter. And they also finish in the track (much in the style of olympic marathons).

Shortly after we sarted, there was one woman ahead of me (that I could see) and one right on my tail. I kind of felt like crap and kept asking myself why I ate so many of those flødeboller for breakfast. My previous half marathon PR was just shy of 1:35, so I was going for about 1:45 (considering the lack of training). I gradually lost ground to the woman ahead of me. And the woman behind me was catching up. How irritating. When the woman behind me moved up to pass me, I sprinted ahead like a crazy woman (I need to do something to keep my spirits up during these hard races, so I use other women as inspiration... ). About 1km later, she caught up again, so I sprinted ahead again like I was saving The Bois from the jaws of death. By this point, I'm sure she figured I had nothing (and was insane). Or maybe it was the dirty pajama shirt and baggy pants that gave it away. This same scenario happened five more times and it got to the point that I would look back at her and smile before I started sprinting ahead again. I was hoping it had become like a joke to her, too. Anyway, the last time I sprinted ahead, there we 6k to go. Much to my surprise, I got a second wind (thanks once again to the song "That's not my name" by The Ting Tings (what would I do without this song during races?)). I pulled away from the woman behind me and began to enjoy the beach and the limited views of the ocean. There were nice pavement and dirt trails the whole way. With less than 0.5 km to go, I noticed another girl right behind me. Despite my having run the last 5k in 22 minutes, she had caught up! Wow! Now I really sprinted and made it across the fine a good 15 seconds ahead of her.

Here I am just before the finish. 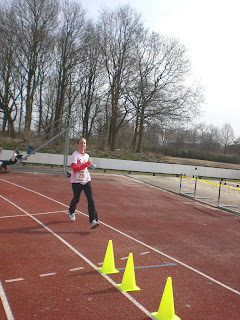 But then I realized we needed to swipe our time card as we crossed the line (strange system), but that girl behind me swiped hers first. I tried to explain what happened in my breathless Danish, but the women at the finish line just found me irritating. Oh well.

I PR'd with just over 1:34 (though the exact time will never be known thanks to the confusing chip system). And they ended up awarding me 3rd place (which was correct... SR explained to the race director what happened with the finish and the chip system). SR got 2nd place with a time of 1:17:30. We both got money prizes, which were awarded on a podium! What fun. 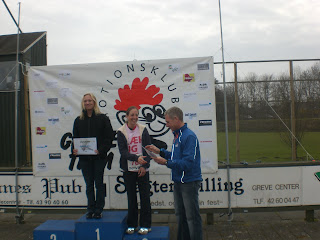 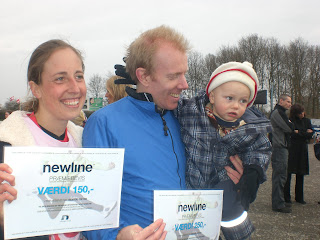 Awesome work!!! Maybe you gain speed when you run less ;)

Way to go!! I guess a break every now and then isn't always a bad thing. PS... when did you turn 29? Did I just forget that you posted a birthday post or did you not?

That's really nice of you to ask about my birthday. I actually turned 29 on June 23rd (so I'm almost that scary age with a 3 and a 0).

Races starting at noon and cash awards - I'm thinking I should learn Danish.