As we drove to drop off the kids at their grandparents' in Copenhagen, we almost landed in the ditch a few times because of the wind gusts, which had blown snow up onto the highway. The wind was a steady 35-40 miles per hour and stronger at times. Not exactly what most people would consider ideal conditions for running a marathon. But I was SO excited. This was going to be something I had never experienced. I was just hoping they wouldn't cancel the race.

I figured I could pretty easily run a PR today. I knew the route and felt good despite 3-4 hours of sleep (I don't know why I still get so nervous before races). But the wind and the colder temperatures than last year changed the story a bit. SR was also running the marathon this year. He had run the half last year with the baby jogger. Thank God there was no baby jogger involved this year.

At the start line, I saw Britta Karlsson, who had handily beat me in the Albertslund 6 hour run this past fall. I now figured I wouldn't win or PR, but I was just so excited to run.

The run started out in snow and then went out onto roads. 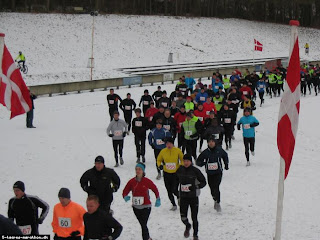 There are a bunch of steep hills at the beginning, but the wind wasn't too bad yet. I kept an even 7:45 minute/mile pace and was just trying to keep myself from running faster. I ran with a bunch of guys and could not see any females behind me. Strangely, I could see SR ahead of me for about the first 6km. Man, he was starting out slowly!

At about 9 km, we took a turn down a deserted road towards the ocean and the wind was so strong that people we nearly being knocked down (okay, mostly me). It was like when you try to run in a dream but you can't move. It was so beautiful with the huge whitecaps on the dark ocean and the horses on the farms with their manes blowing in the wind. I pretended it was my first moment on Earth and that I'd never known anything but the feeling of running as fast as I could into a headwind. Soon we turned a corner, and the wind came off the ocean from the side, but it became even harder to run. I found a group of guys to run behind and things got a little easier. Soon we were out of the really windy section and I talked with the other runners around me. I ran for a while with a guy who had run 30 marathons last year.

At about 13 km, I was running at my comfortable 7:45 min/mile again. I love having the Garmin on. And I stopped for hot chocolate at an aid station. I will just comment that hot chocolate is a great sports drink for winter. Calories, electrolytes, warmth...

I came through the first half marathon in 1:43, thus winning the women's half marathon! The woman who came in right behind me was sprinting to beat me, but little did she know I was doing the full marathon and she'd get her prize money after all.

Now I just needed to do the whole thing again. Sadly, the wind hadn't let up and my legs were tired of battling it. I ran the first half of the second half marathon in a hour!! I was more than a little disappointed. But once I got out of the wind again, um, I got a second wind, no I won't say that. I'll just say, I felt much better. The people on the sidelines were really cheering me on. I was glad they knew I was first woman (and that I wasn't mistaken about my place). I then realized on was on pace for a PR. I kept my pace at about 8 min/mile and had some good music on (Thanks, Cliff!!). My comfortable marathon running pace has definitely gotten faster. The last part of the race is on snow trails though a wooded area. Man, was I excited. I came in at 3:37, beating my previous PR by two minutes (on the same course last year and at the 6 hour run).

After talking with a few people afterwards, it seems we should subtract about 20 minutes from our time today to compare it to a warmer, flatter, less windy race. Fun to think of running a 3:17! All I can say is the intervals and tempo training the last two months have really helped. Plus I ate a ton yesterday and I think that helped, too.

Britta also ran a great race and came in just 9 minutes behind me. It is hard to say if I have become faster or if it was the race today was just a completely different type of race than the 6 hour race in October.

SR also had a great race with a time of 3:02, also a PR for him (we don't tend to run normal marathons), and he came in second. It was also his birthday yesterday, so it was a good little belated present. He apparently passed the whole field of top men in the last 10 km. He was beaten by Ole Karlsen, a famous runner in Denmark, affectionately known as Ultra Ole.

It was an awesome experience and I would recommend this race to anyone who wants a winter running challenge.

Here is one happy couple. 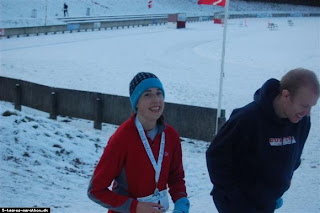 I am ashamed to admit that my favorite running song of the day:

Watcha Say by Jason Derulo (I hate the way he samples Imogen Heap. I hope Imogen Heap got some good consolation for it. But I just LOVED running to it)

SR's running song of the Day: Run by Leona Lewis
Posted by sea legs girl at 21:01

Wow! With these winds - cheers on you guys!

Excellent, and congratulations to you and SR!

P.S. My CDs arrived yesterday. Thank you so much, Tracy.

Oh I also have conflicting feelings towards that same song.. the sample of Imogen Heap is too fast for me.

Congrats! But you really need to run a flat and fast marathon. Good lord.

Oh my CD's have made it as well!! Thank you so much :) I gave you a little shout out on my blog.

Great time, especially in the winter! I got the CDs and thank you so much! It's a great variety of music and I love hearing what bands in other countries are up to. I am planning on sending you two - my "top 10 end of race songs" and my "top 10 most inappropriate running song" (get ready).

I have to admit I am excited to hear what you all think of the cds. Thanks for the marathon comments, too!

Awesome run! and a great report. some dodgy conditions to PR in - congrats on a great race - and to win too! well done to SR also. that's got to feel good.

oh - and it looks like I can actually make comments again - I'm having blogger issues these days!