Yesterday morning SR and I quickly fit in a relay race before we had 14 guests over at 2pm. The event was called Danmarkstafetten - Næstved. But I've realized that if I use an event's real name in my post title, my blog has a disturbing propensity for coming up second after the actual race's website when I do a google search. But since this is in theory an anonymous blog and I want to be able to write without feeling as if I need to write like a newspaper reporter, I've realized I need to adopt some new under-the-radar tactics.

Anyway, in our backyard, sits a beautiful forest surrounding the river, Suså. It is an almost daily source of joy for us. Yesterday was the enormous running relay Danmarkstafetten, which takes place right there in the forest every June. How could we miss it? Actually we almost did until our friend Rasmus M called and told us we had better not miss it and yesterday morning it sounded like a fun thing to do. There were certainly upwards of 1000 runners there. Actually, I read that last year there were 500 teams of either 3 or 4 people, so it was probably closer to 2000 runners. All-women teams are required to only have only three members otherwise they, being of the weaker species, might drag the event out the entire day, or something like that.

The best thing about this setup was we could bring Natali and The Lorax and take turns watching them. And for once Natali was in heaven because all of her school friends were also there, two of them actually running and others supporting family, etc. There was a huge trampoline and Natali and her little friends took turns hopping with the blonde, big-headed Lorax. Needless to say, he was also in heaven.

This is not the kind of course one should expect to PR on. At least yesterday, the trails were very muddy from the recent rain and the entire course is on trails or grass. And there are little hills and just tons of people, so I rather quickly, though reluctantly, gave up the idea of setting a PR. I had on Friday run a 20:38 5k in the middle of a training session, so I figured I was in pretty good 5k shape, but didn't know exactly what to expect. SR on the other hand has surprised me this year by not doing any sort of speed work. I see it is a bad sign that he is just so tired from work and his long commute and helping take care of the kids, that he doesn't have it in him to train hard in the evenings anymore. But the thing about my husband, that I have trouble explaining, is he is at this point where even if he doesn't do any speedwork at all, he is still extremely fast. 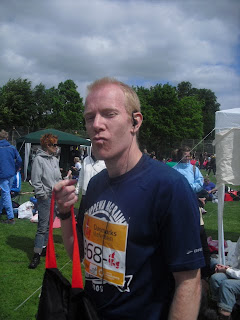 I guess you could interpret that as a bragging wife or a wife who just doesn't understand how someone can continue to be so fast without doing the speedwork he is prescribing for me. Anyway.

On to the race: I lined up next to one of my gal friends from the tri club and a guy, who I previously didn't know, who was really impressed with my Chippewa 50k t-shirt. A safe generalization about Danes is they LOVE the romantic idea of Native Americans/American Indians. I found this to be the same of The French. Anyway, not much time to chat. As typical, I started out way too fast, at a below 6 min/mile pace, but with all of the sudden barriers created by young boys starting out at lightning speed and then without warning dropping off to a walk right in front of me, I needed some fast running to end up with a decent time. God, it was fun to watch all the young guys who I passed freak out, sprint to keep up with me, and then swallow their pride and fall back. Along many places on the course, there were people cheering and some of them knew me and since I was the first woman, I got lots of screams and cheers. I ran the entire time right behind the guy who loved the Chippewa tribe and we came in at almost exactly 20 minutes. As I was coming up to the finish/switch area, they yelled on the loudspeakers, Here's SLG (okay, they said my real name), the first woman from Team Lorax!! And the huge crowd cheered. What fun! SR sprinted off.

I had a moment to play with the kids and their friends. Natali's friend, Ulrikke was so proud I was the fastest woman and Natali wasn't sure if she should be happy or if this meant my running obsession would be fueled even more. My friend from the Tri club came up and gave a congrats and then asked if I'd be on their team to represent our tri club in the Danish Nationals in September. She has seen me swim, but may regret her invitation when she sees me bike. But of course I said yes, thinking I had better get out there cycling more often.

Soon I went up to switch off with SR. Just before SR came in, I saw Mette B, and she had a time right around 19 minutes. So we have stayed about the same amount apart in our times, which made me happy, since I know she has gotten in much better shape in the last year. SR came in in just over 17 minutes. So, no, it's just not a fast course. My second round, I just had more fun and enjoyed passing people and enjoyed the beautiful scenery and muddy trails. My second was in just over 21 minutes. And then SR's second was again in just over 17. 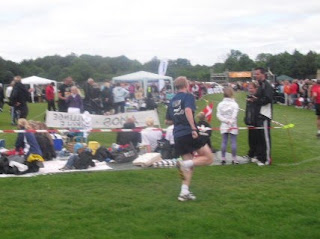 A great day for Team Lorax. We didn't have time to stick around and see what place we got since we had guests coming and food to prepare. But I think we were second of the mix teams and the 4th or 5th team overall. 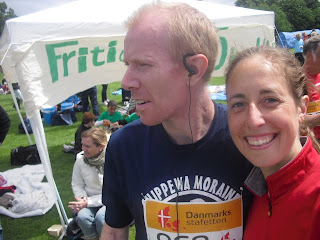 What a fun day! I can't believe you did that and then went and threw a party in the afternoon. My Sundays are slothful in comparison.
Just FYI, the Dutch and the Germans also have some crazy obsession with Native American/Wild West stuff. I remember seeing a show on German television all about the Cowboys and Indians clubs they have in Germany. Crazy.

So did Rasmus M. bring his wife, Helle?

Yeah, I do love my Chippewa Morraine shirt. We'll have to come back to get a new one next year.

Diana,
we prepared basically everthing the day before, so we were able to fit in some slothing. An important part of any Sunday! My favorite exmaple of European fascination with Indians is the restaurant "Indiana Tex-Mex" in France. There are pictures of the wild west on the walls, but no one really understands how the state of Indiana got mixed up into the whole thing.

Steve,
Well, Rasmus M's wife's name is Regina, which actually sounds like Helle when you pronounce it in Danish.

Mr. Bastard, we barely have enough money to do local races anymore!