I guess when you have really low expectations, it's easy to be pleased. And I had tons of excuses I was prepared to use if my intervals didn't go well: "I'm 3 weeks post partum", "I haven't run intervals in over 9 months", etc. I really didn't know how early was too early to start interval training, but I "chanced it" (what I was chancing, I don't know) because it felt right.

You know that when you feel like doing more after you're done that you did not go hard enough. But maybe it was my legs that were my limiting factor today and not my heart and lungs?? (I don't know why that until today I had never though of going the opposite direction on the track on alternating miles - to sort of even out the effort of the legs)

Am I wrong in thinking this means I could run a 10k in under 42 minutes right now? Suddenly I'm excited by the idea of shorter races. Honestly, I never get a runner's high during long, slow training runs, but, intervals, well, I certainly had one today!

Now, let me just say a few words about post-partum exercise (granted this section doesn't apply to everyone, but I've gotta get it out of my system). I've just gotten tired of so much bad advice based on old-fashioned beliefs, especially here in Denmark.

Women are told here by physicians to wait 8 weeks before beginning any kind of exercise besides walking (happily, my midwife said I could start running whenever I felt ready as long as I stopped if I had an increase in bleeding).

According to the Danish pregnancy book given to me at my first prenatal visit: Graviditet, fødsel og den nye familie (2009) p. 125:

- "No matter what kind of shape you are in, you will not be able to run or hop for three months."
- "Maybe you dream of a flat stomach again, but you should avoid sit-ups."

Then again, if you consult The Mayo Clinic's patient guide from the US, they advise the following:

"In the past, health care providers often instructed women to wait at least six weeks after giving birth to begin exercising. The waiting game may be over, however. If you exercised during pregnancy and had an uncomplicated vaginal delivery, it's generally safe to begin exercising within days of delivery — or as soon as you feel ready."

Of course, I didn't need to look these two sources up. It was simply of cultural interest. I am not aware of any evidence that post-partum exercise quickly after birth gives an increased risk for any health problems down the road - or even at the time.

And I know I'm not alone in thinking this. Here is Joy (American, of course) 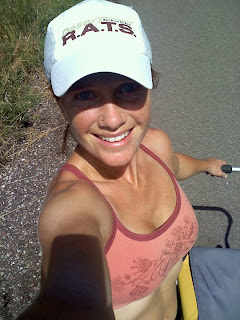 out for a run less than a week after having here baby boy, Zeke. Looking beautiful, Joy!

One risk I have heard is prolonged incontinence. Clearly right after you give birth you'll have problems leaking urine when you run or jump. But there is no evidence that you will have a prolonged recovery/incontinence down the road if you start running early post-partum. Here is a good review article that helps debunk that theory:

(personally, I was over the incontinence problem after between 1 and 2 weeks when running and I totally forgot about doing Kegel exercises this pregnancy).

There has also been some discussion in the comments section of this blog about running or exercise affecting milk production. SR came up with a cow analogy that I like: "What would you rather have your milking cow do, roam around in a field all day or be penned up in a cage?" But if you prefer human evidence: exercise even seems to also be okay with concomitant weight loss during lactation. See this study for more: McCrory MA, Nommsen-Rivers LA, Mole PA, Lonnerdal B, Dewey KG. A randomized trial of the short-term effects of dieting vs dieting with aerobic exercise on lactation performance. Am J Clin Nutr.1999;69 :959– 967.

What other concerns do people have? For me, the biggest concerns would be eating disorders, osteopenia, stress fractures - but these are concerns for all exercising women, though maybe even more so in the post-partum period.

Now finding the opportunity to exercise as a new mom - THAT is another matter. Especially in Denmark where there is absolutely NO day care available until a child is 9 months. 9-12 month's maternity leave for a mother in Scandinavia sure sounds luxurious, but with no possibility for a break, it is way more than a full-time job.

Is it any wonder with the above factors that there were 1197 men finishers at Challenge Copenhagen ironman and only 169 women?! (it's not quite 50/50 at US ironmans, but it is much closer).

Interval running song of the day: Dance Floor by Apples in Stereo x 12 (why change it if it works??), cool down song by a Dane living in the US: We Turn it Up by Oh Land

Weird. Does anyone else suddenly see the sidebar at the bottom of the blog? Anyone know how to fix this???

Wow, speedy, wow. Didn't read any stuff on post-pregnancy research (apparently, I had been in menopause for the last 5 years and never told, and to think we had to contemplate and make a decision on having a baby in this second marriage...could have avoided that talk). But the numbers wow'd me. Great job.

Thanks, Olga. I think you intuitively know everything I wrote about post partum exercise anyway!

Stefanie, I would have expected faster from you had your stupid injury not happened. It can't be long now before you can run again??!!

Re- the sidebar (my above comment) it just fixed itself.

Here in Germany the official line is no exercise until 6 weeks postpartum. Obviously I'll wait and see how I'm doing after the birth, but my gut reaction is "yeah, whatever"...

Can't wait to read all the studies you posted. My midwife here has been very supportive of my exercise during pregnancy. We'll see what she says about running after the birth. I believe the rule here is no exercise for six weeks, but I generally ignore those kinds of things and go with what actually works for me.

If you're looking for a shorter race to run, we've got some spaces free on our team for the Dam tot Damloop here in September. ;)

You are just so great and I can only admire you. Pity that I'm to old to have more children, would have been nice to try your way.....

I'm like you; I really get pumped up when I do intervals. Long runs are fun, but it's when I break myself down doing intervals that I really get the "runner's high".

You are doing great!

I began running again 2 weeks post-partum with my son, and maybe 3 with my daughter. My OB had no problem with it since I ran through the pregnancies for the most part and had easy deliveries. Like you, it made me feel sane to get out and be my old self for a while (though I was pretty slow at first).

I also marathon trained with both kids post-partum, and it didn't affect milk production at all. Even with high mileage. It also didn't suppress ovulation, damn it! Ha!

I did get two pubic-ramus stress fractures almost a year after my son was born. But I attribute that 100 percent to overtraining, looking back. Bone scans, density tests, etc., all came back completely normal -- no osteopenia, nothing.

My point? You are doing great listening to your body. My bigger post-partum overdoing it worry is always, always mastitis. Which I just tend to get, I guess (5x!).

Wowzers. You are fast! It is so interesting to me that many female runners seem to make a big jump in ability post-childbirth.

I had a c-section, and began running before 6 weeks. I felt good, and it felt so amazing to run and not be toting around that extra weight. I don't know where the 6 weeks thing comes from...maybe the same antiquated place that contends that an elevated maternal heart rate is bad for the fetus.

Heather, I had been wondering what your German input would be. You're allowed to call me a "bad ass" anytime, by the way.

Diana, I want to run in the Dam tot Damloop. And I though løb was a cool word for run. Loop is even better. Funny that we didn't end up calling it "leap" in English when all the other germanic languages seem to have such a similar word. Some crazy brit was just like, "I'm gonna call it to RUN".

s.a. regarding leap in ability after giving birth, this article is really interesting on the doping effects of pregnancy. I think Stefanie S will like it, too. http://www.timesonline.co.uk/tol/life_and_style/health/features/article6831281.ece

Wow - no day care until 9 months?? There is one major downside to long maternity leave!