That's how I won a triathlon

Did you ever just take a step back and think to yourself "I can't believe I've become one of those people who wears a unitard triathlon suit?" 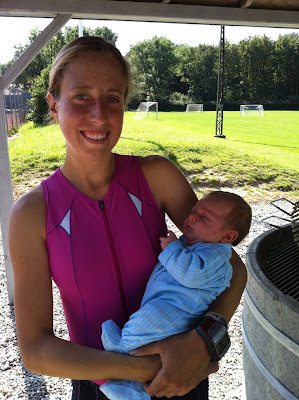 And then did you ever take an even bigger step back and think "I can't believe I'm talking about what I'm wearing instead of talking about the 4 week old baby in my arms?"


Well, along those lines, this is why I'm having so much trouble writing a blog post, when so much of my life and thoughts revolve around this little guy. But I always wonder how much a reader would get out of learning exactly how much Mattias' double chin grew in the last 24 hours.

So I'll write briefly about our triathlon on Sunday (hence the title). You see, if I were actually good, I would never mention the fact that I won (like mmmonyka, who won a big triathlon and hardly mentioned it! Congrats, mmmonyka!). But this was probably the one chance I'll have in my life to say it, so there it is, in the title. And now I will ever so briefly and smally mention the fact that there were only three female participants...

SR and I both participated and my mom came along to watch us, Mattias and this guy... 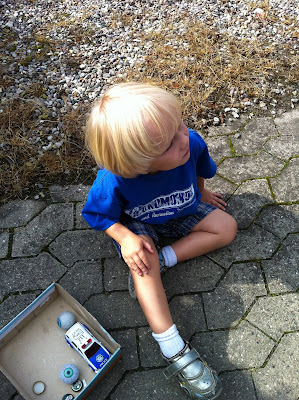 The Lorax has developed a fascination with playing with toy eyes that has developed completely unrelated to my job as an ophthalmologist. It's a little weird. 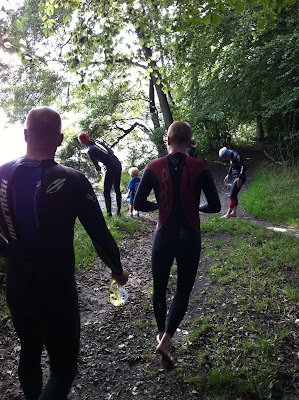 That is actually me - the woman already in the water. 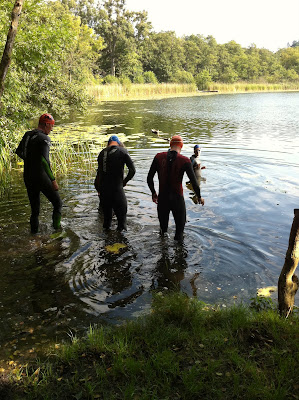 The swim went okay for me, though not super as I had gone on a long swim the day before. SR actually beat me - for once. So either he had a good swim or I had a bad one. Neither of us knew our swim times, unfortunately. I was the first woman out of the water, though!

My transistion was not without hindrance. I got to my bike and I was huffing and drying off and struggling to get the wetsuit off as my mom said, "SLG, can you help me find a nuk for Mattias?" Well, how can you say no?

Anyway, I found the nuk and got on my bike. It does appear that I'd lost some of my competitive drive at that point. 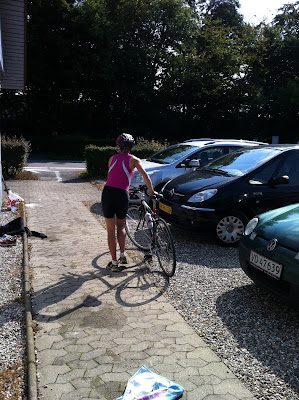 I felt awesome on the bike and could see from my Garmin pace that I was booking it. I passed the one woman who had gotten ahead of me in the transition zone (our club captain, Anette) and then as I was ascending a hill in front of her, my chain fell off. Øv. Too much hyper-shifting on my part. But I put the chain back on and ascended the rest of the hill. After about 2-3 minutes, I repassed her. I love biking like a bat out of hell down big hills with sharp turns in traffic. This used to scare me, but these days I embrace it.

I saw all the men coming back after the turn around and figured I should turn soon, but missed the turn around and went over 1 km in the wrong direction. Øv. By that time I figured I had missed something. I biked back as fast as possible to maybe, maybe catch up to Anette again. And with 1km left of the bike, I passed her.

I don't wear bike shoes, so my transition to running is always fast.

The Lorax looked to be doing okay, driving an eye around on his police car. 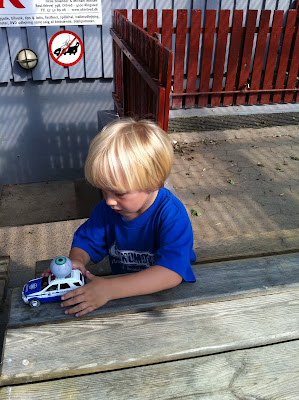 And I was ready to run! That's my iPod I'm fumbling with. 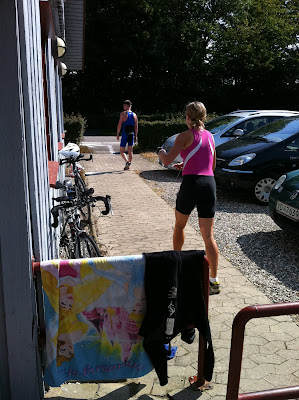 I was happy with my running pace and felt good on a hilly route. I just wished I would have had a woman near me to push me a little bit. But as it was, I got a good 6km training run out of it in 26:50.

Here is SR, feeling great, and like all three disciplines went well for him, though he had not kept track of time during the race. He ended up taking 3rd for the men, which he was pleased with. 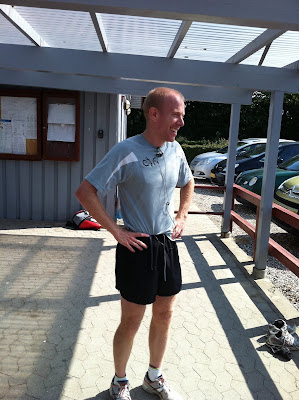 For those of you who don't regularly hang out with triathletes, our male club champion. Søren's bike is pictured below (plate wheel). It cost 65,000 kroner. That is about $12,000. 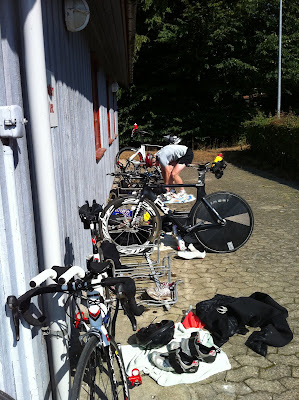 I imagine it is a fast bike. And I also have to say he is a very cool guy and a talented triathlete. But new triathletes, don't be scared: I got my bike for $600 and I love it.

Afterwards the tri club grilled and ate a wonderful lunch. Even my mom said she had a really fun time, despite not understanding more than 1% of what was said the entire day. And I, well, I'll enjoy my little victory while I can. Thanks, HG Tri!

You stopped to find a nuk, lost a chain, went off course and still won - the poor competition, how demoralising!!! Love the neoprene sealant comment, too funny.

I think that you might be the only woman that races 4 weeks after giving birth:)
And you look awesome!

And thanks for the shout out! I had to re-read my post and you are right. I have not realized that I hardly mentioned my placing. It shows that I was more happy with my improvement than with my placing.

A win is a win, no matter how many or few other contestants there were - you were better that them.
And actually, everytime you complete something that you set out to finish, you win (I'm so wise these days after my marathon...;-)).
So be proud of yourself!!

The Lorax is just a Residents fan, minus a top hat [slightly disturbing photo warning]
http://davidclowery.files.wordpress.com/2010/09/residents.jpg

I keep debating whether or not to post my "douchebags" post - the unitard now edges you closer to the standard ($12000 bike in a race with only 3 competitors would seal the deal). Congrats on the win.

Steve - got the link through my email. Loved it. I have to show it to The Lorax.

I can't wait for the post on douchebags. And the weird thing is, I'd be proud to be mentioned as an example of one. (what I'm trying to say it, post it!!)

And nice job proving it's the athlete not the machine that matters most in triathlons :)