If there is something that will almost instantaneously make you a better runner, it is directing or volunteering at a race. There is such an enormous amount of work and care that goes into races- I will say trail races especially- that you, whether you know it or not, will forever stop taking the privilege of racing for granted. And actually probably enjoy it even more.

Anders, the son of a Bahamian (from the Bahamas??) woman I work out with and ex pro American football player, had this awesome think-outside-of-the-box idea, when he asked me to help him start a midnight trail race in Næstved. Anders is the type of guy everyone is friends with, so I had no doubt it would work out.

And it did! Here a picture from the start of Zulu's Nat Marathon.


So these are some pretty tough cookies to show up at midnight when storms were predicted in record heat and they knew Anders and I had designed a very techinical forest route. In particular, I warned SR about Christian (front row in white) being someone he would have to work to hold on to. Christian just took 6th at the 10 Peaks 73 km race in the UK. I was thrilled when SR returned this morning at 4 am or so to tell me he had run the whole race with Christian and they had a smashing go of it and both finished in 3:36 to win jointly; Christian officially 1 second before, so now I owe him a prize...

After my 5k race yesterday (see below), I set off to set up the course markings and then took them all down today with the help of the boys and the baby jogger. It only took 3 ½ hours :0). 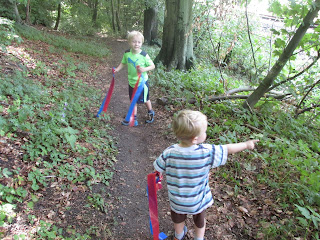 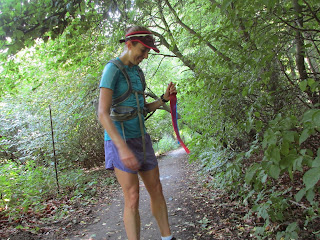 ... or gathered ice cream. Turned out they liked the idea of it better than the taste. Back to the raspberries after a hard day's work
I feel I have inculcated the sense in at least Christian that these races don't happen -poof- out of thin air.


Yesterday morning, like every Saturday morning, was the free Park Run 5k in Fælledparken. Here is the start. I love this picture because it captures the fact that I biked 15km to the start and was drenched in sweat AND hadn't washed my hair for 9 days. Waw! AND, more importantly, there is Jesper. He is one of those guys who is just cool. He is so modest and soft spoken, yet travels all over the world to take on courses like HURT and will be going to UTMB this year. Anyway, I had this crazy idea I could keep up with him- despite him runnig an 18:10 5k 4 weeks ago.
Shortly therafter one of the men fell back and I passed him. This is a new thing for me- passing people in 5ks. The heat and humidity were WICKED, so I knew if I started too fast I would fizzle.
What I didn't know is that Thea was right behind me. She is either 16 or 17 and I have been following her for months now because it seems every Park Run she runs, she takes 20 second off of her time and last time won in 19:44, so I knew she could give me trouble as this is a dirt path and slower than asphalt.

Anyway, I was not able to keep the even pace I had hoped for. I wanted a 19:30, but got a 19:39. That is according to when I crossed the start line. The official time was 19:41. As I collapsed next to Jesper, who had run in 18:45, I was shocked to see Thea tumbling across the finish line right behind me in 19:46. I can only assume my outfit intimidated her :0). Honestly, I look forward to my next battle with Thea and she was very kind and gracious at the fininsh. What fun... 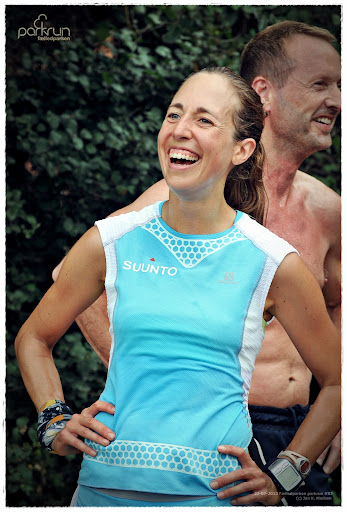 Good to laugh a jolly old belly laugh, isn't it? Or snicker like friend over left shoulder.

Just for the sake of completion, I need to mention I did a training Olympic Distance tri last weekend - the Storebælt Tri- which also was free- and I got a "Tri PR" in all disciplines. Swim: 30:15, bike 1:21 (despite a major wrong turn) and run 43:09 on gravel roads. I was thrilled as it was also blazing hot that day (and I was the only woman!) and speaking of blazing- I was burned by the famous jelly fish here - the fireman (brændman) during the swim. It actually didn't hurt too bad. I am now done with triathlons until I buy a real tri bike- the disadvantage of my bike is too overwhelming for it to be fun.

Running song of the day-

Can I just get this off of my chest? I can't stand Robbie Williams!

OK- much better to go with Nephew's "Gå med dig"

The Salomon outfit is cute! Speaking of which, it cracked me up at the Four Trails every time the (German) race announcer mentioned Salomon, because of course in German it's pronounced Zalomon. It sounds so much...*faster* that way.

Thank God your outfit is blue, my fav shade too! I'll come back to read to whole story later:)

Alicia, it is funny it is pronounced Zalomon in Deutschland. Their Danish nieghbors can't even pronounce the letter "Z", they would either say "c" or "said" and say zipper "sipper", so it is pronounced SAYlomon here. (which also sounds fast, of course :0)).

Olga, the outfit was actually the best part, so no need to read it all ;0).

Well, the win and holding back a girl half your age is pretty awesome too! Congrats!!!

Love the new header photo! That look on your face is pure pain and guts!