If you feel like you have landed on a deserted island when you arrive off of the ferry into the dark Scandinavian winter onto the island of Bornholm, it is not far from the truth. The island, heavily dependent on tourism, nearly shuts down over the winter months, and certainly not even all of the 40,000 people who technically live on Bornholm are there in the winter.

The fishermen and farmers remain; perhaps the watchmakers as well - and also Tine and her husband from Tines Gjesthûz. They were thrilled too, because of Salomon and Tejn's Hammer Trail Winter Edition, they sold out ALL of their rooms. It was unheard of in the winter.

Sometimes I marvel at the places I see and people I have met through running. This is one of the many reasons, I hope trail running is a life-long sport.

I took the ferry from Ystad, Sweden with Pia and Jesper. It was 4:30PM and completely dark already (especially strange since I was still on California time - 7:30 AM). The waves were wicked and Pia got very sea sick, then I did, too. The ride is short, though; it takes only 5 quarters (the faster Danish way of saying "an hour and 15 minutes").

Christian Madsen, director of the Winforce 100k, was there to pick us up and drive us to Jakob Vestergaard's (the co-director of the Hammer Trail races) summer house. In typical Danish style, the house was absolutely freezing when we arrived. Danes never leave anything on when they leave, heat included. We warmed ourselves by the burners with our jackets on.

I'm not sure what happened next- after dinner that is- because I went to Tines Gjestehûz, my lovely Norwegian friend's across the street.

When I woke up, this is what I saw. One of my favorite views from the Fyr til Fyr course in Allinge. But where was the snow? 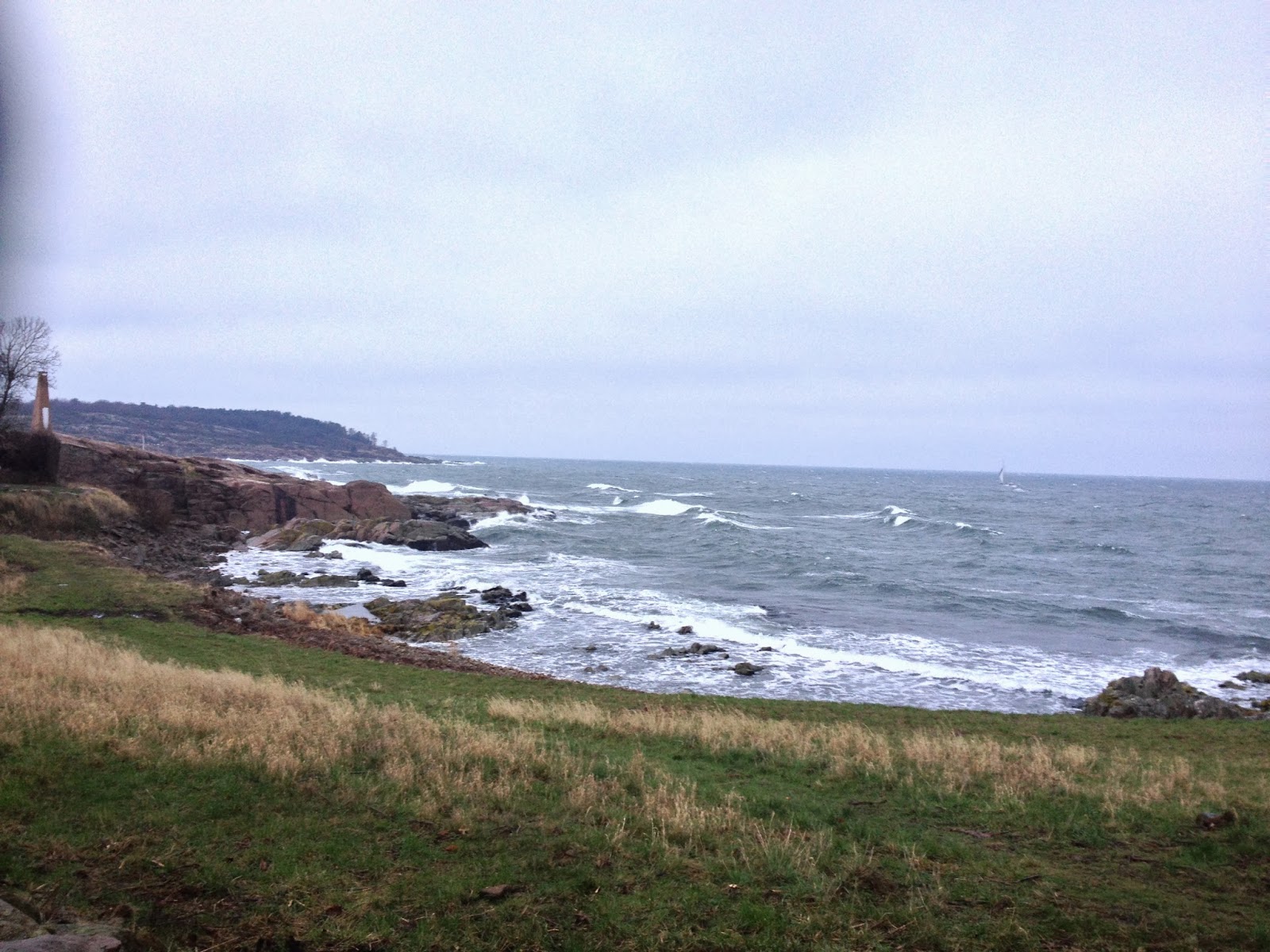 No worries, 3km later on my warm-up run, over to the western half of the island, the snow was piled high. Cool, huh? I love island microclimates!

Ok- so, totally jetlagged and in every way discombobulated, I and 50+ others embarked on the half marathon run. I ran it because I knew it would be hard. Running this course fast, is wicked hard and dangerous, especially when slippery.

I saw Christian Madsen, just before we started; he had broken his finger about 35 km into the 50 mile run. I knew I had to be cautious on the downhills. As we lined up to start, people began to smirk at my shoes. The Bornholm natives knew I needed some more serious grip than I had on my Salomon Sense shoes. I honestly had no clue how muddy, icy and slippery it would be on Bornholm when I had packed two weeks earlier before our trip to California.  And the Salomon Sense shoes are great on - almost - every terrain.

Anyway, Pernille and I were battling the entire race in 3rd and 4th place, with two men not actually too far ahead of us. We really pushed each other. We didn't know of each other in advance so it was a bit of a surprise for us both to come up against stiff competition. Every time we went downhill, Pernille sped ahead as I slid and fell (I pride myself on my falling ability, but I do wish I could fall a little less often), scrambling again to catch up with her. It was fun until we got to the "cow path" where I slid so violently in the mud off the course and down into a ravine. I had to crawl my way back to the course in the icy mud with my fingernails and knees. It was pretty great, but Glenn Alverus said I lost about 4 minutes bathing in the cold soup. Time well spent, if you are looking to get dirty.

After the cow path and 2 mega sets of stairs, the course is fairly runnable and incredibly fun and beautiful.

During the second half of the race, I did not know how far ahead of me Pernille was. I just gave it my all. I could tell I had really improved at technical trail running since running the Hammer Trail last May.

In the 50 miler as well, 3rd place overall was taken by the one and only Pia Joan Sørensen, who ran the amazing time of 10:43:57, the only female finisher of that race. Jesper Halvorsen won the 50 miler in 9:44:21. All of the results can be seen here. Congrats to them and to everyone who took on this course! I have raced quite a lot of races and when Salomon and TIF get together to make a race, it pretty much doesn't get better.

The week before this was spent with SR in California. I had my last two PM&R interviews at UC Davis and Stanford. We managed to get in about 80 miles of trail running in 6 days. We also caught up with Jill Homer for dinner. Yep, she is just a cool as she seems.

"I then delved into my bottomless carry-on and took out my emergency salad, frozen broccoli, gluten-free soy sauce, tuna and chocolate wine. I like to have a make-shift gourmet meal ready wherever I travel. Cheers." This is awesome and you would fit right in with my family. With kids who are sensitive to gluten, dairy, and a variety of food additives, we usually travel with our own meat, black beans, salad dressing, and vegetable peeler!

Robyn! I have been so inpsired by your diet the last couple of weeks. Thank you for all of the wonderful meal ideas on your blog. I am eating almost exactly like you (mostly was to begin with) - though still working on cutting down on my chocolate - and am even going to convert my boys gradually to a diet very similar to yours. Why not be healthy? We only live once!

Thanks! I was eating pretty close to this before, so it's been interesting to go whole hog (so to speak) for a while. Dark chocolate is certainly one thing I'll be adding back!

To be clear, my husband and I are doing Whole30; my kids aren't. They still get some corn tortillas and tortilla chips, white potatoes on occasion, and some sweetened dried fruit. And a lollipop at Trader Joe's. (But come to think of it, they're actually pretty darn close!)

Tracy, love the pics of you and Rasmus...kind of a pretty boy;-)

I hate falling. I did enough of it in high and college (during cross country). Running all out to take a spill on ice or mud or around a sharp trial corner that's really dusty. It really hurt a few times. Now I just run slower. Nice job though. You definitely win some crazy points in my book (and I know you love crazy points). ;)

Your smile at the finish line is contagious. Way to go hard!

That race looks so fun! Though I would be scared to go that fast with how slippery it must have been. (And "I was scared" would have been my excuse for why I was so far behind you, if I had been in the race;))

SR's face in the second photo (the one below the Apple Store one) made me laugh out loud--what is going on there?!!