I was coaxed into running a 5k Saturday by SR and another friend. Even though there is really no pressure when you're running a race with "8 Months Pregnant" written on your back, I was nervous about getting sick, having contractions, falling, reinjuring the hip, having to urinate in public, etc. I didn't sleep half the night before, partly because of nerves, partly because of excitement, partly because we had to go to bed so early.
We both knew there was no way I'd get out of running this one, though. The three days before the race, I had run 3 miles on the treadmill each day without any pain in my hip or fatigue. It was my (probably last)chance on Saturday to show young women that the could stay in shape and keep running all the way through pregnancy.
I heard of a woman who was a few years ahead of me in medical school who ran until her delivery date. I remember thinking she had to be crazy. Ironic, I know. But I think of her now and realize she was doing what her body wanted her to do. Pregnancy is not a time to give up taking care of yourself or give up any thought of staying fit. You can potentially feel the best you've ever felt, all the while doing what's healthy for the baby. Remember this is what our bodies are meant to do! And there is no excitement like that of having a child growing inside of you. And the bigger he gets, the more amazing it becomes.

Back to the race. Here I nervously down my coffee before we leave. 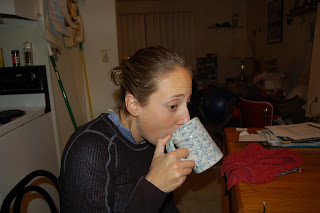 It was a very warm day for us, with temps around 30 F. I stood at the starting line with a friend who was running for fun. She told me she was going for 28 minutes. I told her I'd be happy to get that. She did give me a look like "Yeah, good luck getting that 8 months pregnant." Anyway, I thought we'd run together, but about 30 seconds into the race, I realized I could go a lot faster. I took off passing people, getting a mixture of encouraging comments and pissed off looks as they saw the shirt. My first mile was in 9 minutes, but I kept feeling better as I went: I ran the second in just over 8 minutes and the last in just under 8 minutes, coming in at around 26 minutes. It felt so amazingly good to run fast outside again.
I saw SR just before the finish. He had gotten second, losing first by just one second to a really fast high school boy. He was disappointed, but we were both so happy to be able to run a race together again.
Try not to focus too much on the camel toe. 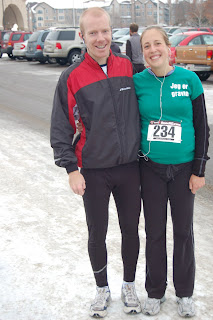 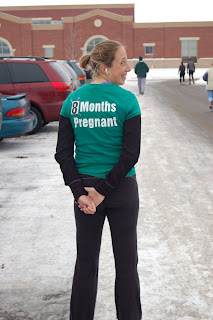 So life has been good. Other than exercising and working a lot, I have been basically living the life of a hibernating bear, only I'm doing the eating and sleeping all at once. It truly amazes me how much food and sleep I need. If I don't sleep at least 9 hours, I feel miserable.
Honestly, I wish the baby would come now, but in reality we will probably need to wait another 5 weeks. In the meantime, I'll keep up the exercising as long as I can and look forward to my nightly pregnant lady rub from SR.
Running Song of the Day: These Boots Are Made For Walkin' by Geri Halliwell (yes, the Spice Girl singing on the Rugrats in Paris soundtrack)

Trust me, you do not want your baby to come at 35 weeks!! My daughter was born at 35 1/2 weeks (my water broke at 34 1/2 weeks and I was hospitalized until her birth, at which time an emergency c-section showed I have a septate uterus no one knew about).She had to spend 20 days in the NICU, but that was only because she had feeding problems. Luckily her lungs were mature. But it was the most depressing 20 days of my life. So keep that baby in as long as you can!!!

I'm snickering about you beating your friend! I can't believe how fast you two are, good for you! You look fabulous, as well.

You don't know me but I was googleing running a race at 7 months prego and your blog showed up. I've been debating and debating wether to sign up for the last leg of a triatholon in July and I might be 7 or 8 months prego. Everyone I know except the girls I run with are freaking out and telling me I can't do it. I run every day now and I WILL through my pregnancy despite what anybody says. Thanks for your post cuz now I'm going to sign up for the RACE!

Hi, I'm only 3.5 months pregnant and was having doubts about racing (well, most people seem to think it's crazy) but I'm going to sign up too after reading your blog. Your baby is adorable and doesn't seem any worse for it so hopefully mine won't be either. It's probably just my imagination but I actually feel like he's happier when I'm running - maybe because I'm relaxed and happy instead of stressed out and anxious at work...