The weekend got off to a good start when I learned that my research is going to be published! It's a great journal, so I'm elated. I should be working on the revisions right now, but I've got all night for that...

Friday night, we took off for Minneapolis. Just me and the little lifted Lorax (SR was away at his 80 hour ER shift).

It was hard to tear the little guy away from his newspaper... 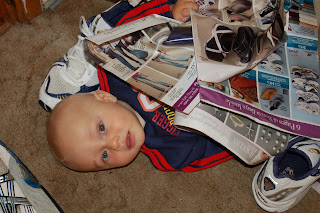 Note three generations of one running shoe (SR's) in the above photo.

We arrived at my sister's around 7:30 pm. She and her boyfriend, The Artist, just moved to an apartment 2 blocks from Lake Calhoun. The most exciting thing about Lake Calhoun (in my mind) is the 3.5 mile running trail around it. Back to that later.

That night, we went out to a "raw" vegan restaurant called Ecopolitan. I loved it. For someone who doesn't eat meat, hates high fructose corn syrup and can't stomach dairy, it is a rare treat to be able to order anything on the menu. I'm sure you're all familiar with what raw food is. But what fascinates me the most about it is how the philosophy of what food should be has changed in the United States in since the 1970's when Earl Butz was Secretary of Agriculture under Nixon and head of the USDA. He believed food should be cheap and mass produced so every American could afford it and spend their money on other things. A noble goal, but he is largely responsible for the rise of high fructose corn syrup and unhealthy corn-fed animals. Anyway, with raw food, the pendulum has swung as far as it can in the other direction. According to raw food lovers food should be healthy, make you feel good (hence the no cooking) and no animals should be involved (money and time are no object). It should probably be added to the list of things white people like (along with cloth diapers :)).

The Artist ordered Spicy Thai Noodles. The "noodles" are uncooked zucchini. Sorry about the small picture.

The Lorax had blended banana. Then he added "Kuh" to his armamentarium of words (comprised currently of "dadada" "mamama" and "yiyiyiyi"), thus contributing to the erudite conversation.

There is only one bed in my sister's apartment, so The Lorax and I went to a nearby hotel. To fight a small diaper rash, I let The Lorax just be The Lorax. In other words, he slept naked from the waist down. His little hiny got so cold that we didn't get a great night's sleep. We also both woke up pretty wet. Needless to say, the sheets were wet, too. But they hopefully change those after every guest, right?

The next day, Sealegs Sister (SLS) made mini crepes and tofu scrambler. Then she enjoyed being Auntie SLS. 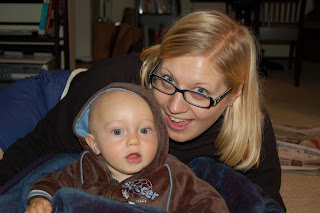 I sat and watched The Artist (or the self-proclaimed "world's 22nd best 1/2 Filipino") make still frames for a Canadian hockey commercial. He is no doubt a talented guy and is starting to get lots of recognition for his work.

Then The Lorax and I went on our epic run: 4 loops around Lake Calhoun. It was intermittently raining, so he got quite wet. For some reason, it didn't seem to bother him. He is a little bothered by the pneumonia he has now, though (just kidding).

When I returned, I learned that The Artist had proposed to Sealegs Sister! 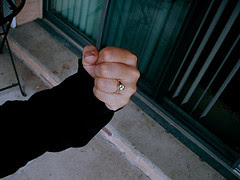 I am so happy for them. I could not imagine my sister finding a better match in life. 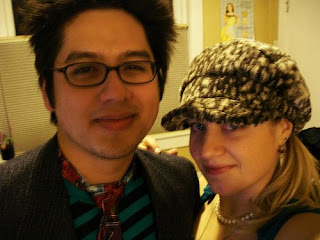 Song of The Day: Melt Your Heart by Jenny Lewis & The Watson Twins
Posted by sea legs girl at 21:51

I'm hoping you left a BIG tip for the cleaning lady when you left the hotel! I used to be one and never appreciated being left with a peed on bed to clean up.

What a fun trip! So glad for SLS, he looks like an artist, btw.

How's the rash??? My niece used to get one if she had acidic food, like tomatoes....and that included my sister eating them and then nursing.

run forrest! Where have you been??? It's so good to hear from you! By the time we left, the bed was pretty much dry and urine is sterile, so I figured it's not such a big deal. That being said, I can't claim to enjoy touching things that have been peed on and leaving tips for the cleaning staff is really cool thing to do (I wish I would have been cool).

lisa, the rash is all gone. There's nothing a little nudity can't cure. And running in the rain is great, as long as it's warm.

OOh Angeline would never sleep like that.
She wails if she's naked. Even in the bath, we have to lay a wash cloth over her. Wails while being changed, etc.

Somehow I ended up with a very modest baby. ;)

Had I known you were there, we could've run together!

Congrats on the publication and to your sister. Those raw thai noodles look good -- there was a great raw place near where I used to live but I don't think I could be a full-time "raw" foodist. Sometimes cooking the heck out of my veggies is the only way I can force myself to eat them.

Heather, yeah The Lorax is not modest. He loves having a warm blowdryer blow on his, um, naked little bod when I change him. :)

Steve Q, I didn't know you were actually in The Twin Cities (I knew you were in Minn. somewhere). It would have been fun, though I would have had trouble keeping up.

Danni, I agree. I love cooking things. I could never be raw.

Just ran across your blog and have been doing research on acceptable heart rates for pregnant runners. Did you track your heart rate while you were pregnant? I've always been a runner and have always had a heart rate that runs on the high side so I'm really struggling with where set my max. Any input would be greatly appreciated. I didn't run through my first pregnancy and am very happy to be running through my second. Many thanks!

kristin,
I didn't keep track of my heartrate when I ran, but in spinning class sometimes I hit 190. Then I would start having contractions. Then I would slow down. I'm not telling you this as official medical adivice, though.

I'm so glad to hear you are running in this pregnancy. I promise it will make you feel good, provided you can avoid injury. Send me an email to sealegsgirlblog@gmail.com if you would like to chat. I'd love to hear from you!