The Bonus Jonas and How The Bois Became Le Brisbois

Last week was spent with SR's parents (Farmor and Farfar). They come to the US twice a year from Denmark to visit their grandchildren and son. I guess this might be their last visit in a while.

The week was unreal. I expected a little more stress and a lot less fun. After all, entertaining two guests and taking care of three kids is not something I fancy myself good at. Oh, and I'm definitely not, but we had so much stuff planned that perhaps it wasn't obvious.

What really made the week so great was the amazing amount of energy Farmor and Farfar put into loving their grandkids. If they got tired of sleeping in bunkbeds with them for two nights or of playing with them endlessly, they didn't let on. Something tells me that not all Danes are like this. But if they are, no wonder it's the happiest country.

And with all of this going on, step-daughter and I got very close. I learned all about The Jonas Brothers and how there is a brother that is 7 who's too young to be in the band ("The Bonus Jonas"). I know all of the good songs from High School Musical 3. And now we've got matching Adidas backpacks. I made step-daughter two cd's with all of her favorite songs. After that little project, we went out to dinner and Farfar kept saying "I think Sealegsgirl is #1 in your universe." Perhaps it's not true, but for that moment it felt like it.

Another highlight was going to Wyalusing State Park. We all hiked for hours in the cold, dark windy woods, somehow keeping our spirits up. By the end, our dogs were barking.

There was lots of eating as well. Step daughter outgrew some jeans and The Bois and SR gained 2 kgs each. A couple of new fat globules formed in the pulp of The Bois' left lower central incisor and he thus got his first tooth! And earned the name "Le Brisbois" ("the beaver" in French... okay so maybe it just means "break wood").

I'm sure SR will hate me for posting this picture, but I love it. 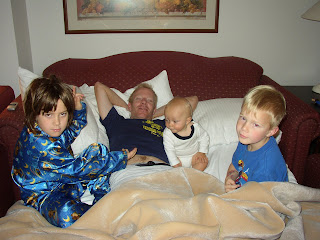 Song of The Week: Burnin' Up by The Jonas Brothers
Posted by sea legs girl at 00:45

Tell SR it's one of the best pictures he's got! :)

I love it! Could they get any cozier? Look at the Bois sitting up like a little prince.