And by "He" I mean He Pingping. That's our new nickname for The Bois. For those of you who don't know He Pingping, 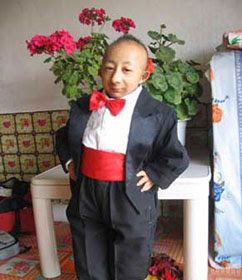 He's the shortest man in the world. SR and I are fascinated with his life, and we're in no way implying that He's like a baby. In fact, we admire He. And it's just a really cute name.

So anyway, our He Pingping is now 8 months old and has no teeth. A little while ago I saw an acquaintance at the library and she was asking if He had teeth yet. I said no and she replied "It's okay when kids are behind." She then glanced at her obviously very advanced children and smiled.

How could she imply that just because He didn't have teeth that He was behind? I challenged her to a fencing duel. She'll think twice before she calls another one of my children "behind." I handed her an extra set of equipment: jacket, plastron, breeches, glove, mask and foil that I happened to have in the baby jogger. We dressed and drew our weapons. We were in the library, so of course this was all virtually silent. She had strength and tenacity, I'll say that. But, in the end, I chased her down with my speed. Final touch and I whispered "It's okay to be behind."
"Touche!"

He Pingping, of course, also wanted to defend himself. 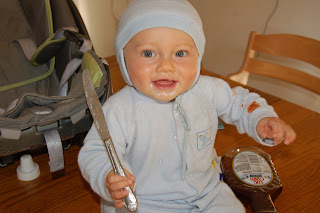 So after the fencing duel, I've been wondering whether or not getting teeth late is associated with slow development in general. I haven't found anything to indicate that. But now, He still doesn't crawl and He gets too caught up in laughing to imitate (though He does imitate drum beats we make consistently). And then, I realized I wasn't feeding him nearly enough. I fed him breast milk and one bottle of baby food or some applesauce with rice cereal a day. The guide to your child's first year I'm reading suggests a much more varied and high calorie diet. I mentioned this to SR and he decided to make up for this all in one day...

He prepared himself and He Pingping a typical Danish meal of open-faced sandwiches on hard rye bread. He Pingping was thus fed braunschweiger, fish eggs and tuna fish on rye all in one sitting. I figured he must know what he was doing having had two kids already (though nervous nelly that I am, I was begging him to stop). Suffice it to say that 10 minutes after the feast, he threw up what SR called a long "arm" of vomit all over himself and the table. Of course there was no harm done. But He Ping Ping is not ready to be a gourmand yet, either. 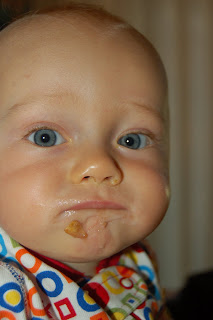 Well, we're off on a 1 week vacation with the step-kids and SR's parents. I apologize in advance if I don't have time to write a post! I'll do my best, though.

I've actually been doing some speed work for the 10k we're running with SR's dad this weekend. I've never run a 10k before, so I'm pretty excited.

Running Song of The Day: This is The Life by Amy MacDonald
Posted by sea legs girl at 03:53

"He" (pronounced somewhat like "huh") is a family name, "Pingping" a given name; you're being strangely formal with your baby. Don't get wrapped up in developmental milestones, as he'll reach them all eventually - you've got enough to worry about without that.

As I looked up info on the world's shortest man, I saw Sandy Allen, the world's tallest woman died. I knew her a little. I met her once when she was a tour guide at Ripley's Believe-it-or-not Odditorium, then when she was the mayor's secretary in Indianapolis, then as design students at Purdue made clothes for her. She was perfectly average until a teenager - so development sometimes takes odd turns.

I sometimes wonder if my daughter is behind too. She's past seven months now and showing NO interest whatsoever in crawling. Could you email the info on how much babies should be getting (calorie wise)?

Hey, you may find that Ellyn Satter's book, "Child of Mine", is a good resource for this stuff. Admittedly, I only know you from your writing here, but you seem to have some vigilance issues for yourself around food, so having some outside guidance for feeding the babe could help make things a little less stressful. Satter's a nutritionist (serious research creds), and is just a wonderful voice of reason and her book is not one of those that will make you worry about whether the boy eats enough dinner and will not be the guilt-inducer that so many parenting books seem to be.

Just wanted to toss that book out, as I know well that this parenting gig is hard as hell, and the food thing in particular is one of the biggest challenges.

Good luck, hang in there.

Every child develops at their own rate. My daughter started getting teeth early (around 4 months) and had all her baby teeth (molars and everything) by 18 months. But she also didn't crawl until around 10-11 months and didn't take her first step until 15 months. She's a totally normal 4 1/2-year-old now.

In comparison, my son started crawling around 7-8 months and was walking at a year. But he was really slow to get his teeth, and still hasn't gotten one of his front top teeth. The dentist thinks he may have been born without this particular baby tooth, and she says it's not a big deal. They're going to do an x-ray in February if it's still not in (there is nothing but a gap there).

But otherwise, he is a perfectly normal 2 1/2-year-old.

Please don't compare The Bois to other children. It's not fair to him. I have known some people whose babies didn't get their first tooth until they were a year old. Think of the bright side -- he still has that ADORABLE toothy grin that I miss in my kids! Plus, he can't bite you with teeth yet. Trust me, it hurts when they do!!! ;-)

The Bois is very cute, and I can't believe anyone would tell you your kid is "behind" (other than a pediatrician). You should have showed her your behind.

Good luck on your 10k (torture distance!) and have a nice trip.

Don't worry about it. My kids were all "late" getting their teeth. They're all in now and so far, no cavities. I've heard somewhere that doctors are no longer using crawling as a milestone because not every child even does it. Some will go straight from sitting to standing to walking. I had to laugh at the menu SR fed him. Just start adding more fruits & veggies, maybe try him with some yogurt ect. He's fine, I'm sure.

Meh, when a child reaches their developmental milestones as an infant has nothing to do with their intelligence or how advanced they are in childhood or life.

It is just an individual child and may be genetic.
So far Angeline is hitting things very early, not because she's some sort of super genius (I mean, of course I think she is, but that's not related) but because her father did the same thing.

Everything I've read said as long as a child is reaching the minimum milestones (pediatrician will tell you), when a child does a certain thing means nothing. So saying advanced or behind seems weird to me.

It never ceases to amaze me, the inappropriate comments people make about other people's children.

I took care of a little one who didn't have a single tooth or hair on her head until she was a year old.
Her mom and I would just look at her and ask each other "Should we be concerned? Ya think she'll ever have hair? Or teeth?"

Her fabulous Czechoslovakian pediatrician would just look at us sideways and ignore us when we asked whether or not we should be concerned. We took it as a no, and it turns out, Little M now has an absolutely insane head of hair, and between her 14 and 18th month all of her teeth showed up, seemingly overnight. She is gorgeous, brilliant, and kind. :)

Miss N doesn't have teeth yet either, she's 7.5 mo. I didn't get teeth until just after 8 months. All I've read is that it's genetic, not a sign of slow development. (Of course I've obsessively looked it up as my friend's baby of the same age already has 6 teeth!) And don't worry about him not crawling. I didn't crawl until after I walked. So many kids skip it entirely. What I've noticed from meeting other moms is that babies are SO different.

ditto what everyone else has already said about those silly milestones and that woman's poor choice of words.

With my first son, who's fontanelle was almost closed completely, his pediatrician said he'll likley be an idiot. Just like that. Scared the shit out of me. Alex was the smartest kid "on the block" and far ahead any scales, reading and writing in 2 languages by the age of 4, and doing math of 10th grade in 6th. Well, may be that's how he became lazy. Now, of course, he is a bum of life so to speak, but it has nothing to do with his head developement. Stephen, by all the general scales, was delayed. Late theeth, late talking, late walking...I, myself, thought he is "below average". He picked up last year and is rounding up nicely. Not ahead, but surely right where he has to be. Go figure.
But those nasty folks who comment - those need to go for a run. May be their negative energy will find an outlet:)
Good times at 10k! Man, you are fast!