Well, we made it. And thank goodness they let me take this as a carry-on... Although I felt badly that we put him through such a long journey. We didn't reserve a seat for him, but ended up with an open one next to us on all three flights. He didn't cry at all and slept on every flight. He played and smiled with everyone who paid attention to him. But he did end up with terrible jet lag and spiking fevers the first two days we were here. 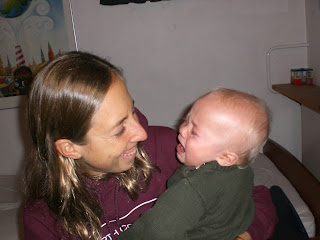 There was also a rather embarrassing moment on the flight. You see, I'm used to breastfeeding and sleeping at the same time when we're in bed. This scenario happened on the plane (without my full consciousness) and I didn't realize I had a completely exposed boob until I looked over at the young German guy next to me who was staring at my chest with eyes the size of teacups. (no, I don't have a photo of that)


We've been here a week now, living out of SR's parents' basement. Without them, it is frightening to think of how much Danish kroner we would have spent.

Yesterday we found our apartment in Næstved. It's a 3 bedroom with wood floors, high ceilings and big windows in the center of the historic downtown. It was a really lucky find (and quite cheap). We looked everywhere and apartments were only available to buy. But then we ran across a bank that rented out apartments.

Otherwise, we're still running, just not as much as usual. My legs were incredibly tired with the jet lag. And even now our long runs are shorter because we're just tired from restless sleep, three family Christmas gatherings and more walking around. We're running a race on Saturday (a 5 miler). I'm scared of how poorly I will fare. How out of shape can one possibly become in 1 week?

Also, the weather here is, well, wet. I was used to the upper midwest USA's cold. But though it's not even below freezing here, the air is so dense with moisture that the cold seeps right through your skin. Nearly every day my feet go numb.

But it's beautiful running. We've run in various ancient forests filled with trails and even had a run by the ocean. 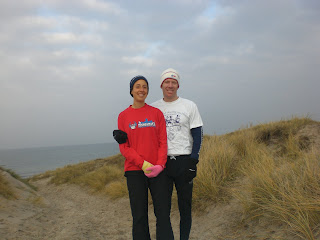 The paths are often lined with a plant called snebær. On the rare occasions that the sun is shining, the flowers look like enormous dew drops. 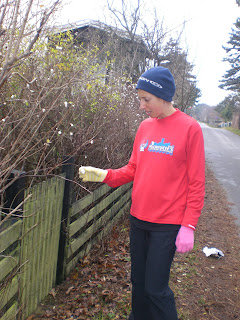 Rest up so you don't get sick too! I hope the kiddo feels better. I wouldn't worry about the race. Especially since you'll probably do just fine ;)

I will check out that song. I am desperate for new running songs. My playlist is stale and I have a half marathon this weekend (you want to talk out-of-shape?). I'd appreciate any other suggestions.

Glad you made it safe there! I missed your posts:) Funny about the plane/boob insident, but oh, well, the dude will get over it. It's natural. Have fun at your first race in Denmark, don't worry about speed, "feel" the new grounds and size up the competition!

Just to make you feel better about the weather: the windchill here right now is -1F. And not an exposed boob in sight!

Thank Goodness, you made it! Poor Bois. I hope he acclimates soon! Don't worry about your race, at least you are getting out there and running. I bet you make some new friends, too.