One nice thing about Denmark is that races start at reasonable times. Today's race began at 10:00 am. I've never understood why Americans need to get up so early on the weekend to race. Anyway.

We woke up after a delightful sleep and had a little breakfast. I ate oatmeal. We ran about 3 miles to the race start. The race was next to Bagsværd Sø (sø means lake). There is a beautiful hilly forest with trails all around the lake.

Danes all wear expensive running gear. If you show up in cotton, you're sure to get strange looks. They also all wear spandex-type pants. I felt out of place in my six year old baggy black pants from The Express and my big turquoise mittens. There were, needless to say, quite a few women with serious running gear on.

I thought to mysef Jeg er helt vildt nervøs (I'm completely crazy-nervous). I figured I'd be third woman. This was a small race with about 70 people.

We looked at the confusing route on a map and then warmed up on it a bit. SR stopped in front of a mud wall and then began to fumble up it. "This is the last hill." I laughed and then realized he wasn't joking. I started up it and slipped all over the place in my racing flats. Why didn't I wear my trail shoes? Well, I accidentally packed them in the container that's coming in a couple of weeks.

This was an 8.2 km race. At the start line they said that there would be prizes for the first three men and the first woman. I never thought of Denmark as a chauvanist country. Quite the contrary. I should say there were more men than women at the race.

I started out in the middle of the pack and became that annoying person who passes lots of people right at the start. One woman gave me a surprised look when I passed her so quickly. As it turns out, that woman always wins the races around here.

So the race was up and down muddy, wet trails in the woods. And we ran around 4 circles, each about 1k longer than the one before. It was a great set-up. I was surprised to be able to see SR for the first two laps. And I was leading the women by at least a minute at the half-way point. I didn't keep track of time. I don't know my km splits. I just ran as fast as I could with a pretty good sense of how much race was ahead of me.

I stayed with the same men the whole race. I enjoyed listening to "Journey of the Featherless" by Cloud Cult over and over. In short races, I've made a habit of only listening to one song. SR and I were the only ones with MP3's/ipods.

It was a beautiful dark, cloudy, wet morning. And it felt so good to run fast. 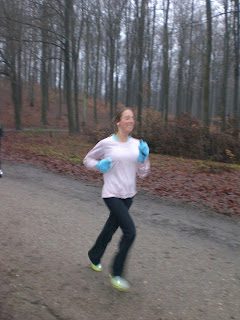 With less than 1km left, before the final mud wall/hill, I saw SR win. I figured if I could avoid falling while scaling the wet mud, I'd be the first woman. Breathless, I survived the wall and ran downhill to the finish-line. My time was just over 34 minutes. So that's about 6:40 min miles and 4:10 min kms. 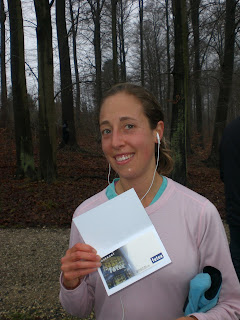 I talked with the second place woman afterwards, who came in at 36 minutes. She was really nice and lives in the area. She made fun of me for not knowing my exact time. Part of me felt bad about coming in and crashing the party and winning. But then again, as SR said later, I didn't feel that bad. It was a lot of fun, after all, for us both to win. 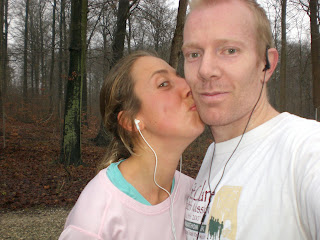 I loved meeting people afterwards and trying to speak Danish with them. It turned out the race director has a sister who lives in the very same town we just moved from in the Midwest. It was an extreme small-world moment when he said where his sister lived. We hadn't met her though.

I'm so excited about races in Denmark now. Our next one will be a marathon in January. I'm guessing that it'll be a bit tougher for us both to win that one. But I love the challenge.

Holly cow! Woman, that's rocking! Both of you!

Congrats on your successful move, as well as your first race and win in Denmark. Sounds like you all have arrived with a bang!

Already making your mark in Denmark I see. Great job!