I am the fastest female runner in the world

Or something like that. Okay, perhpas Devon Crosby-Helms or Helen Lavin could still beat me in an ultra (sometimes I like name dropping with the ultra stars to make my blog seem important).

BUT what a weekend. And I had such a busy week, that I haven't had a moment to write about it.

First a run next to Bagsværd Sø on Saturday. It's an 8.2 k race, or just over 5 miles. SR and I ran this one together last year and got some nice money prizes. This year they decided not to give prizes to the winners. And I told myself to use it just as a training run since I was going to race a bigger race the next day. With quite a bit less effort than last year, I ran just 16 seconds slower and had a time of 35.15. And won! SR also won with a time of 30.07.

The next day was the local Herlufsholmløbet 10k. SR didn't run this one, but offered to watch the kids. I had run the exact same race and route a month ago, so I was excited to see if the interval and tempo training had payed off. After the first 1k, I could tell it was much easier to maintain a fast tempo. I ran the first 5k in 20:30 and finished with a time of 42:44. This was over a minute faster than last month!! Good enough for 1st female and 14th best female time since the race was started in 1989. Of couse, had Mette been there, I would have gotten second. But I couldn't help basking in my glory and being encouraged by how good it felt and how much fun it was.

Here are some pics from the sidelines on Sunday. 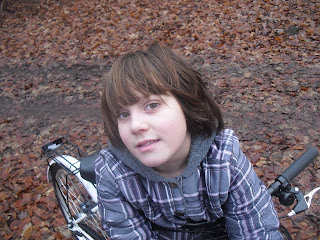 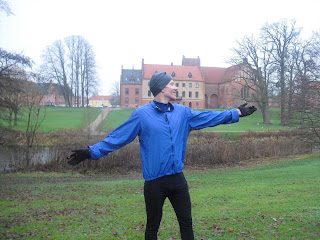 And SR quickly gets into position to snap this one: 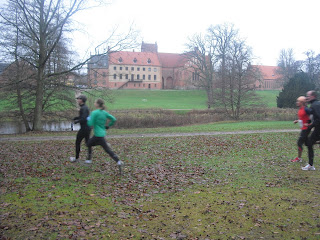 Since then I have had an extremely stressful week of little sleep trying to get the Phd organized. Oh and I had that big oral test on Wednesday in Danish Social Medicine, which I happily passed. But based on the amount of Celine Dion songs I downloaded yesterday, one almost has to deduce that I have gone insane.

But the best running songs from the weekend were some classics: Adam by Viro and I thought you were my boyfriend by The Magnetic Fields
Posted by sea legs girl at 17:02

awesome racing and nice job on the test!

The fastest female runner in the world turned out to have testicular feminization; be glad you're not her (or him).

Lucero's "The Devil and Maggie Cascarillo" is my new fave, once I got past the singer's odd voice. A bit like early Springsteen.

Steve, one has to wonder with my speed if I suffer from something similar to Caster Semenya. Okay, I should stop. I feel bad even making a joke about it! What a terrible situation to be in. I found "Even Heroes have to die" by Ted Leo & The Pharmacists for free on box.net. No luck with free Lucero. Thanks!

On race day it only matters who shows up! You won - congrats!! You guys have loads of races there... fun stuff. So, with Chippewa cancelled are you looking for a race in April? Come to Ireland to run the Connemamra ultra - I'll be home for my sister's wedding so I get to fit in this fantastic race too!