The secret of the winter runner

The snow is falling sideways again today. Today I had an 8 mile tempo run on my schedule. After 1.2 miles, I was struggling with everything I had to keep my pace under 8 min miles (5 min km) while running uphill into the snowy headwind. I can't help but suspect that the conditions will be better again one day.

The fact that I lost my research salary last week has been harder to deal with than I expected. Instead of enjoying free time, I find myself scrambling to find ways I can get a full-time salary next month. I think that if I get an acceptance as a ph.d. student at the University of Copenhagen, it will make things easier. But anyway, I woke up at 5:30 Saturday so I could have a couple hours to work on applications to private funds in peace. By the time 12:30 rolled around, and SR returned from dropping off Natali at a birthday party, I was on the edge of a breakdown. I started yelling at SR for no reason and then started throwing some of The Lorax's favorite possessions (good thing he was taking a nap). What on earth was going on? I started crying. I went for a nice swim and it helped calm me down, if only temporarily.

Sunday morning, I woke up again at 5:30, unable to sleep. I ate the breakfast of an ultramarathoner. But the problem with eating like one is that you had better also run like one...

SR and I drove with the kids to his parents' house in Bagsværd. It was a day for a long run together. We started running at 2 pm. There was snow everywhere. We took it easy running in the snow the first two hours. 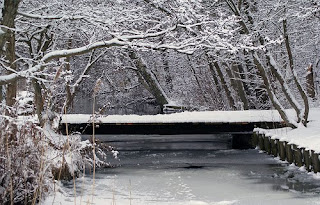 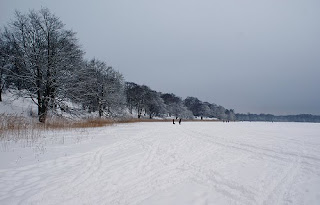 (I stole these from Tina and Ole who were out in Bagsværd at the same time. My camera sadly ran out of batteries)

We went back to his parents' to refuel. I only had a couple sips of water. I was way ahead on my calories for the week, so I didn't figure I needed any more to continue. We felt renewed as we went out again, this time running on bike paths without much snow. It is so easy to be in love with SR on our runs together. Though there was one point when he told me he was amazed I had made it so long in life without any psychiatric medicines or diagnoses. Well, one could easily take this as an insult, but honestly, it is running that keeps me happy and sane (or at least somewhat).

After 2.5 hours we decided to run alone at our own pace. I stayed on a bike path as night fell. The snow on the dark tree branches glowed as I ran effortlessly under them. After running on snow all day, I felt like I was racing downhill just by being on a dry, level, hard path.

There is something amazing about running in the snowy cold for so long. I felt such a happy warmth inside of me. I listened to The Great Lakes Singer's Your Rocky Spine and cried as I thought of the beautiful places I have been and run in my life. And the experience of the Trans-Alpine Run. A while down the road, as it became completely dark, I listened to Slow Show by The National and the beautiful lyrics "You know I dreamed about you for 29 years before I saw you" brought me to tears again.

God, life was good. Only a fool dwells on the negative. If you don't believe me, become a runner. 22 miles down and it felt like almost nothing.

So it is now two days later. A tempo run with pace of less than 8 minutes per mile for 8 miles was probably an unrealistic goal in a snowstorm. But I pushed through the snowbanks and the blistering wind. I don't really know why. I actually yelled out at one point in pain. That was a first. When I turned around, the snow became ice pellets and the wind picked up. I could feel a small corneal abrasion developing in my right eye from the wind and I could see almost nothing out of it as it was tearing so much (I imagined coming into my own department explaining the injury). I just kept pushing, pushing pushing. And came though 8 miles at a time of 63:47. Yes!!! I did it. 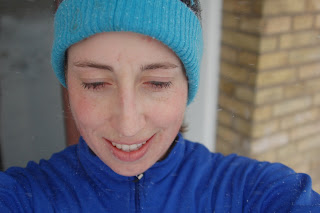 And as I was writing this blog post, a woman came to the door and delivered this: 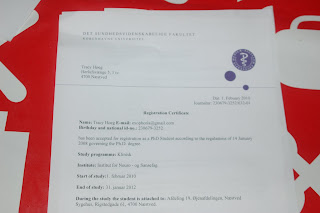 It's an acceptance letter into the Ph.D. program at the University of Copenhagen. :) Again, I did it!!!!
Posted by sea legs girl at 13:25

Hi SeaLegsGirl, I have been reading and really enjoying your blog for couple months now. Sometimes I ask myself "what the heck is she doing?" but who does not right?:) I am a runner myself (maybe we will see each other at Eco-Trail de Paris 2011, what do you say?:), although not a mom yet. As you wrote in your post-"I did it" after successfully completing 8mile tempo and getting into PhD program...well I am not surprised. Because it seems you can do whatever- being a great mom, wife, runner...I am happy for you (although maybe just a little little little jealous:))

Congrats on getting into Copenhagen U! A PhD program can lead to years of added stress; just what you need ;)

Well done! You are the best!

I also love that Great Lakes *Swimmers song! Does that mean you got my mix (maybe I wrote it wrong on the track listing)?

I think this is one of my favourite posts since you started writing this blog! What you describe feels so close to home too (the home of a jobless runner, that is!).

Very happy that you got accepted in the PhD programme. Now that this is out of the way, enjoy the free time while you have it!

Very in tune with what I've been going through and written about - and how running is the only thing that provides sanity, when a shrink is needed:) We'll make it, dear. We always do.

Wow girl. That is so awesome. I got goosebumps at the very end. So pleased that blessings are coming your way. :)

Congratulations!! A fantasstic run followed by even better news. You day couldn't have gotten any better!

You don't half fit a lot into your posts!

I felt the same way running Saturday night... no need for and therapy (or diagnosis!) when you can run. I love that SR told you that - and better still your reaction!

Congrats on the PhD... I did suspect you would not be "happily unemployed" for long :)

Thank you for all of these comments. I have been thinking about them all day.

mmmonyka, I hope we DO see each other at Eco-Trail de Paris. What a dream that would be!! Please tell me which quarter you live in in Paris... I miss it sometimes :) I can be a little jealous too.

SteveQ, thanks for the perspective :)

Emily, Oh. I am an idiot for not writing you back. I love the cd! And the first answer is Pierre, South Dakota.

Marie-Aline, well, I guess the pressure is on for the next posts. I am so glad to hear when I write something that strikes a chord with someone!

And Olga, likewise. Great line "we'll make it dear, we always do!" So true.

Abbie, you're still around! I've missed you!

Helen, figured you could relate to running as psychiatric treatment, not that you would need any :).

My godson just got his acceptance letter for PhD studies (anthropology) at UW Madison today.

BTW, I'm going through some old music, as one can tell from my latest post. Great song for running: Robyn Hitchcock's "Balloon Man."

Thanks, SteveQ. I love Robyn Hitchcock, but I don't remember Balloon Man.

Hope you're doing alright, Sea Legs. Your last month or so of posts have been kind of edgy, unsettled. Thinking of you!