Everything sounds better, or perhaps just a little naughty, with the adjective Swedish. Even tissue. I don't really know why a sign for the company Swedish Tissue outside of Jönköping made me laugh. But let's just say that when I went to their website, I wasn't surprised that their products are made of exclusively "virgin pulp".

So I had hoped I would be able to say I had given birth in Sweden. A Swedish birth sounds almost as good as a Swedish massage or even Swedish tissue. But then again, there might have been some linguistic problems and we may have felt compelled by the spur of the moment to give our son a Swedish name, like Hjalmar. Plus we didn't have a baby car seat for the 6 hour drive home to Denmark (though there was that baby seat on the bike, attached to the back of our car. Those who have been reading this blog since 2008 might actually believe we would do this given the bike trailer incidentwith The Lorax. - I can't actually link to the real post since I can see I erased it!).

Instead, we simply had 6 days of vacation in Sweden with 13 other members of SR's family. We all stayed in one beautiful cottage in Rimforsa
Vis stort korton a lake, just north of Vimmerby, the home of Astrid Lindgren.

Piccola Pinecone had written to me a few days before we left, saying that a trip to Sweden sounded much more exotic than her trip to Toronto. Though I have never been to Toronto and I have been to Sweden, I have to say she was right. This area of Sweden is unlike anything I have experienced. It is hilly farmcountry with areas of deciduous forest and many lakes. There are boulders everywhere reminiscent of a scene from The Neverending Story. And about 80% of the houses and farms are red with white trim. For being a farming community, there is a surprising amount of wealth (even the smallest of farm houses would ope their car port to reveal a shimmering new Volvo). And if I were a farm animal, I would want to graze here. Like the terrible blogger I am, I didn't take any pictures. But I have since found amazing pictures of the area by photographer. Johan Klovsljö. 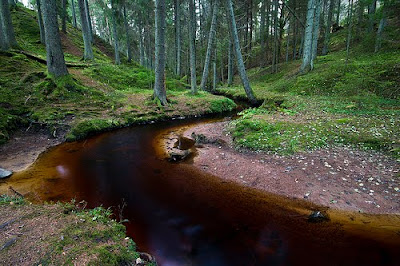 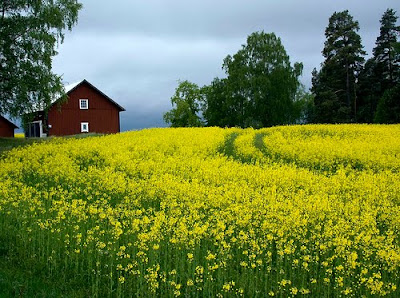 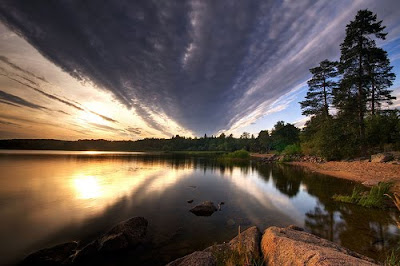 I was able to get in my morning running fix by waking up earlier than everyone else and traversing the gravel road between Rimforsa and Bersebo, which will be one of my best memories of the trip. I estimate I got in just under 50 miles of running in the six days. 37 weeks along and no pain to speak of - what is it that went right this time? It was also a really active trip with nearly everyone wanting to bike, hike, swim, play soccer, etc. My stomach issues were also quite a bit better, which made me realize at least part of my problem must have been related to my normal diet being relatively high in fiber.

My very best memory of the trip must have been taking The Lorax off of his little blue raft in the primordially cold lake we stayed at and watching him swim in his wings and vest. He was so happy and excited to swim with me in the big lake, and every little gap between his teeth showed as he threw his head back in shear joy. He had overall a wonderful trip, getting to play constantly with his four little cousins, two older, two younger. (as an aside, as much as I enjoy swimming in frigid water, I regretted not be able to wear SR's wetsuit anymore due to the fact that I had actually torn a couple of small holes in it under the belly- I feel so terrible!!).

SR and I also probably had our best moments out swimming and in the sauna, though moments alone together were too rare. It was a bit of a stressful trip for SR, having the natural role of leader of the big group. It is an odd and at times anxiety-inducing experience for everyone being in such a big group, constnatly feeling watched; even for me who didn't really try to organize anything. I just tend to be a person who likes to do peaceful things alone. One of my oddest traits is that I am uncomfortable eating in front of (or as other people might say, "with") other people. This however resulted in me losing almost 1kg and putting my 37 weeks pregnancy weight gain back between 7 and 8 kgs (though maybe the weight loss was simply due to me cutting out the soy sauce ?? :)) The 16 lbs I gained with The Lorax may thus be the exact same weight gain for pregnancy number 2.

I cried on the way home yesterday, thinking about the precious moments I had with both The Lorax and SR. These occasions are rare. I will never have another vacation like this with The Lorax - and it may be one of the first places he remembers the rest of his life. 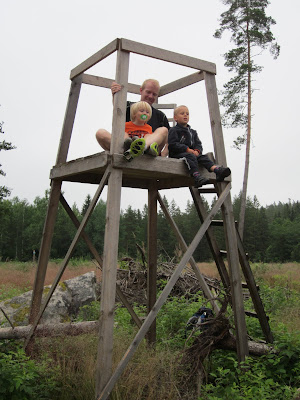 Above is proof that The Lorax still really does use a Nuk. Yep, he is almost 3½. 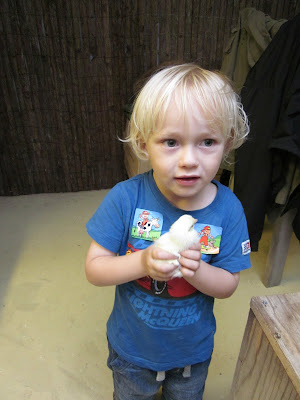 Gotta admit he looks better without one. He is REALLY holding on to that poor chick.

I remind myself daily not to count down the days to the birth, but to focus on enjoying my free time with The Lorax and SR. Besides, my maternal instinct says that this birth is not going to be early like the first. I'm just hoping it's not over 2 weeks late; I don't want to have to deal with the decision of being induced or not.
Posted by sea legs girl at 19:33

That's funny, I feel like I am not going to be early this time either. I am almost 37 weeks and don't even feel pregnant some days - rare contraction here and there but nothing that would make me think it's going to happen any time soon. I was two days early last time and that was perfect but for some reason I think I am going to be 3-6 days past my due date. Hope we're both wrong!

What a beautiful vacation spot! It sounds (and looks) idyllic. Perfect running country.

Your tissue story reminds me: the other day I walked past a woman carrying a pack of toilet paper with the brand name "Happy End." Brought a lot of images to mind.

That looks really, really beautiful and peaceful. I am jealous!

Man, do not worry about your son's pacifier use! My son is almost 3 and still uses one at bedtime. I tried to take it away one night, and it was total hell, so I gave in. I am pretty sure he won't take it to college ... .

ahhh... family, gorgeous country side, ice cold lakes, cathartic runs and a nuk... what an amazing sounding vacation. all the crucial pieces in place.

Your vacation spot looks really amazing and relaxing. Makes me want to go grab my own piece of countryside tranquility.

Avoid the spur of the moment Scandinavian naming! That's how my father ended up with the middle name Thorval (which I think came from a Sigurdson novel my grandmother was reading at the time).

Never been to Sweden, ("but I've been to Oklahoma. They tell me I was born there, but I really don't remember...") but I've been to Toronto. Toronto is a very tidy smaller, less diverse New York.

hey SLG, what a wonderful vacation after the last few months of working/researching, Nathali leaving, and just before child#2 arrives, really really pleased you had this opportunity to spend time with SR and the Lorax, albeit with lots of family around...! Best wishes in the countdown to the birth of child#2, very excited for you (even now after 37 weeks!!) :)

Umm, a couple letters of "Sigurd Olson" disappeared from my comment.

Heather - Happy End. It's almost too much!

Jacqueline- exactly, he won't bring the nuk to college. But will he bring the retainer that is still straightening his teeth :0??

Steve, I gotta admit I think Thorval is a super cool name. Though only if pronounced correctly: TORvahl. Is this how he pronounced it? Or was he too ashamed to say it out lound :D?

I find it so interesting that Pippi Longstocking is NOT the best known of Astrid Lindgren's books in Scandinavia. It must be Ronja the Robber's Daughter or however it is translated into English.

Not being Scandinavian, both he and his parents (and poor W.T. Quick, Jr.) pronounced it as if it rhymes with Orville. Bill, Jr. especially hates the name. There is no W.T. Quick, III!