It's fitting that the first win I mark in my running book is our win. This 50k relay consisted of a 13 mile technical, hilly part in the woods (which I ran) and an 18 mile double loop on wide open land (which SR ran). There were mixed, male-male and female-female teams.

The weather was a perfect47 degrees with no wind and not a cloud in the sky. We could see the flawless reflection of houses and sky on the lakes in the area. We drove quite a while to get there with step-daughter and The Bois. We had to stop for a bathroom break just before we arrived. Step-daughter is not crazy about going in the great outdoors. The Bois was the only one smart enough to wear a diaper.

Upon arrival, we saw the ultra running types warming up and chatting next to cars with license plates such as TRL RUN. As seems to be the norm with longer races, there were people from all over the US.

I made the strange decision to wear a brand new pair of trail running shoes. My left leg had been bothering me so much on Thursday that I had thought I couldn't run the race. I didn't run on Friday so I had no idea if I'd be able to run at all. I made the decision that new shoes would mean pressure on a different part of my foot and therefore potentially less pain in my leg. Plus they were cool-looking shoes. 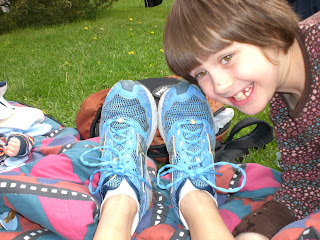 50kers and 50k relayers all took off at once.
I realized quickly that my feet were going numb. My shoes were too tight! I just kept running on the stumps thinking it would have to get better. And after the first mile it did. Amazingly, my left leg felt almost normal.

Once we ascended a steep climb into the woods, I felt like a gazelle,young and strong and free. I smiled to myself as I jumped over and around rocks and roots, sand and pine cones.

SR, step-daughter and The Bois drove around to meet me at 5 water stations! 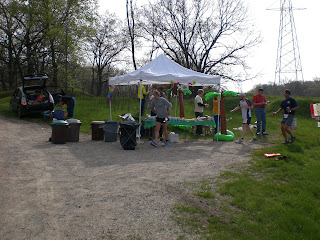 SR kept telling me I was the fourth woman and I could take it slower. 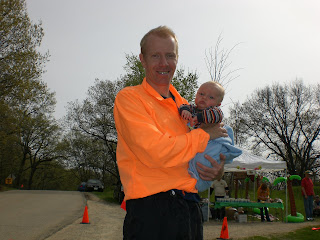 He seemed to think we would win even if I had a bad day. 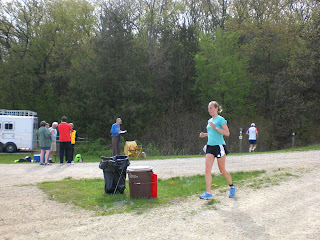 I continued to pick up speed and passed a woman and two guys after the half-way point. At the end of my leg, I ran with a guy who is a running coach in Colorado. After he joined me, he said, "I kept trying to catch up to you so I could tell you that I think you have talent for this. You are going so fast and it doesn't look like you're working at all." I smiled. Of course, if I really had talent, I'd be the first woman, but anyway... I talked about running that very trail pregnant and and he talked about overcoming ALL (acute lymphoblastic leukemia) recently. He was 51, used to be sponsored by Nike (!) and had bounced back to racing again.

We talked about getting old. I told him that stiffness was one of the wost diseases of the elderly. He looked at me and smiled. He said he told his clients to visit nursing homes and observe: "you don't have to be immobile just because you're old" he said. 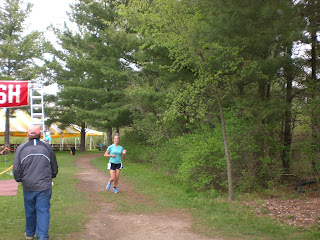 I finished as the 3rd relay woman and received The Bois reverse baton from SR. 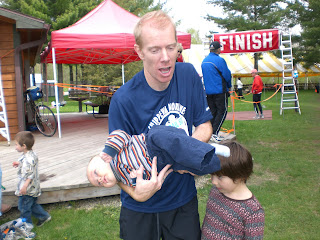 He took off after calmly explaining The Bois was in dire straights and needed some milk.

I sat with step-daughter and breastfed The Bois. Many people looked and smiled. Luckily there was no problem with the milk supply this time.


By the time SR finished the first loop, he was ahead of all the relayers and 50kers. 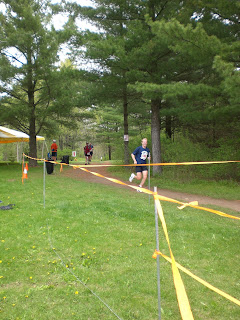 I sat and talked and played and had a great time with step-daughter. SR came in 16 minutes ahead of the next relayer. 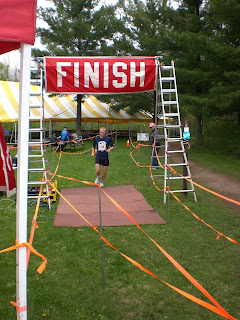 The first 50k finisher came in not too long after SR. He was a very large man, very strong, who was from Germany. It looked unreal that this Arnold Schwarzenegger-type (pre Governor days) would win, but win he did.

We had BBQ and received our awards and all went home happy.

I got my first mother's day present from step-daughter and could hardly fight back the tears. We really mean a lot to each other now. There is no turning back... and I am so happy about that.
Posted by sea legs girl at 04:59

Woohoo, guys! Way to go at the relay, and happy Mother's day to you, SLG!!!

Great job! You were a blur, SLG! I love SR's handling of The Bois in the picture, "Whooooaaaa, Wiggle Worm, take it easy!" LOL! Happy Mother's Day! It will never cease to amaze you how your relationship with your step kids grows. I always figured we'd get along, but she places a lot more importance on me that I ever thought she would need or desire. I am always stunned and flattered.

Congrats Sea Legs and SR on a relay win! The "baton transfer" photo is really amusing! You two should be proud of your successful day!

And, darling about the stepdaughter's Mother's Day gift. Happy (belated) Mother's Day to you, Sea Legs! I hope you were showered with love and support on your day!

And Happy belated Mother's Day, from one Mom to another. :-)


And even the most talented people are not always number one all the time! You definitely have talent.