Yesterday SR and I competed in a half marathon in the area. I was so nervous about it that I didn't want to say much in the blog beforehand. It was a rainy, windy, cold, muddy day. But that didn't seem to deter many people; there were over 350 participants.

We ran in a team for our hospital. I lined up next to a teammate, a competitive runner I was friends with from medical school. I have a secret long-standing goal of wanting to beat him in a race (little did I know today would be the day). SR, of course, lined up at the front. He was, after all, the winner of this event last year.


The gun went off. As I started running, I just kept thinking about how I needed to keep a 7:08 pace the whole race. That was the fastest we figured I was capable of for 13.1 miles. I ran the first mile in 6:45 and felt really good. Somehow I believed I could keep it up. The second mile was even faster. It was a straight path over mud and bridges, mud and bridges. The miles flew by at first, but then I slowed down to a more than 7 minutes per mile pace. My knee started hurting and I found myself just wanting the race to be over. The knee has really been bothering me since the ultra 3 weeks ago. But, it wasn't just my knee; I was tired, really tired.

Aren't these races supposed to be fun??? Two women passed me. I was crushed. I kept telling myself to try to enjoy the race and do my best. But I wanted to get to the end to see SR and get home to see The Bois. I put the same Nik og Jay song on over and over to put myself in a trance, trying to go the same speed until the end and not get passed by another woman.

I finished in pain, in 6th place. 3 places higher than last year! I guess I'd be lying if I said I didn't have a good time. 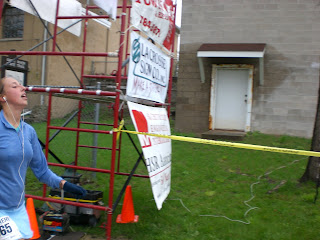 My time was a minute and a half slower this year: 1h36m on the button, but it was most likely slower conditions. I was shocked to see the male winner of the race two years ago come in right behind me.

It took me a second to remember what I was doing and where I was. I realized SR would be around there somewhere. Then I spotted him. Step son and step daughter were there, too along with their mom. They got to see their dad win the race. SR seemed happier about that fact than about actually winning the race. 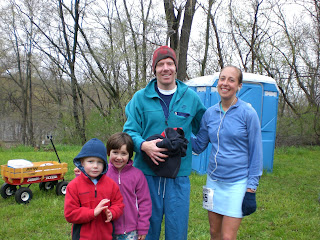 The most amazing part of the race was that someone found our camera at the end of the trail, where it had been sitting for a week (we thought we had lost it). They turned it on and saw a picture of SR, knew who he was and handed it to him.

On the way home, SR mentioned he was disappointed in both of us. His time was also a couple minutes slower than last year. He's the only person I know who would be disappointed in himself after winning such a big race. And he said he thought I could have gotten second. He just pushes both of us because he believes we can do well. And it makes us train harder. But all I knew was I was worn out; it was the ultra three weeks ago, the weight loss and, of course, The Bois. But, in the end, I'd be much more worn out if I didn't have the joy of running.

We gathered The Bois from the babysitter and went to take a nap. SR fell asleep immediately. I was so exhausted but buzzing from the race; I couldn't sleep. I just sobbed. I don't really know why.


I did think about how much I like ultras in contrast to half marathons. Today I missed the long, meandering trails through beautiful landscape. Maybe I'll focus more on ultras in the future (I've always felt I'd be more cut out for those) . We actually did just sign up for the 50k on Angel Island by San Francisco in July. Needless to say I'm excited about that.
Posted by sea legs girl at 16:51

WOW. That is an awesome race. It's very impressive then running that time 3 months Post baby is amazing. Good job. I still believe that you are pushing yourself too hard too soon, but your performance shows that your body is handling the training. I'm curious as to your fat intake. I admit that I am one that made fun of the oatmel diet, but wonder about fat intake? I've had a couple stress fractures due to higher mileage and low fat intake.I wondered how you're staying uninjured because you seems to eat little fat. I can admit I was wrong in making fun of your low calorie diet when you proved you can still run strong and fast. ( I won't admit I'm wrong in trying to get you to store the trailer for a year).
Again, congrats on a great race.

Congrats on your half! Awesome performance.

I ran my first HM and ended up with three stitches in my knee. But I finished and that was the important thing! ;-)

Thanks so much, guys! Sharprunner, good questions about the fat intake. I actually think eating fat is very important. The oatmeal diet was a temporary 2 week thing, just to see if I could lose a few pounds. I have been off it for a few days now. And I always am sure to eat very hardy the night before a long race (before a 5k it's not so important). For our pre-race dinner, I made sole with a very decadent peanut oil sauce with walnuts and some veggies and then had a few bowls of cottage cheese. I will admit that I did have one bowl of oatmeal as well, just for good measure.

I should have said I ran my first HM TODAY. Forgot that part. LOL!!! And now I am a gimp.

Nice work SLG! I don't know you, but I'm not disappointed in you. I'm pretty impressed. I waffle between whether racing fast (fast being relative to the individual runner of course) is more fun or whether ultras are more fun. Sounds like you have talent in both which is a nice place to be!

Congratulations on a tough race! While I know this isn't as fast as you have run in the past, or as fast as you might have liked to run, you should be proud of where you stand right now, shortly after your first ultra and recently becoming a mom.

I hope your recovery goes well. Rest up, going easy after working so hard is as important as working hard. :)

That is lightening fast in my book:) But, of course, me been me, I loved the thoughts in last paragraph the most:) Yes, I know, how selfish of me, but I said to a few people recently, I can see through and figure where you belong - and since I've "known" you, you belong to the crazy trail ultra junkies...what doesn't mean you want to abandon speedy half-marathons or 5k's, in fact, because you won't, you'll prosper that much better in ultras. When I still did road racing and short ones every other week to compliment long trail runs - I was on fire. Now I let go of it - and as usual, I don't know where the chicken or the egg is: I let go because I like going long and slow or I am slow because I started to be bad at fast stuff? Either way, stay at it - and keep loving it passionately. Best to R and Bois.