No, unfortunately, I'm not talking about a pet.
SR spent 48 weekend hours working at in ER in a small town an hour and a half away and I cleaned, cooked and cared for The Bois. It didn't start out that badly. I actually worked on Friday night, came home to the sitter and The Bois and I fell asleep. Saturday, I worked on a research paper and cleaned almost the entire house. We also went out for 2 1/2 hours with the baby jogger.
Okay, so Saturday was not too bad. And I love being so close to The Bois.
By Sunday, however, I found myself totally lacking inspiration. The only dialogue I had was with a 4 month old. Despite his relentless attempts at making sounds (screeching jabberwocky, docile "i i i's" and of course laughing sheep) I was getting no mental stimulation. I couldn't call SR or anyone else really because he had the cellphone and we don't have long distance from our house. I couldn't write the research article and I couldn't even blog. So I distracted myself with the babyjogger again for 2 1/2 hours. And then I made a grocery list for a Father's Day meal for SR. There is something about being a caretaker that drives one to want to cook. Normally I'm content eating oatmeal out of a box for all meals (as is well-described), but when boredom sneaks into your life, cooking is a remedy, if only temporary. Culinary artists out there will be offended, but this is just my experience. When I'm stimulated and busy at work and have SR to have fun with, I don't really care what I eat as long as it's healthy and easy to make. I also don't normally care if the house is a little messy, but when you're always in the house and have little else going on, you take pride in things like shiny floors. Of course, some people take pride in that when they have a lot going on, which is very cool, it's just not me.
On Sunday afternoon I found myself incapable of even doing the things I normally enjoy. I took The Bois out in the bike trailer and realized on the way to the grocery store (a 5-10 minute ride) that I forgot my helmet. I was so close to the store, it was pointless to go back. After The Bois screeched during our entire time at the store, we rode home. We crossed one of two intersections and something happened. I'm not exactly sure what. But I fell and looked up to see the bike and bike trailer running over me. The light turned green and The Bois was in the middle of the intersection! I had hit my head really hard, but the only feeling I had was the incredible need to move The Bois out of harm's way. As it turned out, everyone got out of their cars to help us. I was somewhat confused, but said I was fine. The Bois was just sitting there in his car seat looking around. I got back on my bike. As I rode, I started shaking and crying. I was bleeding from my face, arms, leg and back. And my head was throbbing. I'm never forgetting my helmet again.
SR returned and we had a good night. A really good recipe did come out of the domestication. As a preface I will say that I was sick of us purchasing expensive clif and power bars and having the waste of the wrappers. Here is my suggested alternative (which is less sweat and probably healthier):
Energy Bars
2 and 2/3 cups rye oats
1/3 cup flax seed meal
2 medium bananas, mashed
1/3 cup apple sauce
1/2 cup dried cranberries
2/3 cup chopped pecans & walnuts
some cinnamon
1 tablespoon or so of honey
1 tablespoon or so of sugar free maple syrup
1 tablespoon black strap molasses
1 egg
Instructions: mix the dry stuff together. Then put the wet stuff in. Mix it really well. Grease a cookie sheet. Flatten mix onto cookie sheet so it's about 1/3 inch thick, then cut it into bars with a knife.
Cook for 15-20 minutes at 350 deg F.
This makes like 10 bars.
(Obviously lots of room to change things according to your taste)
And they're not for everyone... 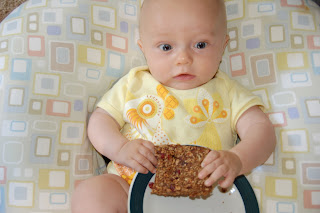 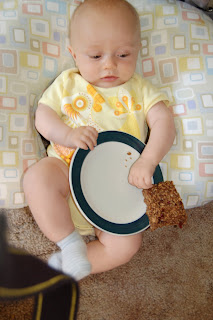 Running Song of The Day: Gammel Kongevej by Szhirley
Posted by sea legs girl at 16:08

Okay, you've finally got a running song of the day I've never heard.

Last time I thought about making my own ClifBars, I made a Linzer Torte instead and spent a day in a chocolate/raspberry delirium.

Oh, My. Would you ***please*** reconsider taking the Bois out in the bike trailer? Both of you could have been hurt or killed. What did you end up making for SR? LOL, you didn't say, unless I missed it. Energy bars? Hee Hee. You sounded so despondent about staying home over the weekend. Enjoy the personal one on one time with the Bois, these days don't last forever.

Forgot....where is the chocolate in these energy bars???? LOL!

That is a freaked out accident that made me very scary, with the middle-of-the-road thing...helmet or not, there is a reason I am petrified of biking, so I won't give any thoughts on that, i am just scared...
I can see you restless so well:) I'd do the same.
Boise looks very beautiful.

Not that it's any of my business, but an accident like the one you had on the bike could have occurred whether the Bois was 4 months or 4 years. There are just risks associated with everything we do. You could have been jogging, tripped and the same thing happen. (I hope that made sense) Just like a car, I'm sure many new moms can say that there was a time where they almost got in a car accident with their child. Hope your helmet will help in the future... but hopefully there won't be a future fall. :)

I'm so glad that everyone is alright! What a very scary few moments.