I had no idea I could do that!

Many of you have been kind enough to ask how I'm feeling and how my pregnancy symptoms are. I think the best way I can answer this is by saying I really felt like running fast today. I have never tried speedwork while pregnant. I never considered it during my first pregnancy (because I had never considered it UNpregnant) and this pregnancy, I have felt like such crap all along that regular running at a slow pace was enough. But I finally feel different.

I have also had three one hour spinning sessions with my heart rate at or around 90% max, so I thought, if I can do it while spinning, why can't I raise my pulse the same way, doing what I love most?

I decided to a do an 8 mile tempo run - with the goal of simply staying under 8 min. per mile pace. It seemed reasonable, but thought it might be tough since that is the pace I had run the OUC Half Marathon at just 6 weeks pregnant. Well, after about 2 miles, I realized that goal would not be difficult to achieve at all. I kept dipping below 7 min/mile pace and seriously had to hold myself back. I felt awesome! After 4 miles, I had to take a pee break and noticed my pelvic area was bothering me. But it was that same gas feeling I often get. It was hard to not get a little worried, but I have also had stomach issues the last couple of days and have them basically every time I run fast when not pregnant. And I felt so great otherwise, that I couldn't stop.

I fear that some women will read this and think I am simply bragging. But let's be honest, it's not really that fast. I simply mention it because I am no longer scared. I have thought a lot about Stefanie's blog and Kate's blog. They documented so well all of their fast training sessions and their healthy pregnancies and I am really indebted to them. I don't think I would have run so fast today had it not been for them. I only hope that I can help to put some other pregnant runners at ease when they are worried about racing or training with a little speedwork while pregnant.

Now all of you women out there who think I am crazy and Stefanie is crazy and Kate is crazy, I want to hear from you. I want to hear why! I don't want to exist in a bubble of "confirmation bias" as one anonymous reader put it. I want the truth about running in pregancy to come out - I have exhaused every nook and cranny I have found. If ANYONE has evidence that speedwork in pregnancy is dangerous, speak up. (you are also allowed to speak up if you don't think it's dangerous)

And since you are oh, so tempted not to believe me, here is a runner's proof: 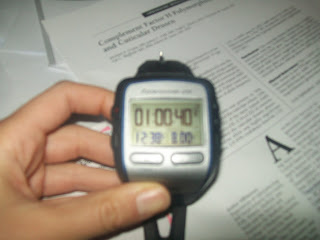 And, if you take a look at my current reading material, you'll understand why I get so excited by talking about running - "Complement Factor H Polymorphism p.Tyr402His and Cuticular Drusen".(if anyone finds this blog by searching for that, I do apologize, but send me an email - because we must be researching the same thing!)

Running song of the day (should I really admit it?): In my Head by Jason Derulo - when it comes to running fast, it's all about whatever works!
Posted by sea legs girl at 18:08

So, I guess since you made a big deal out of my running at that pace, I have to make a big deal about your doing it too.

Don't feel like you're bragging about your paces, it's often the only indicator of change, either slowing or speeding. Your readers won't ever know the difference if you don't tell them the pace. :)

Ha ha, Steve. I forgot to mention that in my post. Trust me; I thought about the fact that I could have actually kept up with you - at least for the first 8 miles. Thanks for the woo-hoo.

The most amazing thing about that HURT photos, is those who finished went through that FOUR times!

And, aw shucks, Karen - that was a great comment. Thanks.

I am generally pro exercise during pregnancy but I do think it is important to monitor body temperature and try to keep things on the cool side. I was recently dismayed at how hot I was getting even running outside (not pregnant as you know but TTC). My other rule of thumb when I was running while pregnant was that I tried not to lose more than a pound per session (as recommended by Clapp) through water loss i.e. I re-hydrated while running something I don't generally bother to do when not pregnant unless I am running more than 2 hours.

That is awesome. Not just because you ran that fast but because you are paying attention to yourself and doing what make sense for you! This is a powerful and necessary contradiction to the crazy fear and the cultural irrationality we are all exposed to about pregnancy. I am 7 weeks pregnant and running as fast and as hard as I feel like on that day thanks to women like you! Woohoo, a good run is always worth savoring. Here is to many more!

I think it's really great that you can do it!! I wish I could run that fast - I'm slow and I'm not pregnant. Share the secret with me please.......

I don't think you're crazy as much as I just don't relate. I probably *could* run that fast right now if I really pushed myself but it would feel like crap and I would worry myself silly that I hurt the baby (irrationally or not). I went to a spin class on Monday night the teacher kept reminding me to keep it aerobic when they were sprinting and just seems like the right thing to do (FOR ME).

I just don't really see the need to push right now but that's just me. There's a season for everything - in pregnancy, that means slow miles with the occasional pick-up if I feel like it, saving the hard stuff for post-partum. It also would seem like I am trying to prove some point to...someone...that I am still fast even when pregnant nah-nah-nah-nah-boo-boo (again, not that YOU'RE doing this, just that I know myself well enough to know that it WOULD be for bragging rights).

Part of me just worries that I'll get injured again like last time when I was in excruciating pubic bone pain. I stopped running around 26-27 weeks because I couldn't even lift my legs after each run without tears coming to my eyes. This time around, I'd rather run to the end even if it means slow, slow miles. I'd rather that than having to do the stupid elliptical for 13 weeks.

Glad you're feeling good! I am too, really, just know this is the last time I'll be pregnant and want to be as pain-free as possible.

I agree with a lot of what Chapples said. I don't think it is a question of whether or not it is dangerous in general. For most of the population, yes, speed work during pregnancy would be dangerous, obviously. For extremely fit runners whose bodies are already in that place, it would not be dangerous IF the body is responding positively. I think the important thing is listening to your body, no matter how fit or fast you are. That is always important to remember in running, but infinitely more so when pregnant, when the priority is the baby's health and not our own goals.

YOu are so not bragging. I love hearing about it. Keep updating.

I think as long as you are listening to your body (which you are)...you should be fine. If you are feeling sick from overheating, you body will tell you, then you'll know to slow down.

I have read about having too high of an internal core temperature during the first 10 weeks or so being risky (as PPC) said...but you are past that part already. I believe the internal core temperature is not supposed to go above 102 (I think, I'd have to go find the study I read about it) during the first 10 weeks or so for risk of neural tube defects.

i do think you are crazy because that is Fast. i haven' tbeen running long, but struggle to break 10 min/mile!!! :)

That is really interesting you bring up core temperature, because I have been researching it quite a bit and am almost ready to write a post. But the deal is, nothing significant has ever linked fever and neural tube defects. AND there have been two large population studies recently: one in Finland and one in Denmark which have shown no correlation between neural tube defects, miscarriage or still birth and elevated temperatures. In the Danish one, they looked particularly at long, high fevers in the first 10 weeks and found no effect. And this was with 24,000 pregnancies -so the best study to date. So the heat one can get while exercising should NOT be looked at as a threat any time during pregnancy. Plus we're so darn good at stopping if we're overheated anyway.

Already found a new best trail run photo of the year. I think it's in Australia. Excellent photographer.
http://1.bp.blogspot.com/_IoDbwwAfbtY/TT6bxhcOWgI/AAAAAAAAP18/eq1P5msIPjc/s1600/pan5b.JPG

Love that you found that. I honestly wish I could remember if I read it online, in a running/pregnancy book...grr...I don't remember.

I had a friend who's son was born with a NTD (spina bifada) and she did say she had a fever within the first few weeks of pregnancy. (I don't remember exactly how long or how high the fever was)...but the doctor's weren't sure whether that was the cause or not.

Then I think about how many women don't know they are pregnant (since the neural tube closes at day 23) and are exercising in extreme heat, taking hot baths, whatever...