Christian complained as I ran him over to daycare in the babyjogger. "Mom, why aren't you wearing the red shoes? They make you run faster." Even my son has turned into a living Salomon advertisement. And I did run a lot faster in those shoes. They were just too wet this morning to wear again.

I know they came out a long time ago (2012), but since I was so extremely impressed with them, I have to just say a couple things: They were desgined specifically for Kilian Jornet to run Western States in. They are light, breathable, 4mm drop and fit like a glove. Compared to my New Balance minimus shoes, they have incredibly good traction. I felt so confident and comfortable in them.

The problem was, yesterday I needed spikes.

Aside: Why is it I have never talked about Salomon shoes before on this blog? Because we live in Næstved and don't have access to a store with Salomon shoes, so I couldn't try them. I felt so fortunate to be able to try them in Hvalsø - and all participants had the opportunity to try a pair (model of their choice)﻿.

Back to yesterday: In what kind of a 10k race with 350 participants is the men's race won in nearly 44 minutes? I'm about to explain.
During my warm-up, I decided to run as much of the route as I could-- and I was shocked! You entered this thick forest brush and had to run straight through it- no trail- just felled trees, branches, roots, leaves - you name it - and then the red tape directed me out into --- a lake? What? Yes, we had to run though a lake where the mud at the bottom was deeper than the water. There were so many reeds that there would have been no point in swimming. I tried the lake crossing twice and then ran out in to a mud bath trail (it had rained the last two days and was still raining) and in my New Balance Minimus shoes I felt like I was making more sideways than forward motion. I didn't dare try a downhill in them. This is when I went to the start and asked Kim if I could test some Salomon shoes. I tried the same route again and it went much, much better. Now I was as ready as I could be to run.

In the meantime, SR had been out with the boys in the babyjogger-- looking for a fictitious ice cream parlor in the middle of Hejede Overdrev (aka sweet nowhere). How incredible is it that he came with the boys to support me? (45 minute drive each way. I get the feelilng he is committed to this relationship).

How do you oraganize a 10k cross race - that will become a single track trail race- with 350 starters? First, begin with a "Braveheart" start.

See video of the dramatic start


Then to avoid crowding, we ran the first km or so out over a wide field of wet long grass. 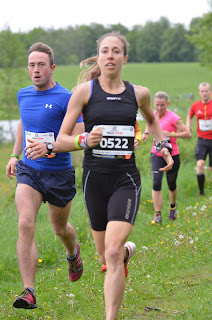 In about 10 seconds I am going to run into the woods, trip over a branch and land on my face (ok, not my face,  but pretty much every other body part). This is part of the charm of a cross country race. Although, I think I was the only one who did this... 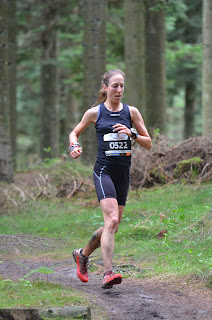 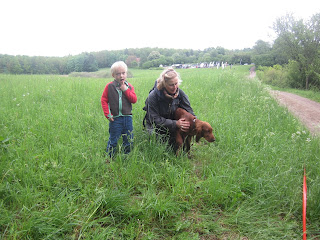 Christian, Mattias and SR managed to find me at four different points during the race. It was awesome. They didn't even compalin about the rain. I love my boys.

Oh my GOSH, I loved running with (behind) Dorte and Camilla. They are both from Blovstrød Løverne and are in command on those trails! I wish so much I could train with them more often. (you may recall Dorte from her win at Fyr til Fyr).

But as stated earlier, had I known how muddy it would be - and had I owned spikes - I would have gained a lot from wearing them.

I am excited that Kim Sørensen allowed me to take the S-Lab Sense pair home to try out a bit more. I will be meeting with him on Wednesday to start picking out some clothing, shoes and gear for Four Trails and UROC. I am excited about the new model of S-lab Sense that has more traction. Maybe I'll have more details after Wednesday. 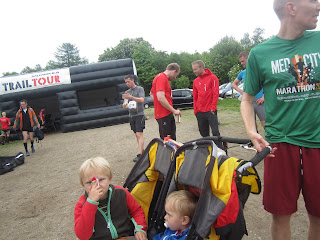 The results of the race are here. (the first place boy, Alexander Siedler Nielsen, came in in the top 10 for the men! He will be someone to watch in the future).


I did not know it was possible to be so sore after a 10k. I had hoped to just use it as a training run (replaced my tempo run this week), but I was so sore I could hardly run this morning. The good thing is, it is the best type of sore: in the muscles and not in the tendons or ligaments. I'll say it again and a million more times- trail running is awesome- just one more reason is- strength without injury.

An awesome race. No complaints from me! I only wish I could run it every week!

Edit: Thinking it over a bit more, the thing that set this race apart from others, beyond its difficulty and mudiness, was the Midievel feeling- the bugle & Braveheart start, the lead horse & the feeling we were fighting for our survival in an ancient forest. Nice.

ah, that explains why all of the salomon test shoes were so wet today :-)

Awesome race and congrats on the Salomon sponsorship! That's really an accomplishment (and perhaps one you didn't always see coming - I read this blog in the old days when you claimed not to be fast!).

I'm always impressed by how much you do with your work, your family, and your running/biking/other exercise - I have no idea how you find the time to do all of that at a high level and still blog! Would love to hear more about how you fit it all in every day if you get the chance to write about it sometime.

Thank you so much, Liz. Haha. Well, I agree with the old me then since I am still not fast- though certainly getting a sponsorship of this magnitude is a huge incentive for me to train smarter and harder.

I think finding the time has to do with the flexible job I have and my periods of mania where I need very little sleep. Of course I crash after they are over, but I sure do become productive. Plus running has always given me a lot of energy. It's just a question of not spending too much time training- but enough to keep improving. (not that that's easy, but it is the goal, and I think it's possible)

That looks way fun! I would have taken the chicken way around that lake, though. I must need more character.

That's interesting you credit the flexibility of your job. It seems more and more apparent to me that a flexible job is nearly a prerequisite for a satisfying life with time for hobbies, especially ones requiring big time commitments or travel. Living in Europe rather than the U.S. must help, too! I would love to move back to Germany and reading about your life in Denmark only makes it more tempting.

I'm sympathetic to your periods of mania, though - from what you've written before, it sounds as though they're hard to deal with even if the crash comes later. I (and surely many readers) do appreciate your honesty about it and hope that you're doing okay.

Okay so the other thing I was going to tell you about was that on the plane home from Salt Lake City today, the Delta airline magazine had a little blurb about how Icelandic horses have the special tolting gait! I was all excited going "I know about that!!" All thanks to you:)

THAT is a cool coincidence, Alicia. Thanks for telling me that. And I have my aunt to thank. She is a true horse expert.