Where to start? Well, the taper and eating frenzy began on Friday. The triathlon was on Sunday. On Saturday night, we attempted to go to bed early. SR of course fell asleep right away, but I lay awake until 3am listening to the constant barrage of thunderstorms outside and admiring the sleeping Bois. I guess I was nervous. We got up at 6am. 3 hours is good enough for an Olympic distance triathlon, right?... Anyway, SR wouldn't take any of my complaining. He was too excited.

I ate four enormous cookies that my mom had brought and felt a little sick. We drove to the race and hurriedly set up our transition equipment. Everyone was chatting about the canceling of the Olympic distance. They announced over the loudspeakers that the Olympic bike route had been flooded, so everyone would be doing the sprint distance. I gave up any hopes I had of doing well at that point. But, of course, it would still be fun.


With little time to spare, I had my mom and SR help squeeze me into the wetsuit. Why was it not going on as easily? SR does have keen eyes... "It's inside out!" He yelled right after this photo: 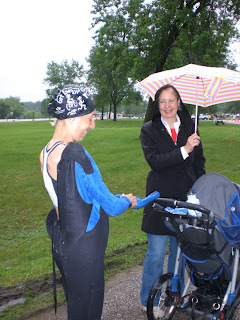 Everyone was already lined up and I was the second wave, starting in 6 minutes. Well, I learned how to get into that wet suit in half the time it had taken me before and ran into my wave of ladies. Every woman was wearing a wetsuit, at least in my intermediate distance. I felt a bit bad for SR in his baggy running shorts.

The Swim
The water was 69.5 degrees and felt so wonderful. I started in the back of the pack and lots of women started out quickly. They also tired out quickly and I crawled closer and closer to the front. I actually went back and forth between keeping my head out the water altogether and breathing every four strokes. I seemed to go the same speed either way. It is MUCH harder to breath in a lake than a pool. I normally go 10 strokes between breaths in a pool. 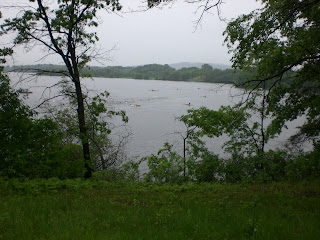 Transition #1
This involved running up a long ramp, getting out of the wetsuit, changing into socks and shoes, putting on my helmet and running my bike out of the transition area. It went fine, but I felt like a deer in headlights.
Time: 2.28 minutes (alright maybe it didn't go that well)

The Bike
By this time it was pouring rain. But I didn't mind at all. It just kind of felt like a leisurely ride. I don't really know how to ride quickly. I passed one woman. It was pretty uneventful, except for the beautiful hills. The rain at times felt like hail, but it was glorious. Near the end, I realized I would need to pee soon. Seeing as I was already completely soaked and the rain was still pouring down, I just peed on my bike. Somehow I doubt this is normal tri behaviour. Anyway...
Distance: 17 miles
Time: 59.18 minutes

Transition #2
I couldn't remember how to put my bike on the rack, kept trying to hang it from the BACK of the seat... dar dar dar. Then I looked around... OH, the FRONT of the seat hangs the bike. Geez.

Time: 52.3 seconds
The Run
I felt quite wobbly at first, but ran my heart out. I just kept passing people. I must have passed 50 people. Okay, maybe not quite, but I felt great! I actually PR'd on the run (yes, the fastest race 5k I've ever run). I ended up taking first for the women in the run, too, which at least sounds cool.

I finished with SR running next to me (he had already finished and ran back). We were both full of adrenaline. We went and met my mom and The Lorax (aka The Bois) and I threw up everywhere.
Then we took this picture: 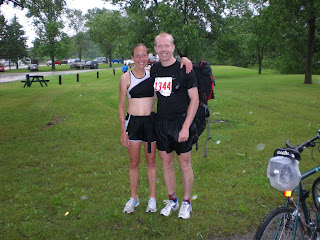 I got 11th overall and 2nd in my age group.
My overall time was 1:36.14
I've got a lot of room for improvement in the swim and bike, but it was a really fun first attempt!
We stuck around for the awards and played with The Bois. 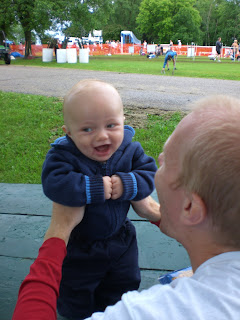 Here we are getting my second place mug: 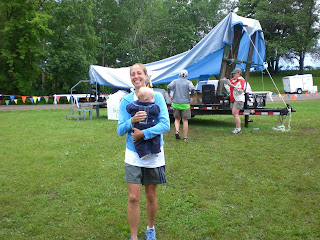 After the race, we drove to a Bed & Breakfast in Red Wing, MN. We had a romantic evening, which somehow involved going to bed early and waking up late. After a 3 course breakfast and interesting conversation with a couple from Colorado, we drove to Frontenac State Park. This park has a big network of trails, mostly overlooking the gorgeous Lake Pepin. It was a perfect sunny day. We took turns running with the baby jogger along a paved path and exploring the dirt trails. In no time we had run for almost 4 hours.

I don't think SR and I have ever been as close as we were after that weekend. I think there is nothing we don't share. I wonder sometimes if he knows how completely I love him. After we spend a whole day running together, laughing at our beautiful son, perhaps we are as close to heaven as living humans can be.

Running Song of The Day: Gold into Straw by Brendan Benson

Congratulations! You've inspired me to try a triathlon. Where did you get your bike? Just off of craigslist or something? And your love for SR is so sweet and inspiring too.

A lot of people do pee on the bike. I don't. But anyhow, be careful -- my friend got pee INSIDE her bike (via the seat tube). It's not good for the bike and it's kind ick.

Sounds like a fun weekend. I love Red Wing -- such a cute town.

My, darling, I don't know, I think I am more happier with the last paragraph than the tri itself, althouhg it's amazingly awesome how great you both did (but not surprisingly) - but then again, I am all about ooyee-gooyee:)

Another triathlete here who doesn't pee on the bike. I have before and just find it gross to carry pee in my chamois. But many do...it's not an odd thing at all in triathlete land.

I told you that you might want to practice transitions. :)

Congrats on your tri!!!

((Oh and I've heard of many peeing on the bike. I have not done it and intend to hold out.))

Congrats on a fun, successful first triathlon! I can't believe you ran a 5k PR off swimming and biking first. I think you better enter a 5k soon and properly lower that PR.

I agree with the earlier poster, it's like you and SR are good at everything you do, road running, ultras, triathlons. What's next? ;)

Thanks, also, for showing your readers about good, true, full love. It's lovely to read about, and it must be outstanding to live.

Abbie, I'm so glad you're doing a tri!! I got my bike at a local bike store on sale. It is a Specialized women's bike and cost $799.

Danni, pee inside bike... yuck. I didn't consider that one.

Olga, you did come to the right place for "ooey-gooey."

The Chapples, very interesting that this peeing thing is generally known by triathletes.

Heather, yeah I should have practiced transitions including putting the bike up on something.

Meghan, thanks for making me smile. You're right we'll have to find a 5k to see how the time compares. Now I need to visit your site to see how the Kettle Moraine 100k went.

Holy Cow, SR and SLG are *Rock Stars*!!!! Great job to both of you. Congratulations on your placements and WOW on the PR. After all that effort, besides. Man, that kid is cute. You just want to kiss his cheeks all day long.