Ahhh, back to talking about things that 95% of the world population doesn't care about.

I am frequently contacted by women about whether excercising negatively impacts lactation. But what if this question were asked in reverse?

Does breastfeeding result in slower running times? (Okay, I have to say it: not actually breastfeeding while running, people! Very few can/try to pull that off...))

Let's take Liza Howard as an example. She is the 2010 winner of the Rocky Raccoon 100 miler in Texas. I became interested in her because I will be racing with (er, behind) her in Hells Hills 50 miler in less than 2 weeks. She ran the 2010 Rocky Raccoon in the amazingly fast time of 15:45. But last year, in 2009, she ran it in 21:32. She ran nearly 6 hours faster this year or had a 26% reduction in time! Quite a difference for 1 year of training. But could it in part be attributed to the fact that she was breastfeeding in 2009 and not in 2010? (I should mention that not only was she breastfeeding, but she physically stopped to breastfeed her son every 20 miles).

Well, she has also hired a running coach and is training better, so it is very hard to determine exactly how much of the improvement is due to not breastfeeding.

Let's take my racing times as an example. I have run 1 race seriously in my life when I was not pregnant or breastfeeding and that was the 15k 2 weeks ago. My previous 10k time on a flat comparable course was 42:44 (that was in December). I stopped breastfeeding when The Lorax turned 2 in February. My next 10k time (from 2 weeks ago) in a 15k race was 41:08. This is a 3% reduction in time. Not quite as overwhelming of a difference. But something.

This is by far the most unscientific scientific post I have ever written. But I can find absolutely no research on this subject. I can't even find an inane discussion on Yahoo Answers. I may just be the only person on the planet who cares.

But if anyone is still reading, my question is this: Can I expect a huge improvement in my 50 mile time now that I'm not breastfeeding? Like say, a 26% reduction in time from my PR of 8:49 (while breastfeeding) to 6:30? Ha. Okay, I just had to exaggerate a bit. Anyone out there have first hand experience? Liza Howard, you are also allowed to chime in. 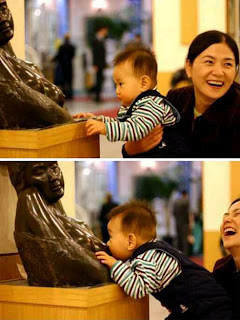 This season will be when I find out for myself if there is a difference. My 2 year old just weaned and I have yet to race this season. Last season lots of nursing was going on!
I was thinking of this during my last long run.

I am very interested in this and will see first hand the difference breastfeeding makes soon. I spent 2009 "racing" while pregnant and this year I will see if breastfeeding affects my times at all. Although I am almost 2 years from a nonpregnant race or PR, but I'll let you know if it makes any difference to my 2008 times. The new weight in my chest alone may make a difference in my times.

Think inability to train while breastfeeding to your full potential. Heavier boobs to carry around. Hormonal swings. Hopefully, more sleep (when not jumping mid-night to stick a nipple into a baby's mouth). Re-distribution of fat in the body (see hormons).
Honestly, those margins you have and Piccola has are so miniscule, I wouldn't even bother to look at them as anything. When I ran short road races, in a year, whithin 2 weeks span, I could have 2-3 minute difference either way.

In my experiment of one:

Hard to say, but I do know that I seem to have a lot more energy now that I'm not breastfeeding. I thought it was hard to keep up with my nutritional needs with the running + extra kcals going towards breastmilk.

I'll be interested to see others' responses (not that it would have made me quite earlier than I did just curious if others had slower times too).

The comments on this blog are way more informative than the actual blog.

All of your thoughts have made me come to some new conclusions and The Chapples, your comment especially struck a chord with me.

There are two big factors at play when it comes to breast feeding and running:

1. One has decreased energy when training. I personally exerperienced a huge increase in energy once I stopped breastfeeding and my training was thus more effective.

2. When it comes specifically to racing, ultras are the hardest when breastfeeding because of that increased need for calories and the way you lose your reseve for everything more quickly (electrolytes, sugar, energy).

I am currently breastfeeding a 7 week old, and so far I don't feel it has effected my running at all. Just gotta time runs around feedings. I definitely am hungrier though. I haven't run an ultra yet, but I suspect I will while breastfeeding, and I'll have to see how my energy levels are.

I haven't finished breastfeeding yet, but I certainly hope that it's slowing me down - that's what I've been using as my excuse these 14 months! I also know someone who used to be on the Tasnmanian national team, and she and her husband felt that she wouldn't be able to be fit again until she stopped breastfeeding.

Clea, I remember the feeling of being light and baby-free so early post partum. It actually wasn't until my second 50k that I was thinking, you know this breastfeeding is taking a toll. Not to get you scared; I HOPE you never notice a difference.

Amazon, interesting tidbit from Tasmania. Makes me wonder if there are breastfeeding women on any other national teams. Kudos to you for continuing to breastfeed.

I enjoy your blog as when I was training and pregnant and nursing, I felt like I was the only one!

Thanks, Joannie! Interesting stuff. Quite an improvement in your marathon time now that you're not breastfeeding. Gives us other ladies hope :). Best of luck with the spring season!

Thanks for this post. I have been thinking about this a lot lately with a breastfeeding 12 month old and a big race season ahead. I have PR'd at every distance from 5K to marathon in the past year but have not done any ultras while breastfeeding. I think ultras are where breastfeeding could cause an energy deficiency. My first is a 50 miler in one month and I am trying to decide if I should wean by then. From what I read in the comments, it sounds like most women see measurable improvement in both race times and energy levels after weaning, so it is tempting!