1. Structured training with speed works.
2. Weight is NOT the most important factor in speed.
3. Know your exact pace before you run the race.
4. Tie your shoes in quadruple knots.

Now to the story.

What a weekend! Started out with SR and I eating the best food I have had since we moved to Denmark: extra spicy thai curry with shrimp and vegetables at a new retaurant in Næstved, Ban Chang. Pure bliss. If I ate exclusively Asian food from this moment on, I would be thrilled. Let me put in bluntly: Eurpean food is bland and not that good(way too much meat, cream, cheese and bread) unless it's strong French cheese (the kind that tastes like old, dirty socks) or the kind of French mustard that makes you cry.

Saturday was SR's turn to race, or should I say, he offered to race Saturday and watch the kids for my race on Sunday. It is not a surprise he was voted the most under tøflen "under the slipper" in his marriage by a bunch of his guy friends on Saturday night (this is of course what Americans call "whipped"). Sorry, ladies, he's taken.

He ran an extremely technical, hilly 8k race on icy trails. Here he is coming in second to the finish line. 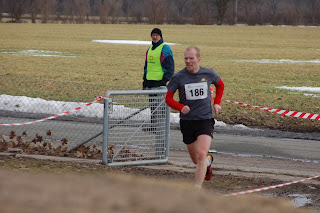 And in first place for the women, came Mette. Remember this girl, as I predict she will be in the top 5 in The Copenhagen Marathon this year. She is an amazing runner and only 24. 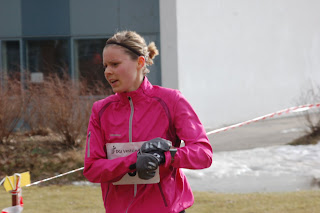 Concensus after the race was it was an experience, though no one dared say it was a good or enjoyable one.

Sunday was the 15k Nike Test Race in downtown Copenhagen. This was a "target" race for me and I was nervous. With over 4000 registered runners, this was by far the largest race I had participated in. My goal was under 63 minutes and perhaps in the top 5 females.

The Lorax and I woke up at 6:30 to take the train from Næstved to Copenhagen (just over an hour). I had a shining moment as a mother, as you can see in the picture, when I packed a that breakfast box for the Lorax. 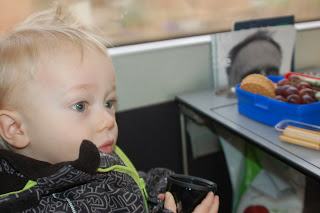 The sun was shining and I knew it was going to be a great day. Partly because we were going to the Copenhagen Planetarium with the kids after the race. I always feel kind of guilty about Natali having to come to all of our races. 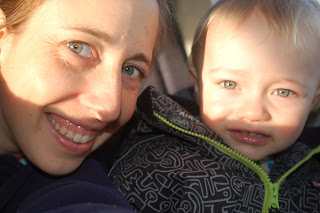 We met SR and Natali at Østerport train station. I ran to the start and they walked.
I felt great and literally squeezed my way through thousands of people to get up to the men with the 4:15 balloons. I had to do some rapid math to figure out where to stand as I still think in terms of min per mile. But 4:15 min/km would put me at about 6:45 min/mile. Seemed reasonable and about right for 63 minutes. The women near me were eyeing me up. I am sure they were thinking I was standing in the wrong place, judging by my clothing, posture, pseudo potbelly.

The start gun went off and I started my music and garmin, not expecting to wait 10-20 seconds before I crossed the start line. But we were a huge herd. Happily it was chip-timed, so no one lost those valuable seconds.

In the first 5k, I just passed and passed and passed people. I felt amazing. I actually had to hold back to keep my time for the 5k around 20 minutes. I usually hate running in big cities, but when the sidewalks are cleared and there is no waiting, it is wonderful. I actually passed my friend Tanni, who had beaten me by over a minute in a 10k last year. 20:20 for the first 5k. 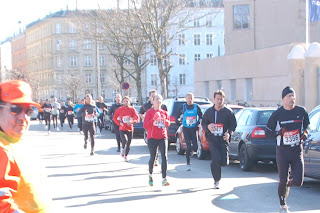 Here I am cruising (completely off the gound, nonetheless) just after the 5k. One thing about living so far north is that sunny days are almost blindingly bright. The rest of the photos after this one had to be doctored.

SR let me know from the sideline I was in 6th place for the women.

At around 7k, I could sense Tanni gaining on me. Was I slowing down? Garmin check: no, not really. We started running side by side. And then something was wrong with my right foot. What was happening? Ahhhhhhh!!! Shoelace. Untied. For a few milliseconds I wondered if I could run the remaining 8k with an untied shoe. "Shit!" I cried out above my blaring music. 2 more milliseconds and I was bending over tying my shoe. I knew Tanni was smiling on the inside. Hard to judge the amount of time lost. 10 senconds?

What happened next is a perfect example of why I will never be an elite runner. I was so mad about the stupid shoelace and could not fight this overwhelming urge to "get revenge" (on the shoelace? God? Thor?). I saw Tanni, now far ahead, and told myself to think of nothing but catching up to her again. At one point my garmin said I was running a 5:11 pace. Real smart. Well, I caught up to her alright. And we ran next to each other for a while, battling, exchanging glances. At 10k I looked at my garmin, and minus the 10 seconds lost before the start, the 10k time was 41:08. A huge 10k PR for me. My previous PR was 41:48.

We kept battling for a km or so and then Tanni pulled ahead. When this happened, I entered a severe midrace depression. My legs were in pain from that stupid sprint. Another woman who I was sure I could beat passed me.

But then, I saw the 4:15 balloon men: the pacers I had started with. They passed me. "Just stick with them no matter what" I told myself. And I did. Good Morning by Rogue Wave came on my iPod and I felt better. Just the right tempo and a good melody. I saw SR and Natali and The Lorax. They looked happy. 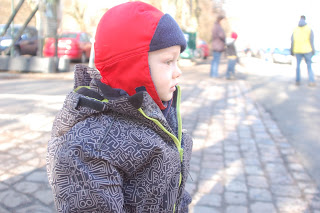 I kept going at the 4:15/km pace, shutting out the thought of sore legs. 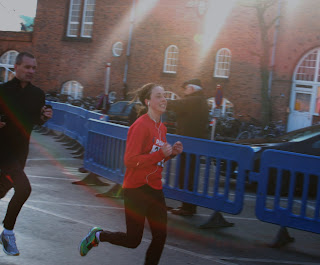 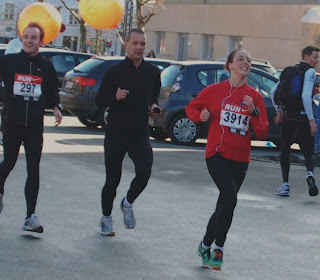 Here I am nearing the end. And the pacer behind me appears to be nearing my end, with his eyes.

I wouldn't make it under 63 minutes, but close: 63:22. And I wouldn't make top 5 for women either, but again, close. No reason to be down. I had a huge 10k PR and a very respectable time. My goals were a bit ambitious, but I'm no worse off for it. And I am a much faster runner than last year.

Tanni had to laugh when she saw me at the finish. She had a good point in saying I wasted a lost of energy with my erratic racing style. I must have caught up to her and passed her only to be passed again 10 times. She's 23 and learned this a long time ago. I'm 30 and may never learn.


The rest of the day was fantastic. 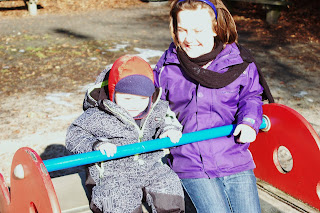 And I'm looking foward to a fast 10k next weekend, where I'm hoping to get near 40 minutes. So yes, the training is working, gosh darn it!


Running Song of the Day: Good Morning by Rogue Wave.

Have to point out, the smile never wore off your face. Congrats!

You ROCK! Congratulations!
I find when the unexpected happens (shoelace untied, person I expect to beat goes out way too fast) it helps to have a mantra... I like using "run smart run smart run smart" which I repeat over and over in my head to curb the urge to over react.
p.s. After you are done quadruple tie-ing your shoelaces, take the ends and tuck them under the criss crosses of the laces so that no other runner can step on them!

Nice race report! Golly The Lorax seems to have your eyes in that photo of you both...and well done on being caught smiling a lot in your photos - that would be an accomplishment for me!

I cringed and felt so terrible for you as I read about the shoelace, but you recovered so well from the unexpected. Congrats on the PR 10K and with an untied shoelace, no less! Sounds like you had a great finish to the race and a wonderful time. So happy for you.
Also, that breakfast for the Lorax looks really good.

In picture #3, the Bois looks like Alfred Hitchcock and in #6, like Winston Churchill - but he manages to be adorable anyway.

Steve, I definitely see the Churchill. But let's just hope the adorable is what prevails into adulthood.

Awesome job girl! You're speed and interval work is definitely paying off. Great way to push through it after the shoelace and losing Tammi. Best of Luck in the 10K - anything close to 40 is a super time.